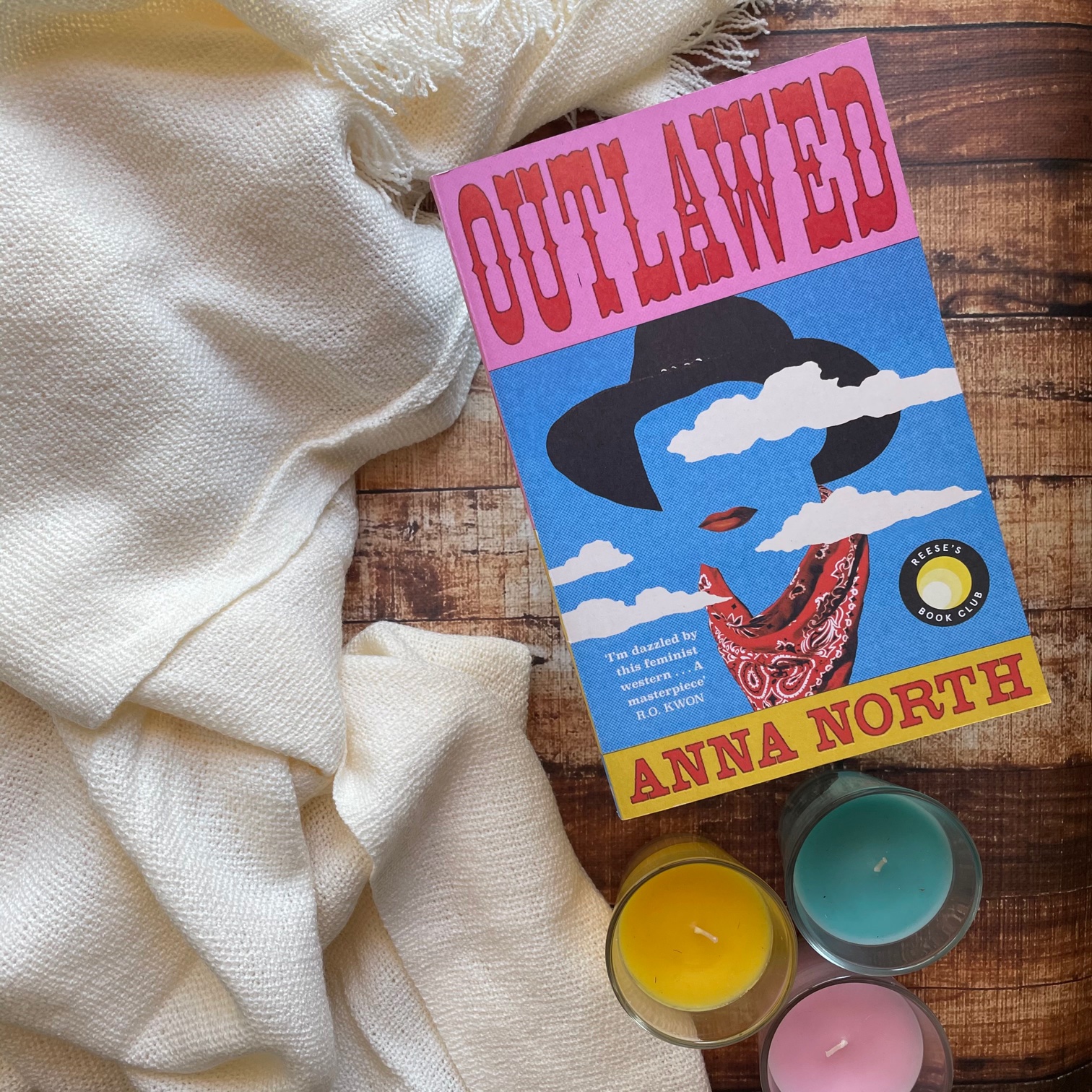 On the day of her wedding-dance, Ada feels lucky. She loves her broad-shouldered, bashful husband and her job as an apprentice midwife.

But her luck will not last. It is every woman’s duty to have a child, to replace those that were lost in the Great Flu. And after a year of marriage and no pregnancy, in a town where barren women are hanged as witches, Ada’s survival depends on leaving behind everything she knows.

She joins up with the notorious Hole in the Wall Gang. Its leader, a charismatic preacher-turned-robber, known to all as The Kid, wants to create a safe haven for women outcast from society. But to make this dream a reality, the Gang hatches a treacherous plan. And Ada must decide whether she’s willing to risk her life for the possibility of a new kind of future for them all.

A feminist and dystopian Western novel, Anna North’s Outlawed is a rollicking adventure for fans of The Handmaid’s Tale and Cormac McCarthy.

Set in 1894 after a Great Flu has wiped out a significant portion of the population, fertility is considered sacred. Women exist to be married and impregnated, so when our protagonist fails to become pregnant after one year of being wed, she is suspected of being a witch. To avoid hanging, she has no choice but to escape.

“My throat was scraped raw and my whole body aching when, out in the black to the left of the road, I heard someone playing a fiddle. The music was lively and dreamy at the same time, a tune I’d never heard but that reminded me of stories Mama told us when we were very little, about pirate ships in the time before America, about elves and goblins meeting at midnight in the woods.”

Outlawed explores the suppression of women, but also paranoia and superstition, and how this can fuel hysteria when left unchecked. Outlawed is about the outcasts taking control — barren women, gay women, black and non binary people. They escape their oppressive surroundings in search of a better life, where they are accepted by others. Where they are believed.

The strength lies in the first person narration, which captures an intelligent, worldly protagonist, without ever feeling self-indulgent or insufferable. Anna’s writing is eloquent and seamless, and her way of describing even the simplest of visuals is a most joyous reading experience.

“Notkon tried not to show it, but I could tell he was intrigued. I took the book out of my satchel and laid it on the counter before him, open to the diagram of the woman sliced open to reveal the baby inside. He recoiled, then leaned closer. He began flipping pages. The minute hand of the grandfather clock ticked once, then twice.”

Admittedly, I don’t think I’m the desired reader for this book, or perhaps there was just something that didn’t quite land with me, because I couldn’t help but feel the plot got lost a bit, like I didn’t see a clear direction with the book. Our protagonist does seem to wander aimlessly for quite some time, and it isn’t until the final pages that her story seems to gain some significance. Until then, the pacing slows, the conversations still, and I was bored mid-way. In a way, this book reminded me of the TV series Westworld, but in this instance, you don’t have the visuals to keep you entertained.

Additionally, our protagonist Ada joins The Hole in the Wall gang, but a lot of the other members merge together in my mind — their characterisation does not feel distinct enough for them to be memorable. Characters blended together. The leader of the Gang, named Kid, felt very bland and two-dimensional, I was expecting a leader that was a lot more dynamic and charismatic than the one we actually got.

If this book were any longer, I fear I would’ve stopped long before the end.

Reading reviews of this book and I realise everyone else seems to love it, so perhaps I’m just not the intended audience. Another time in my life and perhaps this book will speak to me a lot more.

“Mama had always told me never to drink anything offered to me by a stranger, but I was thirsty and exhausted and confused and I took the glass and drank. I’d had champagne only once before, on my wedding day, and this was different — sweeter, spicier, with a strong poisonous scent like paint thinner.”

Recommended for seasoned readers, not reluctant ones.