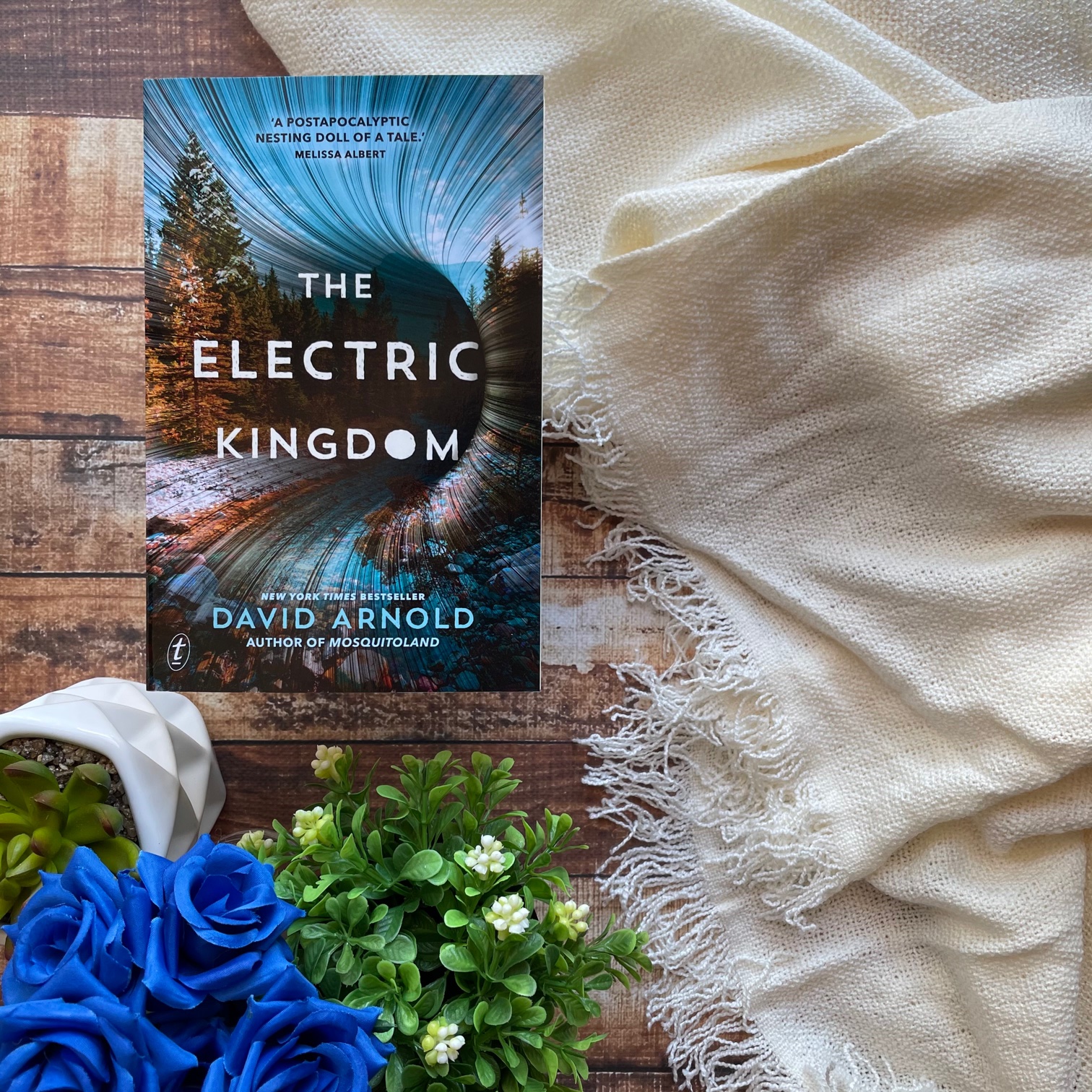 A genre-smashing story of survival, hope and love amid a ravaged earth.

A deadly flu has swept the globe, leaving a shell of the world that once was. Among the survivors are eighteen-year-old Nico and her dog, who are on a journey devised by Nico’s father to find a mythical portal; a young artist named Kit, who knows almost nothing of the world outside the old abandoned cinema he was raised in; and the enigmatic Deliverer, who lives Life after Life in an attempt to put the world back together.

David Arnold’s post-apocalyptic YA novel The Electric Kingdom is an ambitious saga, a unique twist on the frequently-tackled scenario that is the near eradication of humanity. After a swarm of flies, as yet unbeatable, descend on Earth and wipe out most of the population, few remain alive. We meet a cast of characters determined to survive in a barren wasteland, a ravaged world full of danger.

Not your stereotypical fantasy novel about the end-of-the-world, although perhaps a little familiar during current times, The Electric Kingdom is written in third person and switches between three characters — eighteen-year-old Nico, twelve-year-old Kit and the mysterious and unnamed Deliverer, whose role in this story doesn’t become clear until the end.

Readers will find themselves enthralled in the journey until the final pages.

“The room was quiet, the brush of a hand in his hair. Kit debated whether to tell her what he really thought: that when he stood at the open window of his art classroom, held a breeze in his face, he had long ago resigned himself to the reality that he would never know where that breeze came from, or where it was going.”

David’s writing style is quite stripped and minimalistic, which is ironic considering this book is over 400 pages. Dialogue is taut and clipped, and it works. Prose is seamless, with short sentences. David only reveals information that is absolutely necessary, and readers will appreciate it.

There’s a strange sort of atmosphere to this book, like there’s something larger at play and you know you won’t understand it until the end. Characters mention deja vu, like they’ve been through these events before. There are moments of fear and tension, but there are also some really tender, sweet moments between characters. Moments where you get an insight into how their lives might’ve been if the flu never happened.

“When the entirety of one’s universe is an old boarded-up farmhouse, there is no greater treasure than a dusty shoebox full of photographs. All smiles and kisses and travels and meticulously positioned foods on butcher blocks. Nico’s favourites were the ones from her parents’ honeymoon in Italy.”

Admittedly, the secondary cast of characters do blend together in the book. When Kit and Nico’s journeys become embroiled with others, and we meet multiple other characters of a similar age, it was hard to tell them apart. Their voices didn’t feel overly unique, and their experiences were quite similar. When some of them died, I didn’t feel much of an emotional response.

“Dead towns galore. Kit was amazed at just how many, small and tucked away. These days, he felt more breeze than human, floating in and through all these little towns, on the lookout for dreamers, Knowers of Things in open windows, observing their little worlds, wondering What (if anything) Lay Beyond.”