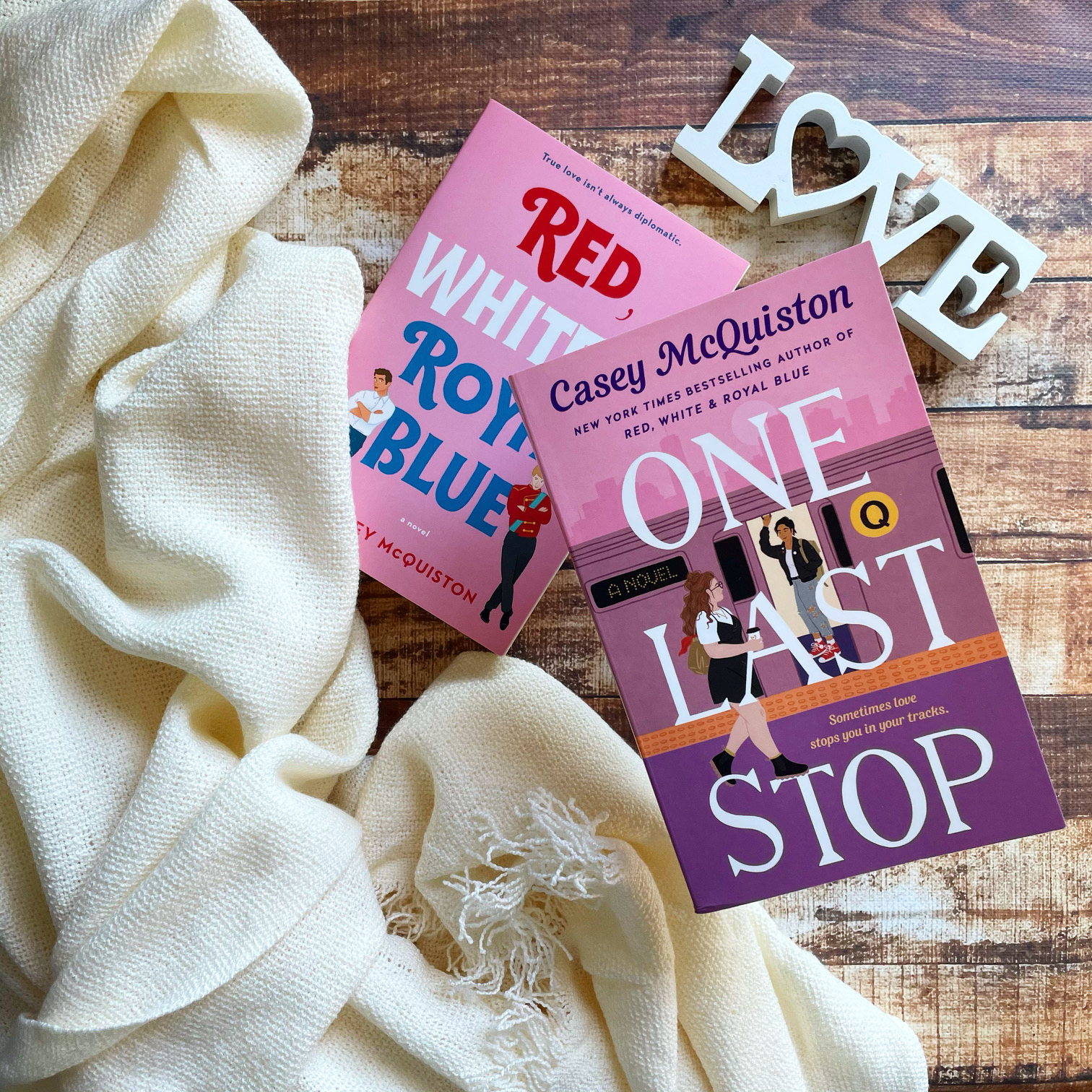 For cynical twenty-three-year-old August, moving to New York City is supposed to prove her right: that things like magic and cinematic love stories don’t exist, and the only smart way to go through life is alone. She can’t imagine how waiting tables at a 24-hour pancake diner and moving in with too many weird roommates could possibly change that. And there’s certainly no chance of her subway commute being anything more than a daily trudge through boredom and electrical failures.

But then, there’s this gorgeous girl on the train.

Jane. Dazzling, charming, mysterious, impossible Jane. Jane with her rough edges and swoopy hair and soft smile, showing up in a leather jacket to save August’s day when she needed it most. August’s subway crush becomes the best part of her day, but pretty soon, she discovers there’s one big problem…

Casey McQuiston’s One Last Stop is a heartwarming romance, the perfect long weekend or holiday read. Her previous novel Red, White and Royal Blue was an instant favourite of mine, so of course I was excited to read her latest release.

I’d recommend you go into this book without reading too much about the plot. I’ve actually removed some of the blurb from above to stop readers from knowing what the twist is. Because it’s quite unexpected in the book, and I think it’s a fantastic twist that works better when you don’t see it coming.

“And the thing is, in New York, everyone ends up worn down by the MTA and tourists and rent prices. Everybody’s seen it all. But that also means, sometimes, everyone is the smallest nudge away from delirium — from being trapped on the subway on a Wednesday morning and turning it into a ‘90s hip-hop dance party.”

When August moves into a NY share-house apartment with three other people, I instantly felt like I was reading about an episode of New Girl.

One of the strengths of this story — apart from its originality and characterisation — is the dynamic between August and her roommates. Conversations are funny and whip-smart, and dialogue captures all the personalities with ease. I found the friendships in this story just as interesting to read about as the romance that the story is centred around. Young women, particularly young queer women, will be able to see themselves in this story.

“There are two things coiled in August’s chest these days. The first is her usual: anxiety meets full-on dread. The part of her that says, trust nobody, even and especially anyone that pushes softly into the chambers of your heart. Do not engage. Carry a knife. Don’t stab them, but also, maybe stab them if you have to. The other, thought, is the one that really freaks her out. It’s hope.”

Admittedly, you do have to stretch your imagination to follow the storyline. The circumstances surrounding Jane become quite hard to believe as time goes on, and the ending is also a bit of a mind-boggle. But if you push past that, One Last Stop is a really moving story about love and how it can persevere even in the most unlikely of situations.

I’m glad this book is less thirsty than Red, White and Royal Blue. I probably loved Casey’s previous book more, because I loved the setting a bit more, but the only downside to Red, White and Royal Blue is the graphic, detailed, over-the-top sex scenes were a bit much for me and I found myself skipping them towards the end. But luckily this book has toned it down quite a bit, and whilst there are sex scenes, there are far fewer. Although, personally, I wasn’t a fan of the sex-in-public-on-the-subway scene. Yeesh.

“Jane talks to everyone, but she never misses August, always a few sly words or a quick joke. And August wonders if maybe, somehow, Jane thinks about it as much as August, if she gets off at her stop and dreams about what August is up to. Some days, when she’s working long hours or locked up in her room for too long, Jane is the only person who’s kind to her all day.”

Recommended for contemporary romance readers — those moved by young love, and that time in your life where you’re trying to figure out your life. There are elements of magical realism, speculative and sci-fi in the story, but if you go in unprepared I do think you’ll love the twist just as much as I did. Readership skews female, 16+