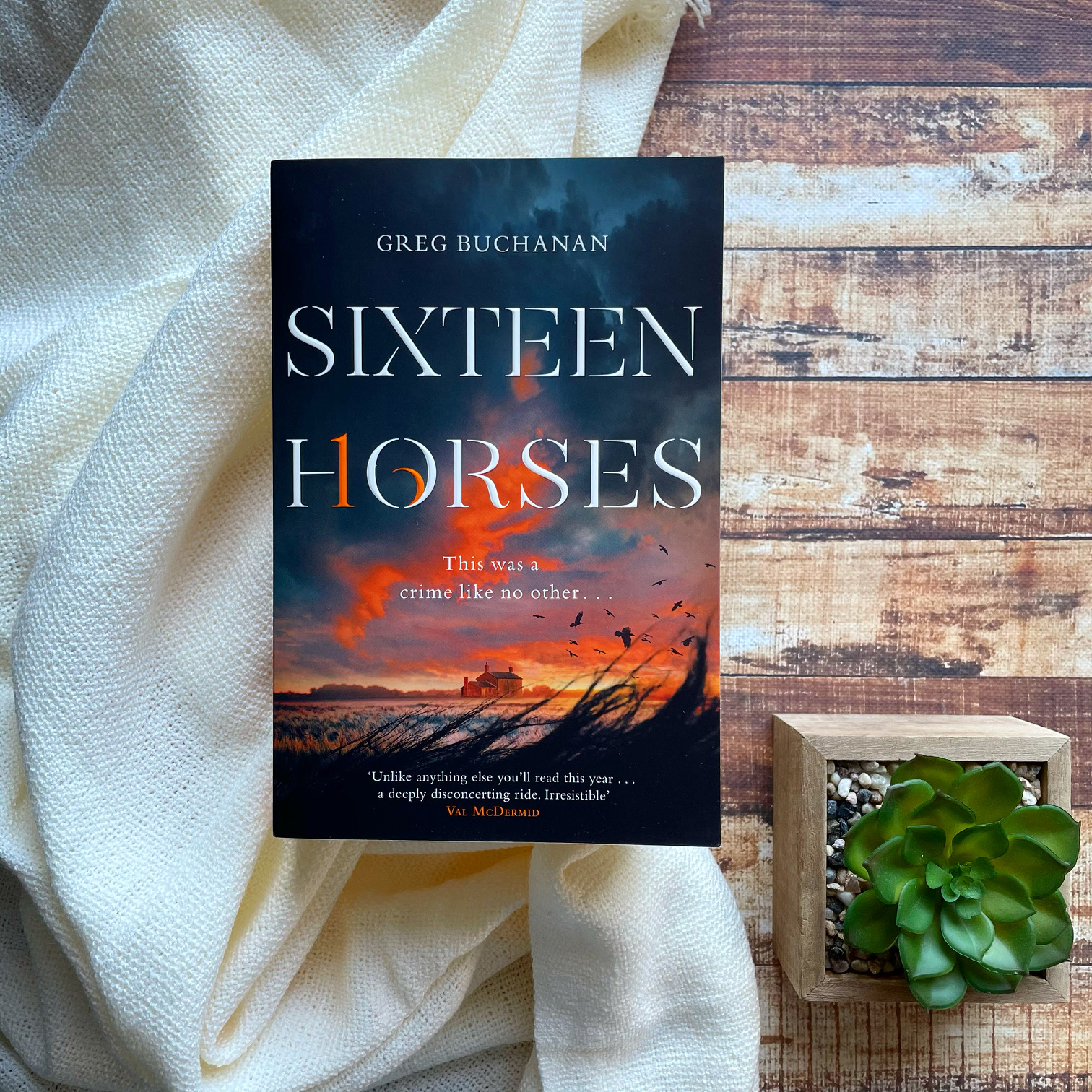 She thought of the horses, of the eyes in the earth.
She thought about that number, sixteen. That strange number . . .

Near the dying English seaside town of Ilmarsh, local police detective Alec Nichols discovers sixteen horses’ heads on a farm, each buried with a single eye facing the low winter sun. After forensic veterinarian Cooper Allen travels to the scene, the investigators soon uncover evidence of a chain of crimes in the community – disappearances, arson and mutilations – all culminating in the reveal of something deadly lurking in the ground itself.

In the dark days that follow, the town slips into panic and paranoia. Everything is not as it seems. Anyone could be a suspect. And as Cooper finds herself unable to leave town, Alec is stalked by an unseen threat. The two investigators race to uncover the truth behind these frightening and insidious mysteries – no matter the cost.

Sixteen Horses is a story of enduring guilt, trauma and punishment, set in a small seaside community the rest of the world has left behind . . .

Greg Buchanan’s debut thriller Sixteen Horses is set in a small English seaside community, and follows the discovery of 16 severed horse heads on a remote farm, partially buried. The mystery soon unravels into much more than just murdered animals, drawing the reader in with secrets and a multi-layered crime.

Everyone holds secrets in the secluded town of Ilmarsh — marriages are fraught, relationships are tested, and there’s a lot for local police detective Alec Nichols to uncover. The initial crime feels quite unique to the genre, and the story takes you on quite a journey as you work to figure out who killed the sixteen horses.

“The killer had secured the horses in the ground by digging holes, dropping the heads within these holes, caking soil around the flesh, then spreading loose dirt to help the skin blend in with the surrounding earth. The purpose was to delay them being found, but not indefinitely. To make the realisation itself a moment of power.”

Similar to other rural crime novels, the strength lies in the setting. The dry, desolate, stretched town where nothing really happens but everyone manages to possess some dark secret.

Stylistically, the book feels quite jagged — stop-and-start. Quotes are scattered throughout, as well as short brief chapters. Each passing day is clearly marked, and some chapters towards the end require a re-read to grasp masked plot — twists you missed or didn’t see coming. Greg’s writing style feels very poetic and lyrical, keeping pace on each page and maintaining intrigue. There’s a dreaded feeling of foreboding as you make your way through the story, which is the sign of a great crime novel.

The ending will satisfy readers.

“The teenage angled away from the rising sun. Her whole face convulsed, forcing a sneeze out onto the damp mossy rock beside her. In the early light, droplets dribbled down into the miscoloured marsh below. The void behind her nose ached. She was alone.”

Admittedly, I did confuse some of the secondary characters with each other. Whilst written in third person, the POV does shift between quite a few different characters and after a while they all start to merge together. Perhaps the number of perspectives could’ve been stripped back?

“The journey took a few hours, enough for the specialist to feel queasy without travel sickness pills. Trains weren’t normally too bad, and driving herself, that was fine, but the carriages heaved at slight angles along the rails. Her body, her mind — they lost their balance. The world sank into nausea.”

Evocative, intelligent and haunting, crime and thriller fans will love Sixteen Horses. For those who loved The Dry and Scrublands. The genre skews towards gothic, and readership skews 20+