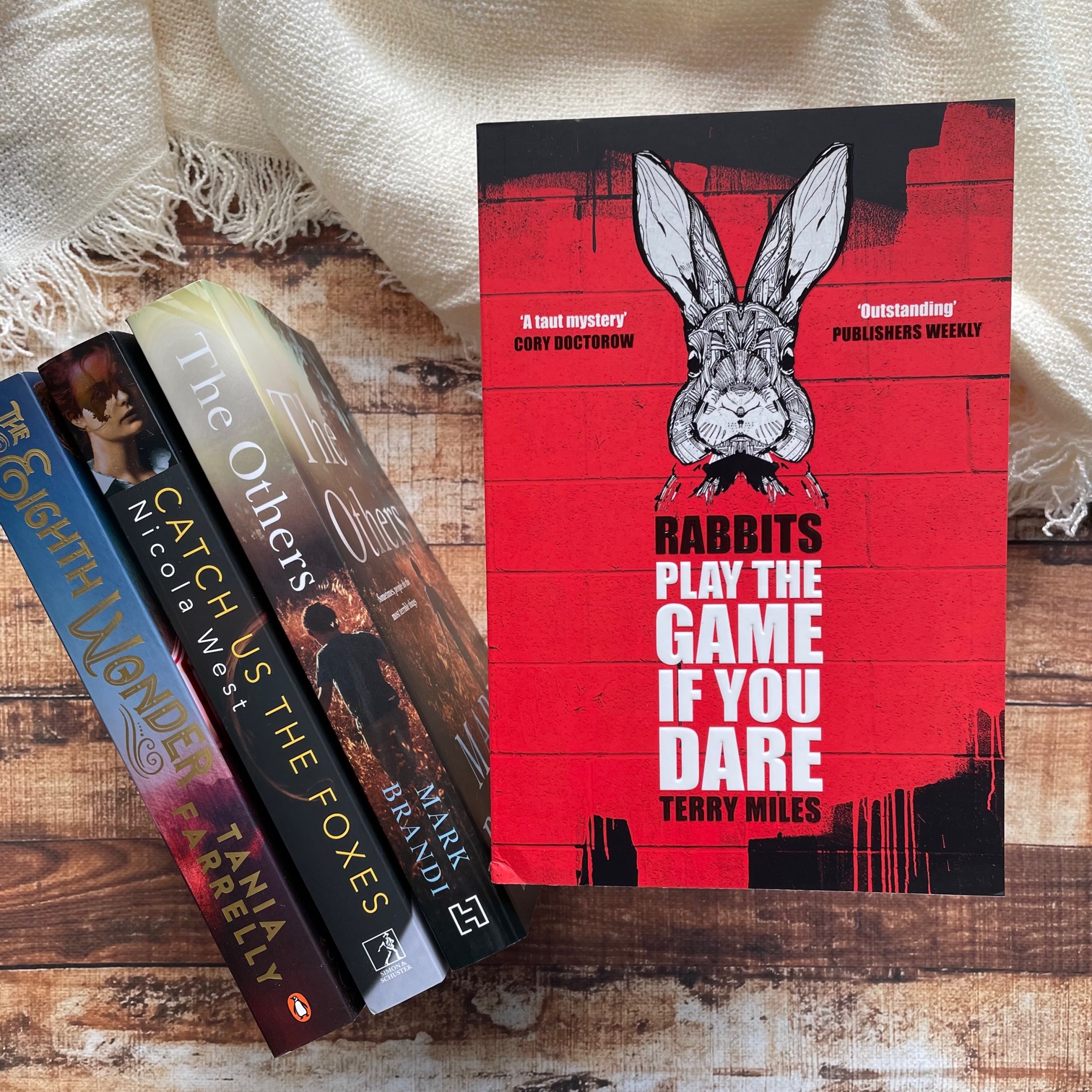 Rabbits is a secret, dangerous and sometimes fatal underground game. The rewards for winning are unclear, but there are rumours of money, CIA recruitment or even immortality. Or it might unlock the universe’s greatest secrets. But everyone knows that the deeper you get, the more deadly the game becomes – and the body count is rising. Since the game first started, ten iterations have taken place . . . and the eleventh round is about to begin.

K can’t get enough of the game and has been trying to find a way in for years. Then Alan Scarpio, reclusive billionaire and alleged Rabbits winner, shows up out of nowhere. And he charges K with a desperate mission. Something has gone badly wrong with the game and K needs to fix it – before Eleven starts – or the world will pay the price.

Five days later, Scarpio is declared missing. Two weeks after that Eleven begins, so K blows the deadline. And suddenly, the fate of the entire universe is at stake.

Terry Miles’ debut technothriller Rabbits is centred around an underground global game that is played largely in secret, but with dangerous consequences. The novel will appeal to reluctant male readers, particularly teenagers. It’s a high-stakes, high-tension story that progresses at breakneck speed.

If you dare play the game, you best keep it to yourself. Follow the clues, find the coincidences, and if you win the game you could acquire all that you desire — wealth, possessions and more. Written in first person POV from K’s perspective, we come to understand just how deep his obsession with Rabbits runs. His first interaction with the game resulted in the death of a childhood friend, and it almost killed him as well. When his parents die soon after, he processes his grief by burying his attention in the game.

“In 2016, we’d begun hearing rumours that the ninth iteration of the game had finally started, and I immediately became so obsessed with playing that I ignored every other aspect of my life and almost stopped sleeping completely.”

Terry’s writing is stripped back, allowing the dialogue and action to take focus for the story. Whilst this can sometimes feel a little dry and monotonous, I think it works for a novel like this. It’s all about the game — the progression. And whilst K seems like an unreliable narrator because of his obsession with the game, his uncontrollable blackouts and his memory lapses, it all adds to the intrigue surrounding the game.

Set in the United States, events progress in a linear fashion, and the entire novel actually takes place across a relatively short period of time. What readers will love most is K’s experience hunting clues alongside his girlfriend Chloe. It felt a bit like a treasure hunt, something that all readers will enjoy. If your partner or son or family member is a bit of a ‘sometimes’ reader and it’s hard to find books they’ll really love, this is something I’d recommend purchasing. It’s certainly a story I can envision on the big screen.

“I wondered why we couldn’t see this thing from Earth. How had we never discovered it? I tried to see the bottom, to figure out its geographic location, but I wasn’t able to see enough of the Earth’s surface to place the tower among the familiar shapes of the continents.”

Admittedly, the clues seem a little coincidental at times. And while the novel starts strong and maintains pace and tension, the final hundred pages speed up so much that I felt overwhelmed by the plot and not completely sure what happened. I’m still not sure if I completely understand how we got to the ending — it’s certainly a twisty and mind-bending resolution. And I think that’s intentional?

Readers will likely find themselves just going along for the ride. If you delve too much into the events of the storyline, and the plausibility of the events, you’ll just be left scratching your head. Because to be honest, after 400 pages, I’m not even sure how the game works? How does it start? How do you even know if you’re winning?

“I’d always imagined I was connected to the world of Rabbits somehow, but it was an ephemeral feeling, fleeting, always just out of reach. And yet something felt different his time — something that might finally justify the hours spent online searching for clues to a game that at times over the years I wasn’t sure actually existed.”

Complex but satisfying, Rabbits is recommended for fans of Ready Player One. Readership skews male 16+. Readers will love the pop culture references.

Side note – apparently this novel is based on a podcast by Terry Miles, which I had no prior knowledge of but I was still able to experience and follow the novel. So don’t feel discouraged if you’re not familiar with the podcast.