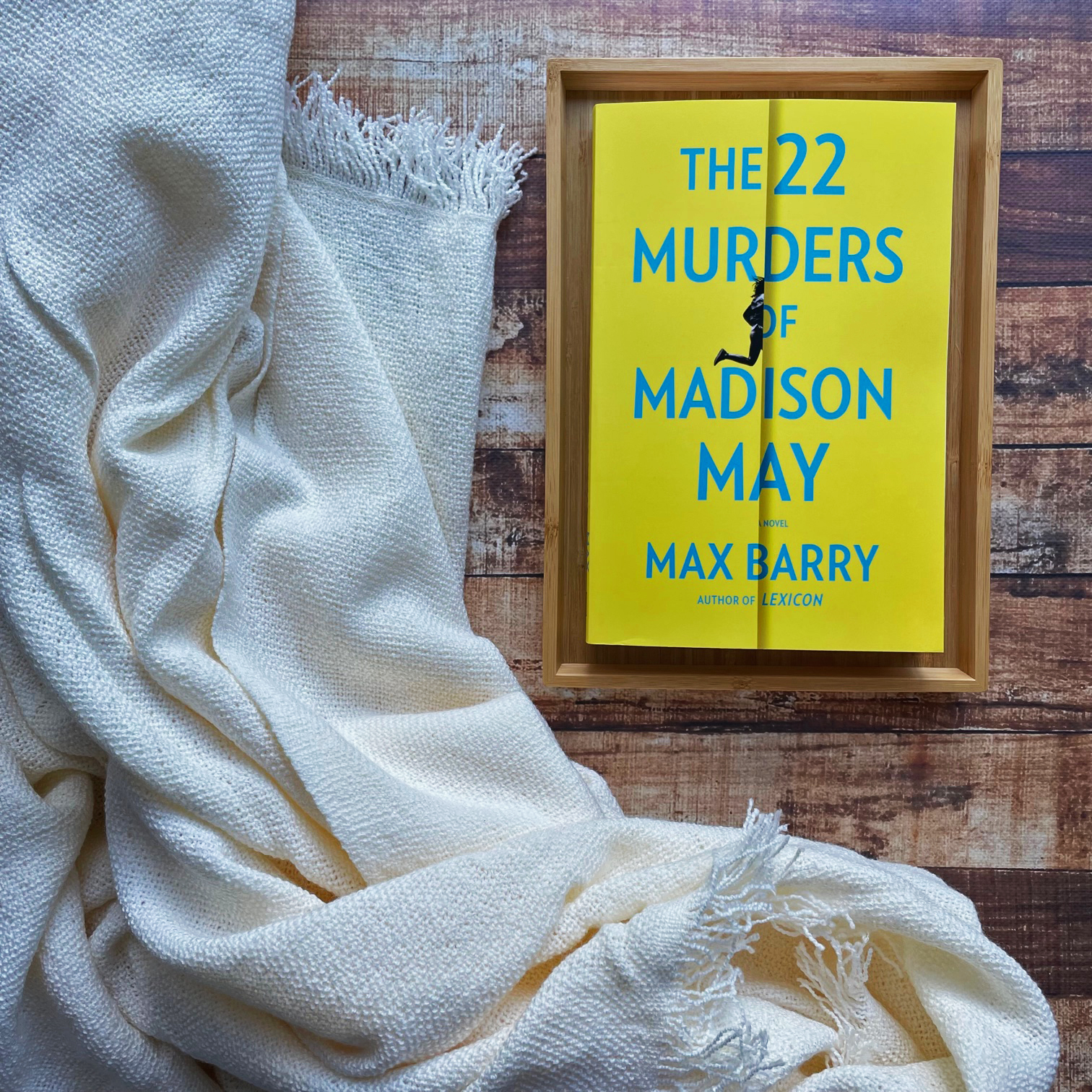 ‘If at first you don’t succeed, try, try again.’

In Queens, New York, 22-year-old real estate agent Madison May is showing a house. The buyer, a man she’s never met, is friendly, engaging . . . and claims to be her soulmate from a parallel life. She’s in danger, he tells her. He’s come to save her.

Later that day, newspaper journalist Felicity Staples is assigned to report on Madison May’s murder. Discontent with her own life, Felicity finds herself drawn into a shocking conspiracy involving a powerful group who have harnessed the ability to slip between lives – to move between one version of reality to another.

On the run, turned into an imposter in her own life, Felicity is forced to seek the truth behind Madison May, the woman who is murdered over and over, in different ways, wherever she goes. For only by saving Madison May can Felicity reassemble the broken pieces of herself.

Max Barry’s The 22 Murders of Madison May is a parallel-universe thriller about a crazed psychopath and his incessant, unexplained need to travel between different worlds to kill the same girl, over and over — Madison May.

We meet Madison in the opening chapter. She’s a young real estate agent showing a new listing to a potential buyer. Before long, he’s professing his love for her. And then he’s stabbing her to death. When reporter Felicity Staples is assigned the story, she’s suddenly thrust into an inter-dimensional saga that has her leaping through time in an effort to save Madison May.

“She sprawled on the tracks, banging her chin and elbow and knee. Her bag hit the ground and vomited forth her belongings. She raised her head quickly, because there was a train approaching, she recalled, a train, its lights blooming, and as she did, the air split with a bone-rattling blast from its horn.”

Barry’s novel is very good — so good I ripped through the story in one day. This is the very definition of a cat-and-mouse chase.

The world-building is complex enough to be interesting and draw the reader in, but not so complicated that it’s hard for readers to follow. Everything about this novel is comprehensible and easy to follow.

In each new world, Felicity’s life is very similar, with a few exceptions. Perhaps her boyfriend suddenly knows how to cook, or one of her cats doesn’t exist. Her job is the same, and her apartment as well, but her furniture might be different. And in every new world, Madison May has the same aspirations and the same friends, but her life is in a different place. She’s a real estate agent or a waitress, or perhaps she’s trying to make it as an actress.

Once we’ve moved on from one world, we never go back again, so the story is always progressing in a forward motion and there’s always something new to discover when we meet Madison May again and again and again. The poor girl just keeps getting murdered, and yet Felicity is determined to save her, even though she knows that when she moves into another world, she’ll never be able to go back to her old life. She’s moving further and further away from her own reality.

Experimenting with notions of the space-time continuum, The 22 Murders of Madison May is certainly something I could see playing out on the big screen.

“She didn’t want to give up the egg. It was practically the only thing she had: the only thing that had come with her aside from the clothes she’d been wearing. But she couldn’t hide it for much longer. Eventually, they would find it.”

There’s a small cast of characters, which allows Barry to capture each with depth and believability. Each new world is an alternate construction of Madison May, and how she intersects with Felicity, Clay and Hugo. Occasionally, secondary characters make an appearance.

I’ll admit, there didn’t seem to be as much introspection for Felicity as I would’ve expected. She doesn’t seem particularly stricken to discover she can never go back to her old life, and she seems to cast aside her job rather quickly — so quickly I forgot her job existed at all. Her character development is about embracing the life you’re given and not dwelling on what’s lost, but still, I expected a bit more reflection from her character. Psychologically, shouldn’t she be more affected by what she’s facing?

“She didn’t dare turn. But she saw his eyes shift. The hand holding the knife moved lower, hovering between the front seats like the fang of a snake. He would let the car pass, she saw. If she moved, he would stab her, but his plan was to kill her after it had gone.”

Chilling and clever, and progressing at breakneck speed, The 22 Murders of Madison May is a joy to devour. For fans of crime, thriller and mystery novels. Readership skews 20+