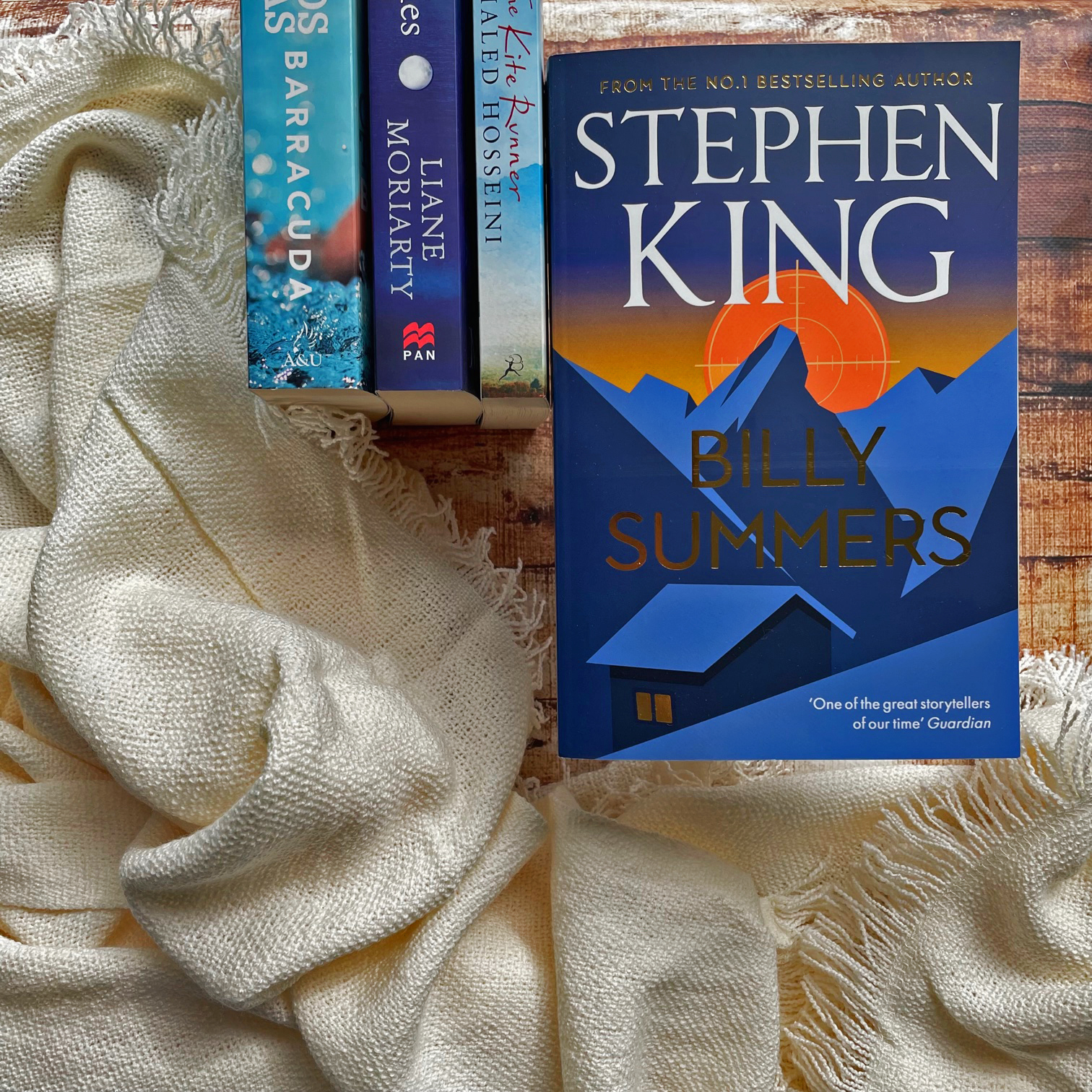 Billy Summers is a man in a room with a gun. He’s a killer for hire and the best in the business. But he’ll do the job only if the target is a truly bad guy. And now Billy wants out. But first there is one last hit. Billy is among the best snipers in the world, a decorated Iraq war vet, a Houdini when it comes to vanishing after the job is done. So what could possibly go wrong?

This spectacular can’t-put-it-down novel is part war story, part love letter to small town America and the people who live there, and it features one of the most compelling and surprising duos in King fiction, who set out to avenge the crimes of an extraordinarily evil man. It’s about love, luck, fate, and a complex hero with one last shot at redemption.

You won’t put this story down, and you won’t forget Billy.

When Billy is offered an extraordinary amount of money to kill a convicted killer, he bunkers down in an office building for months under a new identity — he’s pretending to be a man writing a novel, so people won’t suspect him of foul play and he’ll have optimal range when it comes time to make the shot.

But there’s something about this one last job that feels uncomfortable. The escape plan seems foolproof, but Billy has an inkling he’s being played. And soon after he kills his target, it’s about more than just survival. This is where the novel really picks up.

“Hoff smiles. Probably it’s charming when he’s on his game but he’s not on it now. He’s in a room with a paid killer. That’s part of it but not all of it. This is a man who feels the walls closing in, and Billy doesn’t think it’s because Hoff suspects he might be played for a patsy. He should know but he doesn’t.”

Billy Summers is a little slow for the first third, but once Billy completes the kill he was hired for, the pacing quickens, the stakes heighten, and the novel gets very good. We meet a new character, Alice — she’s wounded, broken, complex and she offers something fresh to the novel. It’s hard to talk about the rest of the novel without giving spoilers away, but the story does venture into really dark territory, particularly pertaining to Alice.

She does, however, offer some light in the novel. Together, Billy and Alice compliment each other as they work to deal with the fallout of recent events. The novel would’ve felt a bit limiting or lonely if Billy remained solo for his journey, so the introduction of another major character was no doubt a stylistic decision to keep the story moving in an interesting and inviting way, but also to allow the chance for Billy to grow and reflect as a character. Being around Alice resembles some sort of father-daughter bond, and we witness them both grow over the course of the story.

“At some point during that summer — his season of many identities — Billy re-reads the story of Bob Raines’ death and the hearing that followed. Then he goes to the window and looks out at the courthouse, where a sheriff’s car has pulled up to the curb.”

Admittedly, there are a few moments in the book that feel a little out of joint. King suggests some sort of attraction between Billy and Alice, which doesn’t feel natural — in a post-MeToo era, this element of the book does feel a little dated and inappropriate. And the scene where Billy takes Alice in after she’s been attacked, and then examines her body and describes it to the reader, didn’t feel overly necessary. Lastly, Alice seems really eager to join Billy on his endeavours, despite knowing him very little.

“He thinks briefly of deleting everything he’s written, it’s awful, but saves it instead. He doesn’t know what anyone else might think, but Billy thinks it’s good. And good that it’s awful, because awful is sometimes the truth.”

Recommended for readers of thriller and crime. Billy Summers is a little different to the horror and fantasy reads that fans of Stephen King will be accustomed to, but I do think his fanbase will enjoy this latest offering. Readership skews male, 25+