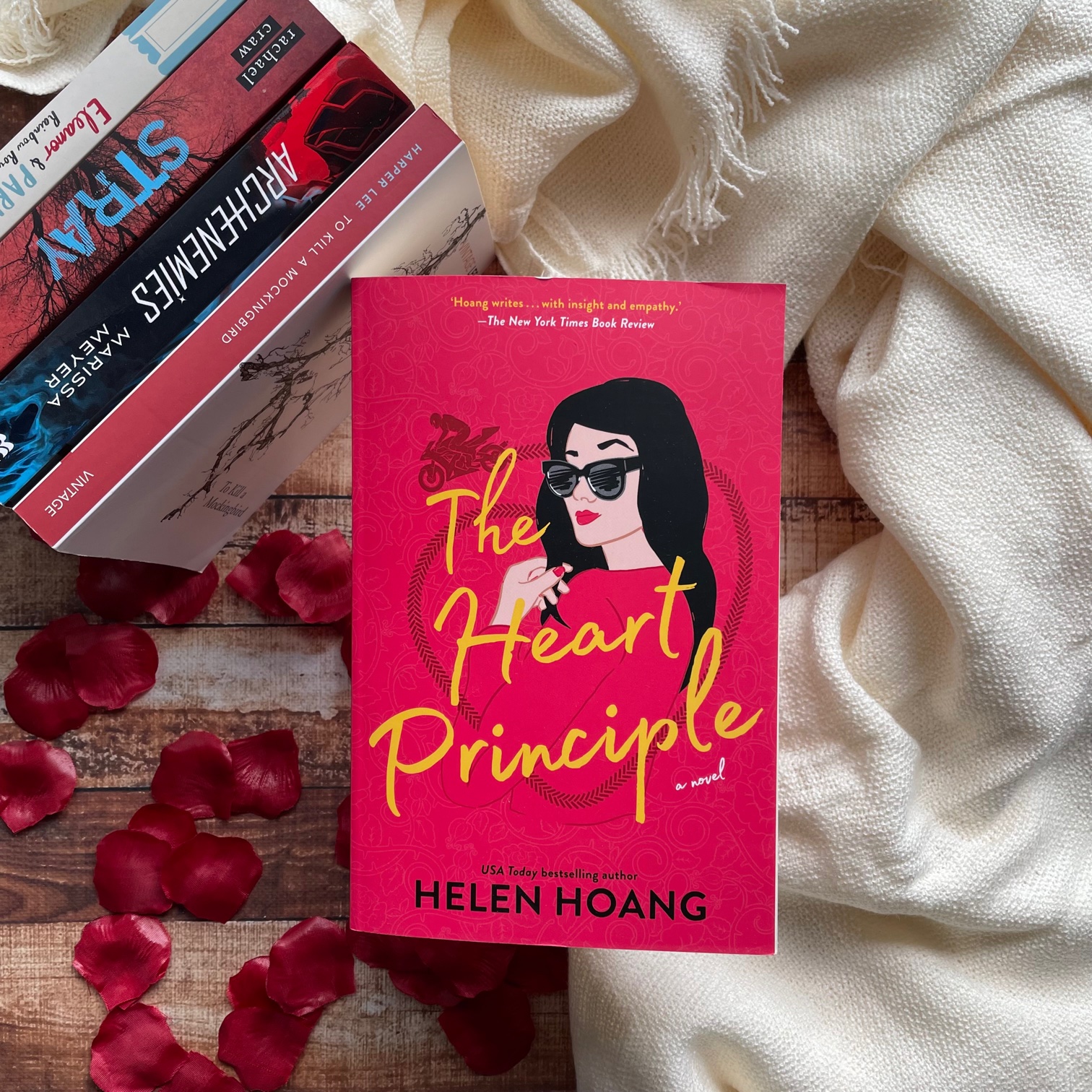 When violinist Anna Sun accidentally achieves career success with a viral YouTube video, she finds herself incapacitated and burned out from her attempts to replicate that moment. And when her long-time boyfriend announces that he wants an open relationship before making a final commitment, a hurt and angry Anna decides if he wants an open relationship, then she does, too. Translation: She’s going to embark on a string of one-night stands. The more unacceptable the men, the better.

That’s where tattooed, motorcycle-riding Quan Diep comes in. Their first attempt at a one-night stand fails, as does their second and their third, because being with Quan is more than sex-he accepts Anna on an unconditional level that she herself has just begun to understand.

Helen Hoang’s The Heart Principle is both a contemporary romance novel and commercial women’s fiction novel exploring identity, self-sacrifice and belonging. The second half of the novel painfully explores the role of family expectations and caregiving.

Protagonist and violinist Anna is struggling with her music — after experiencing viral fame, she feels her music is riddled with errors. She’s also struggling to connect with her family, and her sister’s continued disinterest and disregard for Anna’s feelings creates friction between them. Anna’s connection with Qual after an intended one night stand allows her to confront her insecurities and her hesitations (particularly relating to intimacy), and work to understand herself a little better.

“There’s a confidence and relaxed coordination in the way he moves that suggests he’s been in a few fights — and won them. Have I lost my mind that this is intensely appealing to me, that hint of danger?”

Helen’s strength lies in her narration and voice. Written in first person, Anna’s voice offers reflection at key moments. She’s wise and intelligent, and she’s considerate. Too considerate. She puts others before herself, and she doesn’t quite understand how unhappy she is — how she’s not living the life she wants.

For most of the novel, Anna battles with herself as she tries to overcome her music struggles and her family’s judgement of her. When Anna’s psychologist tells her that she’s likely autistic, it allows Anna the chance to understand who she really is, and how she can progress in her personal life and her career.

Many readers will understand that multi-faceted feeling of pressure — from family, partners, career, and society. Sometimes we are our own worst enemy, so it’s nice to feel reassured about who you are and where you are in life.

“Parts of me don’t look quite right anymore. That’s the simple truth and something that I feel I need to explain. There’s also the other thing, the thing that I haven’t told anyone yet, because it’s awkward and it sucks and sometimes it still makes me cry.”

Admittedly, the novel does a bit like a clash between priorities. Is this a romance first and foremost? The first half certainly feels like it, but the second half almost feels like a different story. I’m not saying it’s not enjoyable — I binged the book in one day — but it did feel a bit like a jolt as I made my way through the story. The progression of Anna and Quan’s romance certainly felt predictable, and the ending foreseeable.

Personally, I loved that Anna’s relationship with her sister was left unresolved at the end of the novel. It shows that not everything can be fixed or wrapped up in life, and that sometimes relationships can remain broken.

“His words catch me off guard, and I stare at him for a moment. I need to run, to escape, to crumple up tonight like a ruined sketch and start with a fresh sheet. And he’s telling me not to. Worse than that, he makes perfect sense. And he’s smiling again, taking my breath away and making me stupid.”

Heartwarming with a lot of soul and charm, The Heart Principle is recommended for fans of romance and commercial women’s fiction. I can see YA readers loving this as well. Readership skews female, 20+