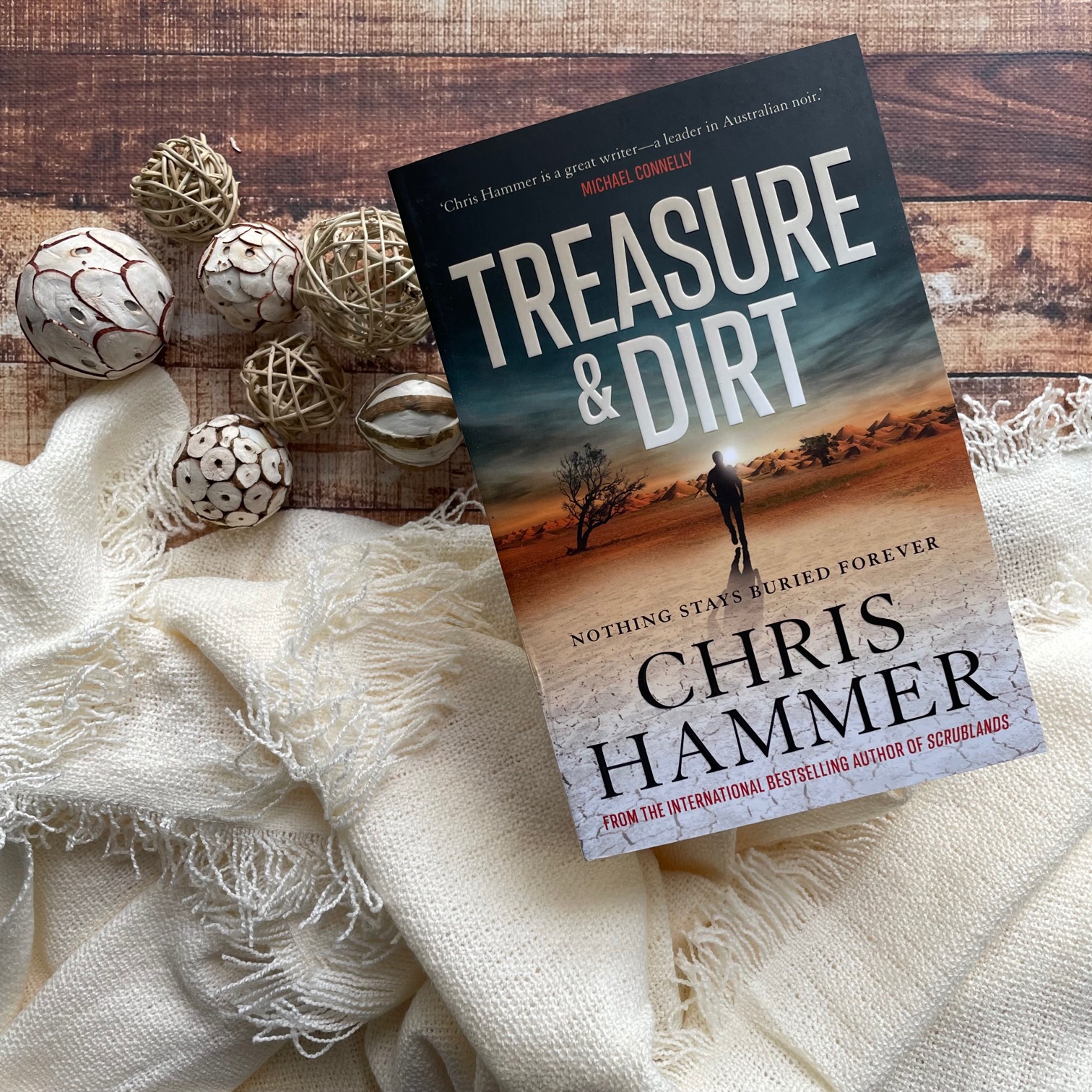 Then an opal miner is found crucified and left to rot down his mine. Nothing about the miner’s death is straightforward, not even who found the body. Sydney homicide detective Ivan Lucic is sent to investigate, assisted by inexperienced young investigator Nell Buchanan.

But Finnigans Gap has already ended one police career and damaged others, and soon both officers face damning allegations and internal investigations. Have Ivan and Nell been set up and, if so, by whom?

As time runs out, their only chance at redemption is to find the killer. But the more secrets they uncover, the more harrowing the mystery becomes, as events from years ago take on a startling new significance.

Master of crime fiction, Chris Hammer returns with his latest novel – Treasure and Dirt. Once again set in a rural, desolate Australian town, the novel centres around an unexplained murder and a town full of people desperate to keep their secrets hidden.

Because I read – and loved – Chris’ first novel Scrublands, I was of course eager to read his latest. Despite his novels being quite long and complex, it’s so easy to bury yourself in the book from cover to cover. Usually, the stories are never just about one murder, or one mystery. There’s a long history of mysterious activity in Chris’ books, and so you know you’re in for a great read.

“The motel is called The Golden View, except there is no view. Ivan is happy to ignore the lack of a vista: it’s modern and well-maintained, somehow incongruous in the jumble-sale aesthetic of the town, sitting on The Way, east from the crossroads, where the road is still sealed.”

Chris’ characters are complex, well-rounded and they always lead his novels well. You don’t want a character to be too eccentric, because crime fiction feels like it should be as much about the plot and the secondary characters as it is about the protagonists. Together, Ivan and Nell create quite an interesting dynamic as they work to solve the murder of a local opal miner found crucified deep within his mine.

Ivan is guarded but trusting, and Nell feels like she has to prove herself amongst the other police officers. She’s accelerated quite quickly in her career, but she still has a lot to learn.

As with Chris’ other novels, setting is a strong element in Treasure and Dirt. You can feel the humidity and the dry, scorched landscape – you can almost feel the taste of thirst on your tongue, and the desire for air conditioner in hot cars.

“The police station is deserted when they pull up outside. No other cars, just them. Beside him, Nell leaves the engine running, not even asking: the air conditioner is essential. It’s past five, but there’s no sign of the day cooling. Here, in the hollow of the town, the sun will soon dip behind the West Ridge, promising some relief.”

I’ll admit, the intimate discussions towards the end of the novel around the stock market and fraud went over my head. And I wouldn’t say mining is a huge interest of mine. But regardless, Chris pulls together an incredibly compelling set of events to engage even the most reluctant of readers.

Some might argue there’s too much going on in the novel, but I think that’s a trademark for Chris Hammer because it’s something I recognised in Scrublands. The heightened complexity of his stories allows for a high-pressure, high stakes suite of novels. The multi-layered nature of his work means you’ll always feel unprepared for what’s next, which is a gift in crime fiction.

“Nell looks at Ivan’s face, sees the concentration there, stark in the torchlight. She wonders what he might be thinking, what significance he’s reading into the link between the mines. But she finds herself unable to ask, to break his train of thought. There is something solitary about him, something that forbids intrusion.”