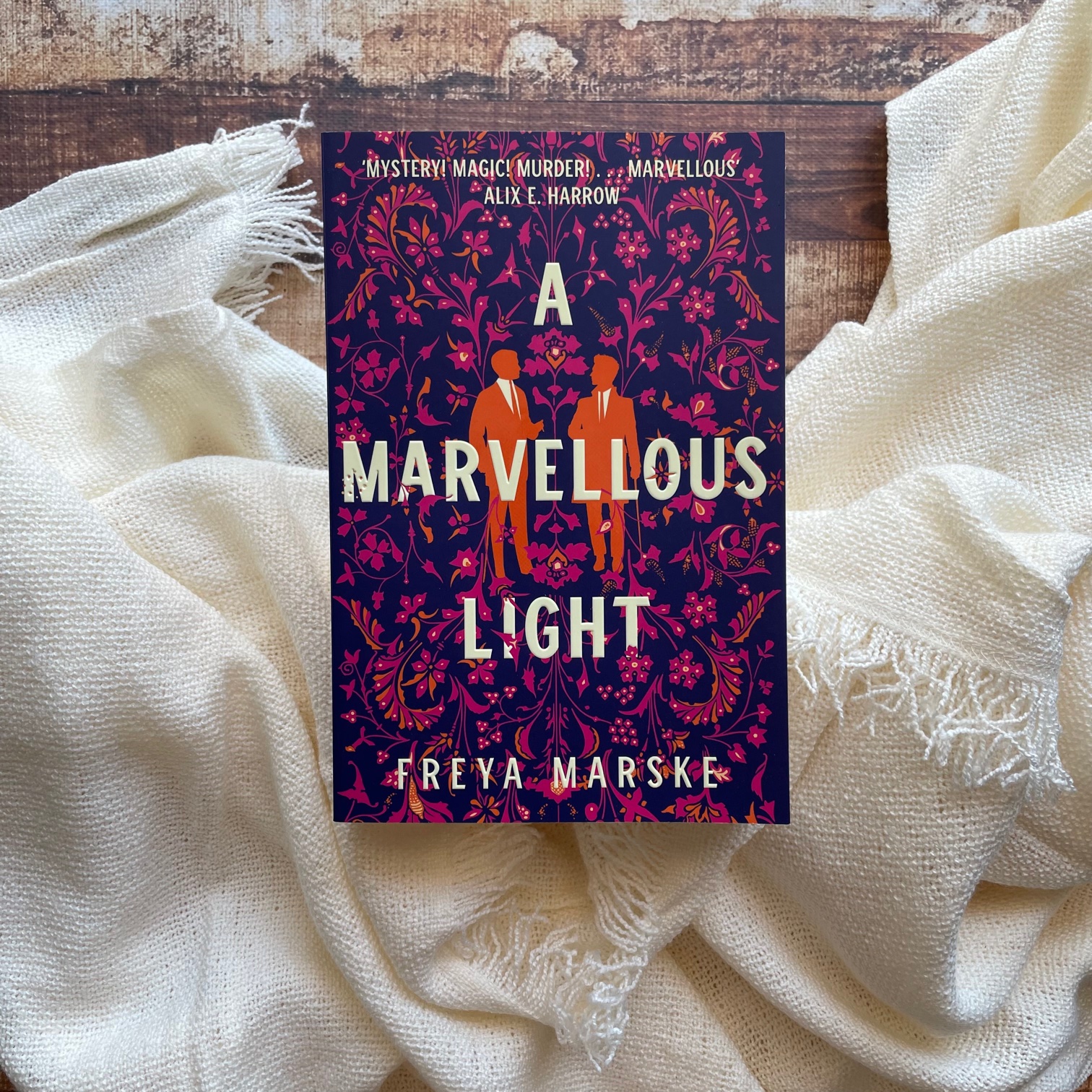 Young baronet Robin Blyth thought he was taking up a minor governmental post. However, he’s actually been appointed parliamentary liaison to a secret magical society. If it weren’t for this administrative error, he’d never have discovered the incredible magic underlying his world.

Cursed by mysterious attackers and plagued by visions, Robin becomes determined to drag answers from his missing predecessor – but he’ll need the help of Edwin Courcey, his hostile magical-society counterpart. Unwillingly thrown together, Robin and Edwin will discover a plot that threatens every magician in the British Isles.

Freya Marske’s debut novel A Marvellous Light is both fantasy and queer romance, set in early 1900s Edwardian England. The confident — but slightly clueless — Robin Blyth finds himself thrust into the hidden world of magic and the victim of a curse he can’t control.

Readers will enjoy the premise of the novel, the integration of magical realism throughout the story, and the leading characters Robin and Edwin. Both these men are grappling with the situation before them — Robin, determined but ultimately in over his head, and Edwin, unfortunately plagued with meagre magic and constantly tormented by his siblings.

“Robin’s second impression was that Lord Hawthorn had also been visited by disruptive thieves during the night, because the room into which they were led was a morass of belongings strewn over every surface.”

Family dynamics is a strong element in this story — how Robin and Edwin both interact with family amidst society. I can’t quite explain it, but this book feels suited to seasoned readers — those who know exactly what they’re looking for in a novel. Those who love genre fiction and romance, and unsuspecting characters thrust into an alternate world that they’re ill-prepared for. Personally, I found the opening of the novel quite slow and impenetrable, but admittedly it got better as it went on.

When Robin is attacked by thugs and finds himself cursed, he must work together with Edwin to end the curse and find the object these thugs are so desperate to uncover. Stylistically, Freya writes in third person but moves back and forth between Robin and Edwin’s POV. Freya’s writing is sharp and succinct — her description allows for emotional and depth, without being fluffy or over-the-top.

“Edwin settled himself back against the leather of the seat. It was real. The rattle of the window in its frame was real. Robert Blyth was not exactly imaginary — no, he was too solid, too broad-shouldered, his voice too loud and too warm: the voice of someone who’d never had cause to make himself smaller.”

Admittedly, I felt that the blend of magical realism and romance was not seamlessly executed. Moments of romantic tension seemed so far removed from the plot lines that the core mystery of the novel seemed forgotten. There’s a sequence of sex scenes in the middle of the novel that didn’t feel easily embedded — the rest of the novel centres entirely around the mystery element that I felt quite surprised to find sex scenes in the novel at all. Whilst they were sensual, and I’m sure they’ll be appreciated by some readers, I’m not sure they fit easily into this book where they are.

“Excitement crawled over Robin’s scalp. He didn’t think Courcey actually meant him any harm; the man was far too prickly. If he’d been trying for charm Robin might have been worried.”