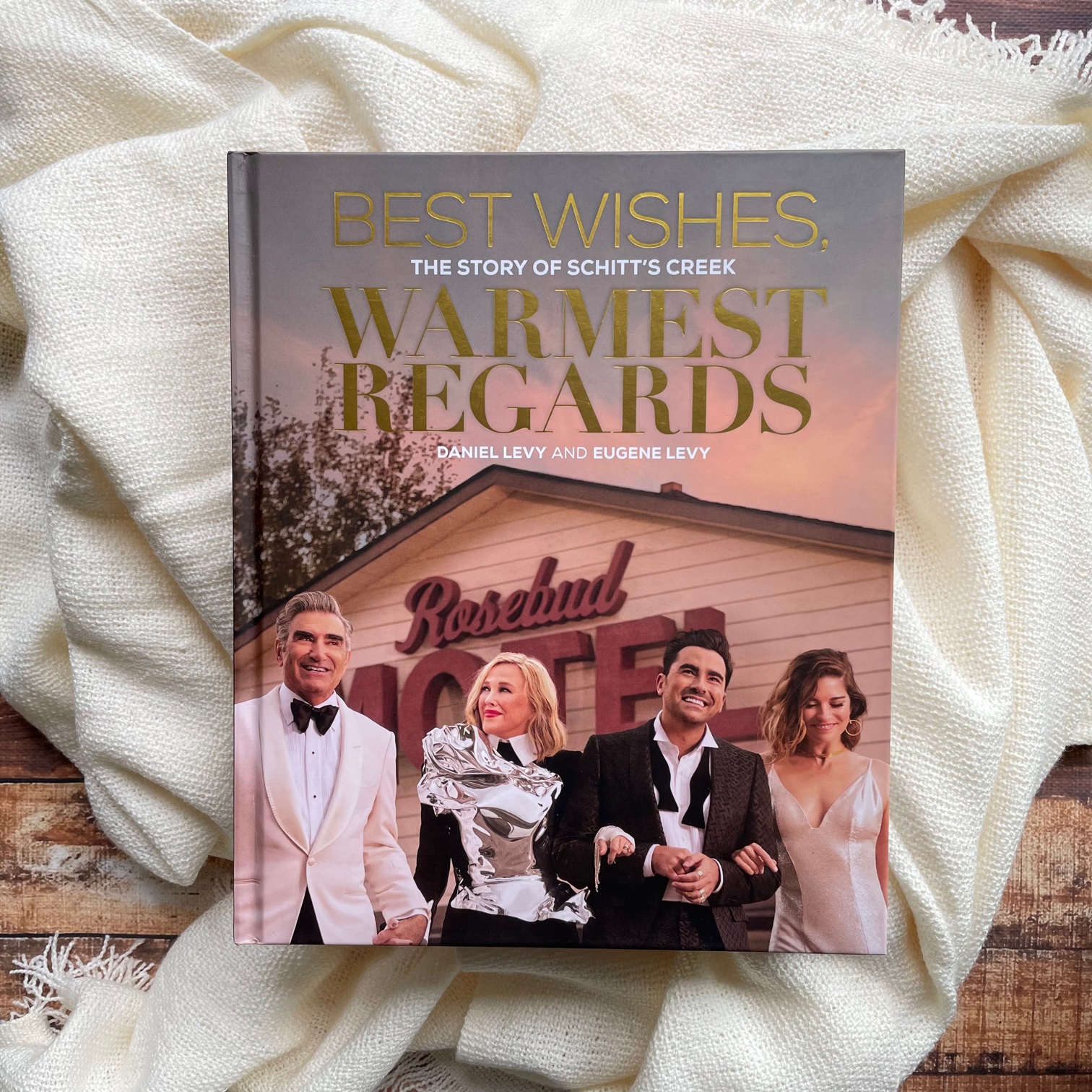 This beautifully produced, lavishly illustrated book is the ultimate celebration of the series, the town, the characters, and the state of mind that is Schitt’s Creek. Capturing the essence and alchemy of all six seasons of what is now considered to be one of the most ground-breaking comedy television series of the last decade, Best Wishes, Warmest Regards is a gift to fans everywhere who have made the show their own.

Best Wishes, Warmest Regards is something I’ve been excited to read for months. I’m a huge fan of the TV show, recommending it to everyone and anyone, and I love the idea of learning more about the creative development of this series. This is a striking and colourful compendium for anyone who has grown to love the show in recent years.

Schitt’s Creek provided people with a lot of solace over the last couple of years – a welcome, funny, creative show that guaranteed laughs. I was so excited to read this new coffee table book chronicling the journey of the show’s creation, from conception all the way through to the sixth season finale. It’s a classy collection of the best aspects of the show, with insightful commentary inside.

“Working on our presentation pilot showed me just how strongly he was coming into his own as a writer, particularly a writer who had his finger on the pulse of his own generation. His work on camera showed me in the most vivid way just how entrenched he was, as an actor, in his own character of David Rose.”

Daniel and Eugene reflect on the conception of the show, and its characters. Various actors are voiced in the book, as we discover more about their casting and their character profiles. And then, the book moves through each scene, journaling each iconic moment with reflection from relevant actors or crew members.

Example moments include Patrick and David’s relationship, Moira working on the Herb Ertlinger campaign, the Cabaret performance, and the Rose Family Christmas episode. Also included are special features, such as the complete, illustrated catalogues of David’s knits and Moira’s wigs, Moira’s vocabulary and Alexis’ adventures.

“That process started out slow – very slow. The exercise of figuring out who these characters would be was a long one, but it was also, as I came to realize, a necessary one. We would spend weeks brainstorming a single character: where did they go to school? Who were their parents? Were they happy babies? By the end of the process we knew every single thing about each character in the show.”

A stunning tribute to the show, the book features a lot of fan art and contributed designs that really elevate the book above its competitors. Looking at all of David’s sweaters and all of Moira’s wigs makes me want to track down the art and get them printed on a coffee mug or a shirt.

Additionally, it’s really quite touching to read about how many different creatives came together to create this show. It’s not just about the cast, or even the Levy family. It’s about the production team, the hair and make-up team, the costume designers, and the many many other people who worked tirelessly behind the scenes to help this show come to life.

Love this journey for me – is it time for another re-watch?

“When you sit down with a concept about a wealthy family moving to a small town, I think the expected scenario is that the town doesn’t know as much as this family, and the jokes would be at the expense of the town. For us it was important to not go down that path. We wanted to use this show to celebrate small towns.”

Incredibly detailed and beautifully illustrated, this is the perfect companion to the show and will please all fans. The perfect Christmas gift or stocking filler. Readership skews 20+