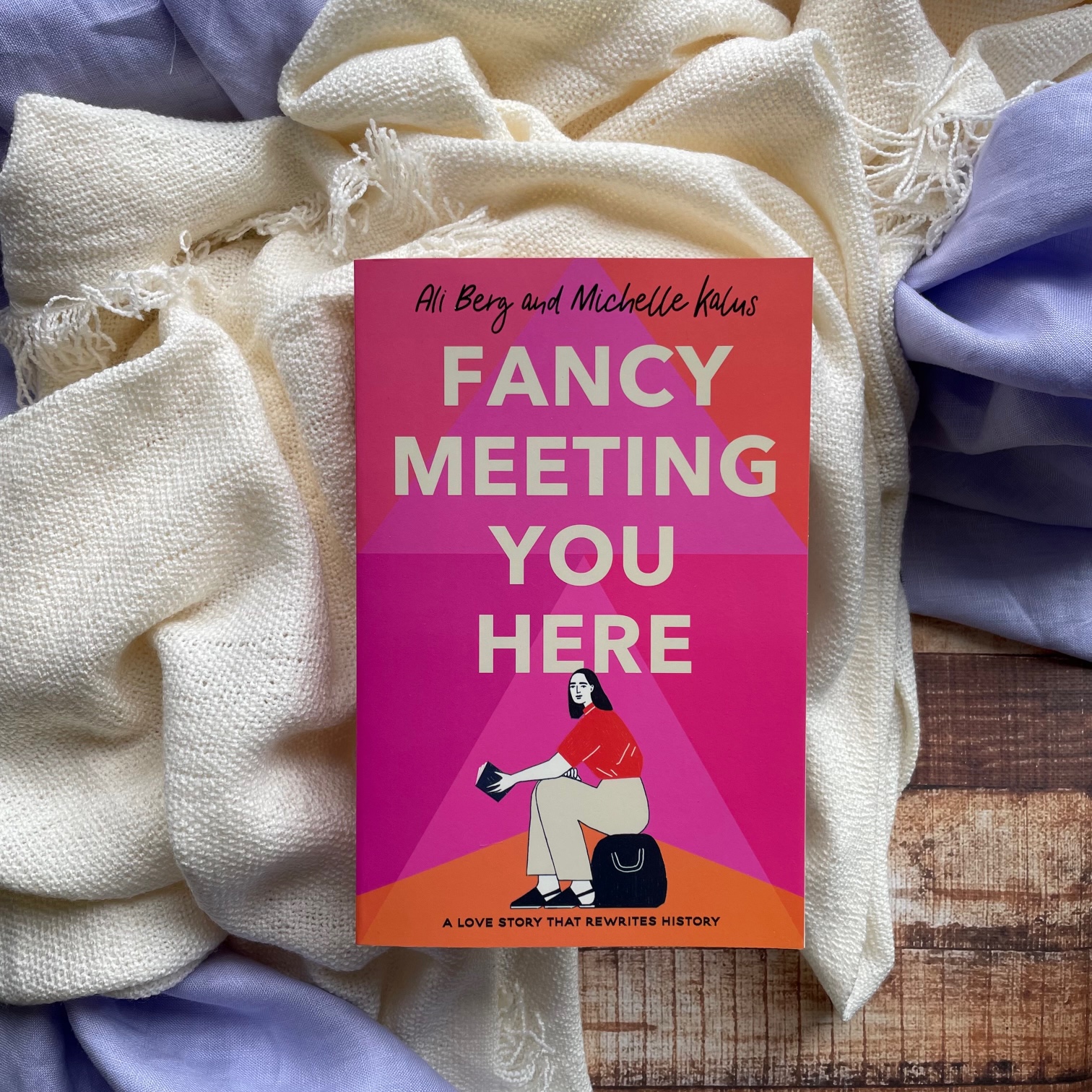 Sometimes the man of your dreams is standing right in front of you… only ten years in the past. A charming and unconventional love story about trying to rewrite history.

Evie Berry is a thirty-year-old wannabe screenwriter who spends her days managing a London cinema bar and making the podcast Pasta La Vista with her best friend Ben. She’s also obsessed with Hugo Hearst. Have you heard of him? Of course you have. He’s only one of the most influential and not to mention swoon-worthy bestselling writers of his generation.

When Evie’s not hooking up with her on-again, off-again booty call ‘Ever-Ready Freddy’ (and sometimes even when she is), she fantasises about what might have been if she’d met Hugo years ago, when he was just a struggling writer.

After Evie interviews a psychic to the stars on her podcast, her life is catapulted ten years into the past. But the grass isn’t quite as green as she remembers . . .

Romantic comedy Fancy Meeting You Here by Ali Berg and Michelle Kalus explores what it’d be like to re-live your twenties, and pursue the relationship and the life you always felt you were meant to have.

Struggling screenwriter Evie has been ‘writing’ for almost a decade, but hasn’t gotten anywhere. And she’s obsessed with the local – and incredibly famous – writer and actor Hugo Hearst. When she is unexpectedly catapulted ten years in the past, she has the opportunity to meet Hugo while he’s writing his infamous debut novel, and the two spark a connection.

“Evie felt as if she were walking on air on the way home. Apart from her excitement at actually meeting Hugo, and how well they’d seemed to get on, she also felt bolstered by what he had said about his writing process.Her obsession with getting every single word perfect was not only exhausting, but also preventing her from making any real progress.”

Charming and enjoyable, Fancy Meeting You Here is a comfort novel and one that can be devoured in a short sitting. I’m sure all of us have wondered how our lives would alter if we could go back and re-do certain years, and so there’s a universality about this book that readers can relate to. It’s also quite a quirky read — the time travel, the eccentric characters, the novel within a novel.

The premise feels unconventional and unique, so fans of this genre will enjoy the story. Despite being written in third person and solely focused on Evie’s perspective, the book feels intimate and introspective, almost as if it were written in first person. The authors capture the relationship between Evie and Hugo incredibly well — the ups and downs, the chemistry and the tension. Both Evie and Hugo possess insecurities that threaten to throw a spanner in their achievements and career trajectories, and the authors manage the delicate balance of showcasing these characteristics and crafting them to be believable and realistic without appearing over-the-top.

“When she had snuck in well after eleven o’clock, her mum and dad had been on opposite sides of the couch sipping their respective glasses of wine, the tension in the air thick with hurt and disdain.”

There are a few moments in the novel that felt overtly pointed and therefore unnecessary, for example, when Evie is back working at the cinema and feels it’s important to educate her customers and colleagues on feminism and MeToo. This felt too didactic and preachy, borderline cringe. And it was a little too coincidental that a young Freddy would appear at the cinemas while Evie is working there.

Additionally, the ending was predictable but rushed, particularly Evie’s friendship with Ben. There is not as much character development for Evie as I would’ve liked — dating Hugo feels a bit manipulative and resembling entrapment, given how obsessed she is with him and how much she knows about him in the future. I’m not sure she fully registers how unsettling her behaviour is, although I do recognise it in a lot of women’s fiction.

“Hugo looked up at Evie and her heart skipped a beat. His face was so open, his eyes serious. At that moment, he didn’t look like the swanky, celebrity Hugo Hearst. He looked like an insecure man in need of affirmation. In fact, he seemed just like her.”

Punchy and fun, Fancy Meeting You Here is recommend for readers of romance and contemporary women’s fiction. Readership skews female, 25+