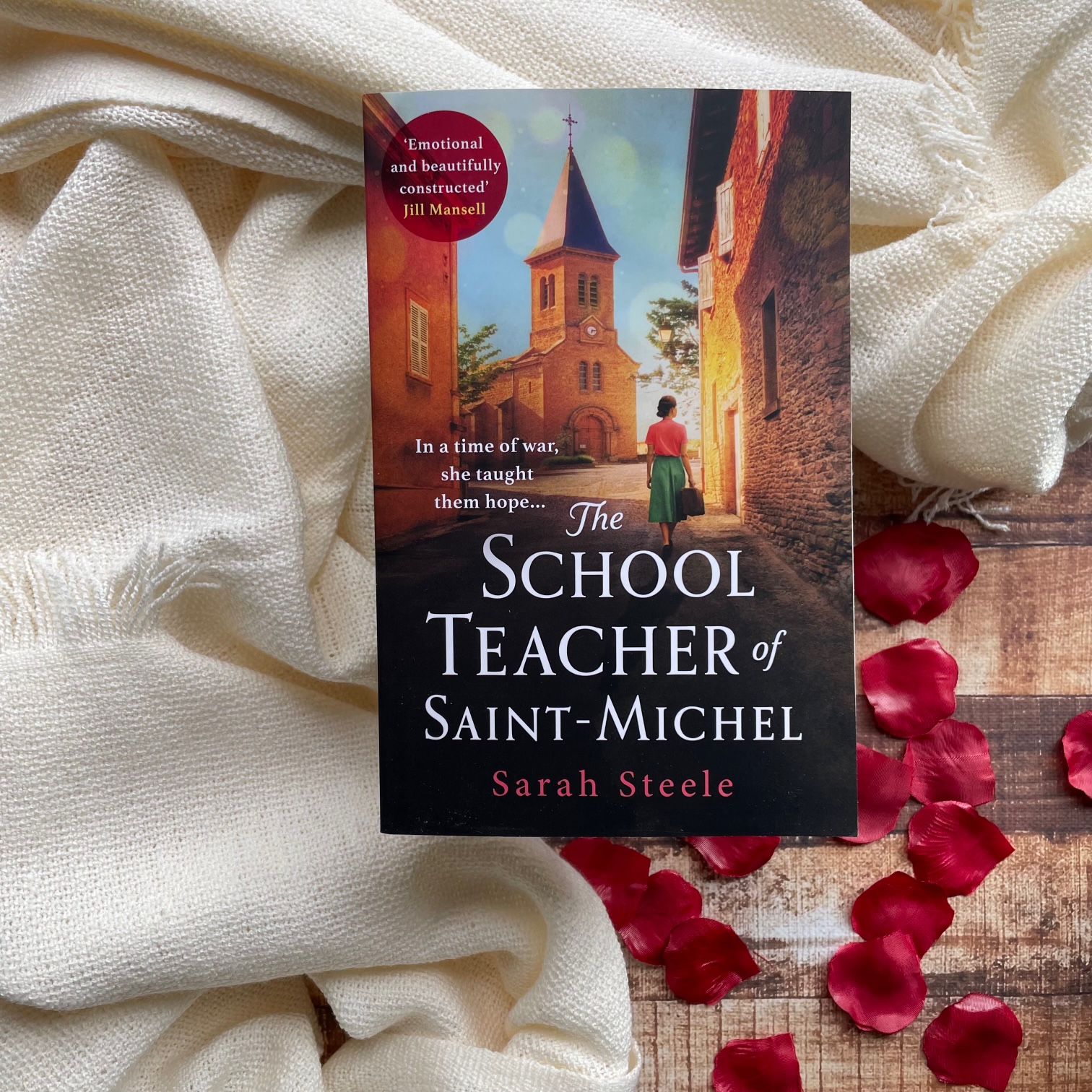 France, 1942. At the end of the day, the schoolteacher releases her pupils. She checks they have their identity passes, and warns them not to stop until the German guards have let them through the barrier that separates occupied France from Free France. As the little ones fly across the border and into their mothers’ arms, she breathes a sigh of relief. No one is safe now. Not even the children.

Berkshire, present day. A letter left to her by her beloved late grandmother Gigi takes Hannah Stone on a journey deep into the heart of the Dordogne landscape. As she begins to unravel a forgotten history of wartime bravery and sacrifice, she discovers the heartrending secret that binds her grandmother to a village schoolteacher, the remarkable Lucie Laval . . .

Sarah Steele’s The Schoolteacher of Saint-Michel is dual-timeline historical fiction. In present day, we meet the passionate but emotionally detached Hannah Stone, still grieving the loss of her grandmother and mother as she tries to take care of her ailing father. She is also still reeling from the breakdown of her relationship the year prior, something she’d prefer to forget about than confront. When she discovers a letter from her late grandmother that raises questions about her past, she heads to France to hunt down the secrets from her youth that she worked so hard to keep.

The Schoolteacher of Saint-Michel is both emotional and raw, set within a high stakes environment. At a time when a revealed secret could mean instant death, Sarah Steele paints a vivid, emotive journey for all readers.

“Why hadn’t she talked to him when she felt the dark cloud forming around her again after Lorna’s death? She had pushed him away, refused to see his help for what it was…she picked up her phone, toyed again with sending him a message. But what would she say?”

As with most historical fiction, I feel the strength lies in the storyline of the past — Gigi’s years during World War II felt like a part of history that is largely untold, so it was quite interesting to follow her portion of the novel. It was apparent how much research had gone into the novel to bring this story to life, both in factual elements and also the emotional turmoil that people would’ve suffered back then.

In the present storyline, Hannah is torn between the safety of her home and her job, and the possibility of expanding her horizons and finding new passions. She feels like she needs to take care of her ailing father, but she’s merely putting up walls to protect herself. Travelling to Europe to explore her grandmother’s story allows her to grow as a character and let others in.

The Schoolteacher of Saint-Michel allows us to glimpse into an element of our history that is largely unacknowledged. Sarah will find many devoted readers in this latest novel.

“One of the soldiers, not much older than Suzette, blocked their way, and Lucie felt Nicole’s tiny fingers tightening in her grip and the held breaths of the children behind her. She tried not to look at the weapon strapped across the man’s back, the ugly insignia on his black labels, the scars from his teenage acne.”

The long lost relationship between Hannah and her ex-boyfriend didn’t quite feel like it fit in the story. The reasons for their breakdown seemed to receive no resolution throughout the novel, so the ending felt a little unrealistic. It felt like Sarah put their resolution in the novel to suit the genre — which usually features a romance — than allowing the story to conclude in a natural fit.

The only other element of the book I struggled with was the large cast of characters in the 1942 storyline — gradual time spent in the book didn’t ease the confusion in some scenes, trying to remember how certain characters were connected to others.

“Hannah unlatched the gate to her childhood home and looked at the house with a critical eye. Its problems ran far deeper than a runaway rose bed and an invasion of ground elder…there would come a time, she knew, when they had to accept that a high-maintenance antique full of memories was no longer suitable for a solitary widower.”