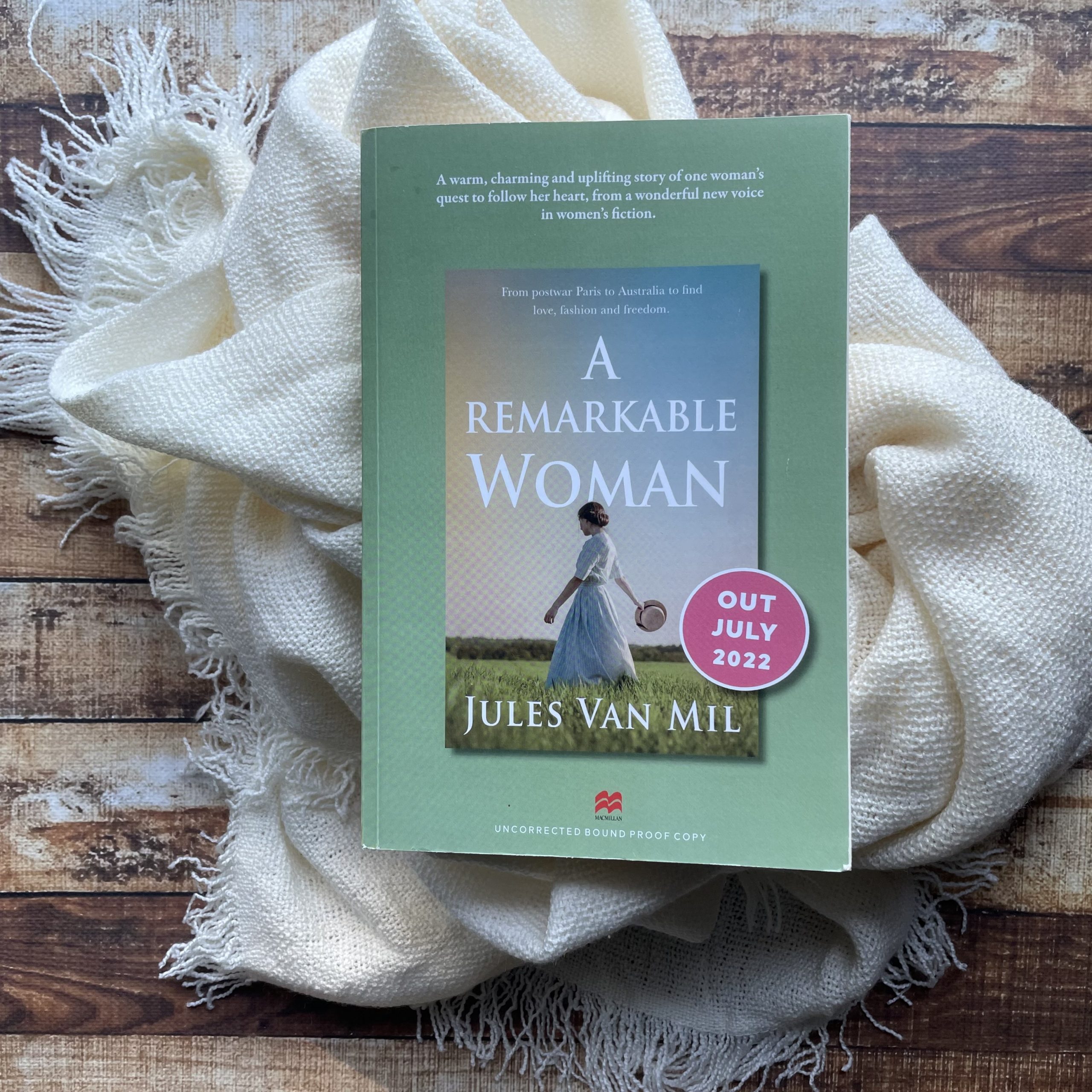 Twenty-six-year-old Frenchwoman Avril Montdidier sails from Paris to Australia with a suitcase and a dream: to start her own fashion business.

1950s Melbourne is very different from the chic atelier of Dior where Avril once worked, but she is determined, courageous and resourceful.

When personal circumstances force her to flee Melbourne, she travels to a cattle station in southern Queensland to work as a governess. It is here Avril meets Tim: the eldest son of her benefactor and heir to Monaghan Station.

Avril must grapple with her twin desires – her love for Tim, who is set to marry someone else, and her yearning for independence.

Jules Van Mil’s A Remarkable Woman is a sweeping saga set in the wake of World War II, as a young woman escapes tragedy in Paris for the cattle stations of Queensland, and eventually settles within the fashion industry of 1950s Melbourne.

A mix between commercial woman’s fiction and historical fiction, A Remarkable Woman is an uplifting tale of one woman’s perseverance amidst a suite of tragic circumstances. Set in a time when women were seen as second class to men, Avril is determined to succeed, even if it takes longer than she’d hoped. She’s determined, headstrong and a very patient woman — she knows to put her own dreams first, even if that takes sacrifice.

“At the back of the stables, Avril found Guy and they sprinted, hand in hand, down the row of poplar trees. They climbed a wooden fence next to a field of sunflowers and made their way to the grassy bank of the river. As they sat and watched the ducks swim by, they talked about the coming summer.”

Fans of historical fiction will fall in love with the setting, characters and the storyline. A Remarkable Woman traverses quite a long period of time, which is refreshing to read in this genre. Jules shows us how hard it can be for a woman in this time period to achieve their dreams, and how many side steps they must take before getting back on track. I think it’s important to have historical stories where someone’s success develops in a realistic time frame, when considering the era they’re living in.

Setting is one of the strengths of this novel, as Jules captures the chic Parisian location in the opening chapters of the book, and then the vast, open and sometimes unforgiving Australian landscape for the rest of the story. Other strengths in the novel are characterisation, dialogue, pacing and the dynamic between Avril and those she is closest to.

“It had been less than a week but Avril had missed the banter they shared on the ship, as well as their more serious discussions about the careers they hoped to have. They had seen how war had destroyed opportunities for young people in their homeland, and had vowed to make the most of their new lives.”

As a big fan of historical fiction, I adored Avril’s story and her journey throughout the book. I loved that the relationship wasn’t the forefront of the story, and that ultimately, this is a story about a woman following her passions and her dreams to carve a career for herself. She doesn’t let doubts consume her, and she doesn’t let heartache — which she frequently experiences — delay her success. Ultimately, Avril is an independent woman who doesn’t want to have to rely on anyone to solidify her position in society.

“At the station, the last whistle for her train was blowing as Avril raced along the platform and wrenched open the door of the first-class carriage, scrambling in. A porter appeared and motioned for her ticket.”

Charming, wholesome and recommended for readers of historical fiction, romance and women’s fiction, A Remarkable Woman will sweep up readers and keep them engaged until the very end. Readership skews female, 30+