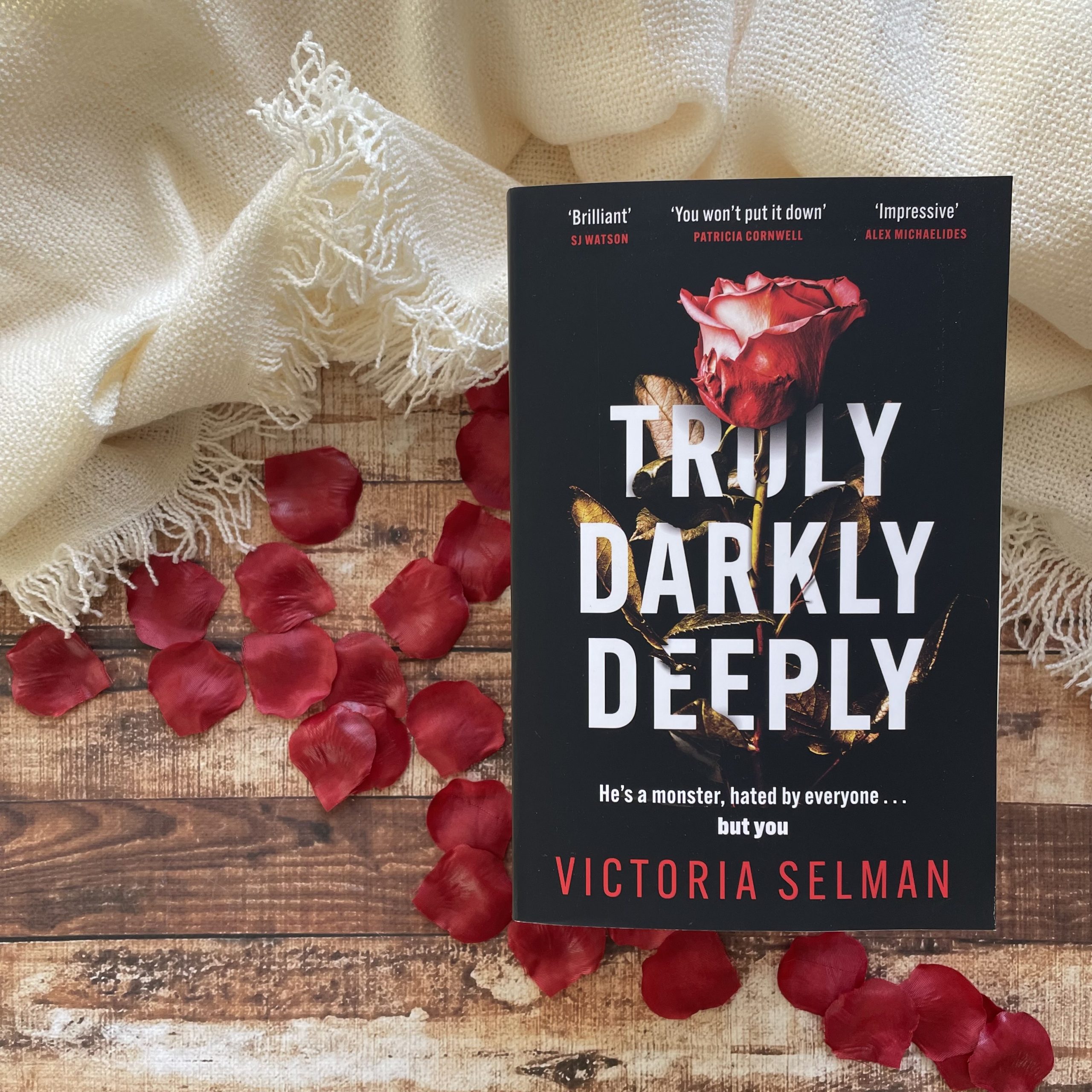 Twelve-year-old Sophie and her mother, Amelia-Rose, move to London from Massachusetts where they meet the charismatic Matty Melgren, who quickly becomes an intrinsic part of their lives. But as the relationship between the two adults fractures, a serial killer begins targeting young women with a striking resemblance to Amelia-Rose.

When Matty is eventually sent down for multiple murder, questions remain as to his guilt — questions which ultimately destroy both women. Nearly twenty years later, Sophie receives a letter from Battlemouth Prison informing her Matty is dying and wants to meet. It looks like Sophie might finally get the answers she craves. But will the truth set her free — or bury her deeper?

Victoria Selman’s Truly Darkly Deeply is a psychological thriller about a man convicted of multiple murders, and how the revelation ripples through his family – even twenty years later, as he reaches out to the family on his death bed.

The book regularly switches perspectives between present-day Sophie and a 12-year-old Sophie who is retelling the story of how Matty entered and then later left their lives. For the most part, she refuses to believe a negative word against Matty – he’s the father she never had. But even a 12-year-old has to acknowledge at some point that something doesn’t quite add up with Matty. He’s mysterious, vacant, and disappears for long stretches of time. He seems to always be available, but at the same time seems to be absent during key moments. Selman navigates Sophie’s naivety and innocence rather well in these flashback scenes.

“I knew all about Diana’s dress. I’d been keeping a wedding scrapbook of magazine cut-outs, every detail about the big day stuck in, from how many bridesmaids the soon-to-be princess was having, to the number of beads on her ivory satin shoes. I don’t remember why Matty didn’t watch the ceremony with us.”

Truly Darkly Deeply presents an interesting perspective, focusing on the family members left behind in the wake of a shocking revelation such as murder. Would you recognise if someone in your family was a serial killer? The premise is quite the hook to bring readers in and it actually reminded me a bit of Dirty John.

The pacing and the tension build are two of the strengths in the novel – Sophie’s present-day visit to see Matty does well to anchor the story, and across the course of the book you find yourself really desperate to get to that moment and find out what Matty has to say.

Additionally, I liked that there are a small number of the characters in the book, keeping the atmosphere quite claustrophobic and contained. It means there’s plenty of time in the book dedicated to understanding the dynamic between Sophie and her mother, and then Sophie and Matty.

“I wasn’t keen on spending any more time with the girl than was strictly necessary, but I’d been taught never to turn down an apology. So I thanked her and accepted her invitation graciously.”

There were a few elements of the novel that I felt could’ve been tightened – it wasn’t always clear when we were in the past or the present, so it would’ve been helpful and would’ve saved a lot of confusion if each chapter perhaps had the year dated underneath it, or even said PAST or PRESENT.

A lot of the novel is tied to this idea that Matty might not have actually been the killer, but it seems pretty clear from the beginning of the novel and so the concept of ‘is he guilty’ doesn’t really hold the value it’s intended to. And finally, Sophie’s character progression hits a bit of a snag for me towards the end. For most of the novel, she is completely against the idea that Matty could be a bad person – she is so happy he’s in her life that it’s understandably clouding her judgement. However, when she does change her mind on this, it’s too quick a decision and the thought process behind it doesn’t seem present. Suddenly, she’s changed her mind and she’s trying to convince her mother he’s a bad guy. It’s rather jarring for the reader.

“By the time we listened to his answerphone message, something in my mother had disappeared too. The despair that had plagued those first weeks of his absence had gradually eased and in its place came a sort of acceptance.”

Despite its flaws, this is a rather gripping novel and I did find myself reading it in two sittings. The premise is intriguing and compelling and regardless of its holes, readers will enjoy the journey. Recommended for readers of psychological thrillers – great for book club reads, as I think the twist at the end of the book would spark much debate. Readership skews 25+