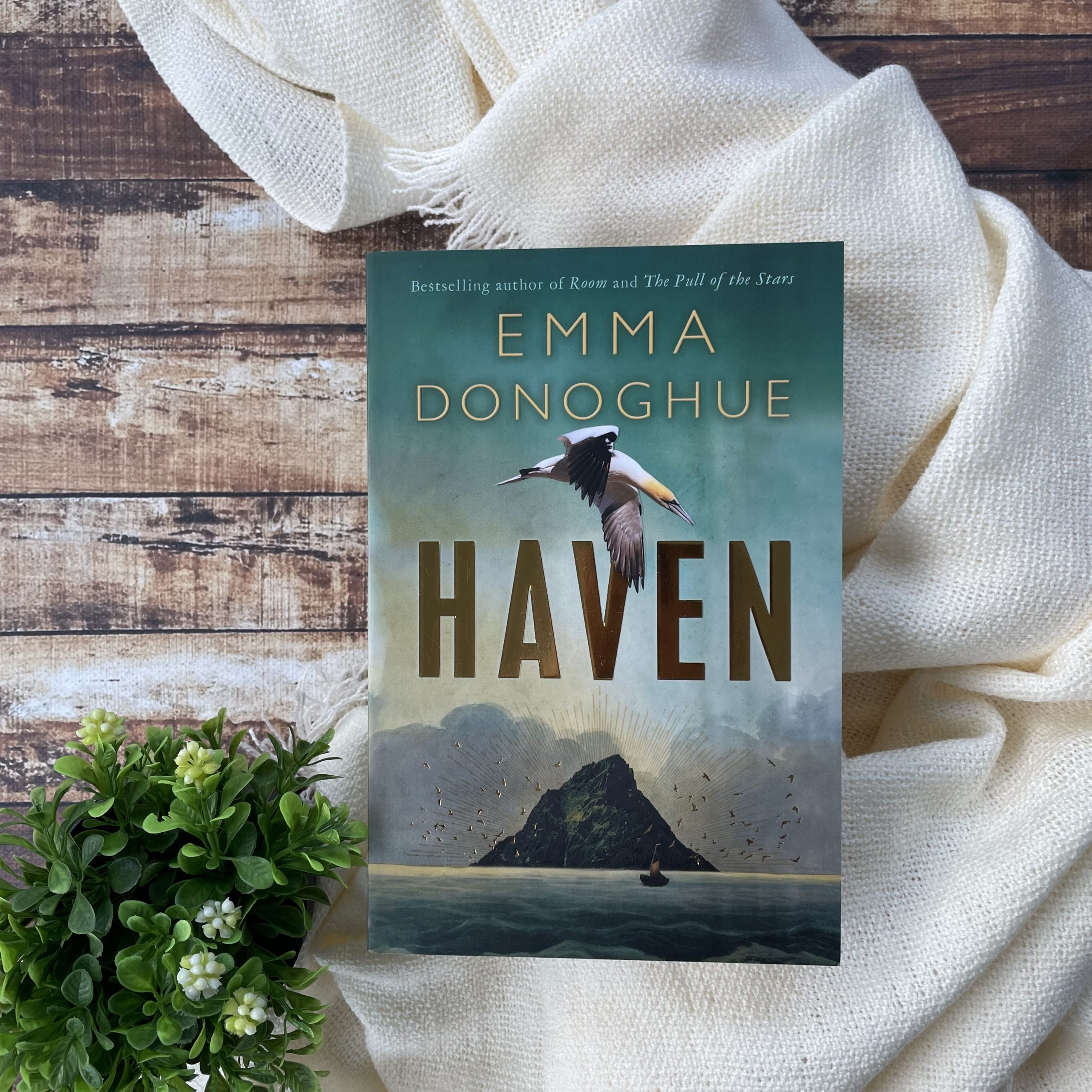 Three men vow to leave the world behind them. They set out in a small boat for an island their leader has seen in a dream, with only faith to guide them. What they find is the extraordinary island now known as Skellig Michael. Haven, Emma Donoghue’s gripping and moving novel, has her trademark psychological intensity – but this story is like nothing she has ever written before.

In seventh-century Ireland, a scholar and priest called Artt has a dream telling him to leave the sinful world behind. Taking two monks – young Trian and old Cormac – he rows down the river Shannon in search of an isolated spot on which to found a monastery. Drifting out into the Atlantic, the three men find an impossibly steep, bare island, inhabited by tens of thousands of birds, and claim it for God. In such a place, what will survival mean?

Set in seventh-century Ireland, Emma Donoghue’s Haven follows a priest and two monks in search of a solitary island far from their monastery.

Brother Artt returns to the monastery after time afar and dreams of a mission from God – take two monks and journey to an island far away in the Western ocean, and build a bastion of prayer. It’s a mission of solitariness and immense devotion, and Artt’s obsession with purity and peity grows dangerous over the course of the book.

“Now that the Prior’s taken up Cormac’s oar and the boat’s speeding along, no one is in the stern to steer her. Sick or not, Cormac should at least keep an eye out for hazards – mudbanks, logs, whirlpools, rocks, or rapids.”

This book is incredibly slow – too slow. For most of the book, it’s the journey to the island, which proves dull after a while. Whilst well-written and providing astute commentary on a number of different themes, and therefore loved by critics, I can’t help but feel this book is highly inaccessible for the average reader. I almost didn’t finish it, but because it’s not a very big book – only 250 pages – I forced myself to complete.

Haven does provide stark observation and characterisation, pivoting around the three monks as the colder weather closes in and Artt’s expectations grow increasingly unrealistic. Soon, Trian and Cormac’s loyalty begins to waver. In the final pages, a secret unravels the group and tensions reach their peak.

“They’re passing close by the black slope of the nearest island, where turf-cutters are working. A woman straightens up. A man does the same, and raises a hand. Friendly? None of them seems to be raising an alarm, or running for a weapon. Trian waves back.”

Similarities between Haven and Donoghue’s Room include its limited characters and claustrophobic, secluded environment. These characters are determined to preserve their humanity and dignity amongst complete isolation and encroaching madness.

It’s clear that Donoghue has undertaken heavy amounts of research ahead of writing the novel. Donoghue captures the era and setting with ease. The island of Skellig Michael, with its barren landscape and inhospitality, is brought to life with description and vivid imagery – fans of Star Wars will recognise the unforgiving, jagged terrain.

Slow-build, resilient literary fiction, Emma Donoghue’s Haven is recommended for seasoned readers. Readers will require commitment to get to the end of this one. Readerships skews 35+