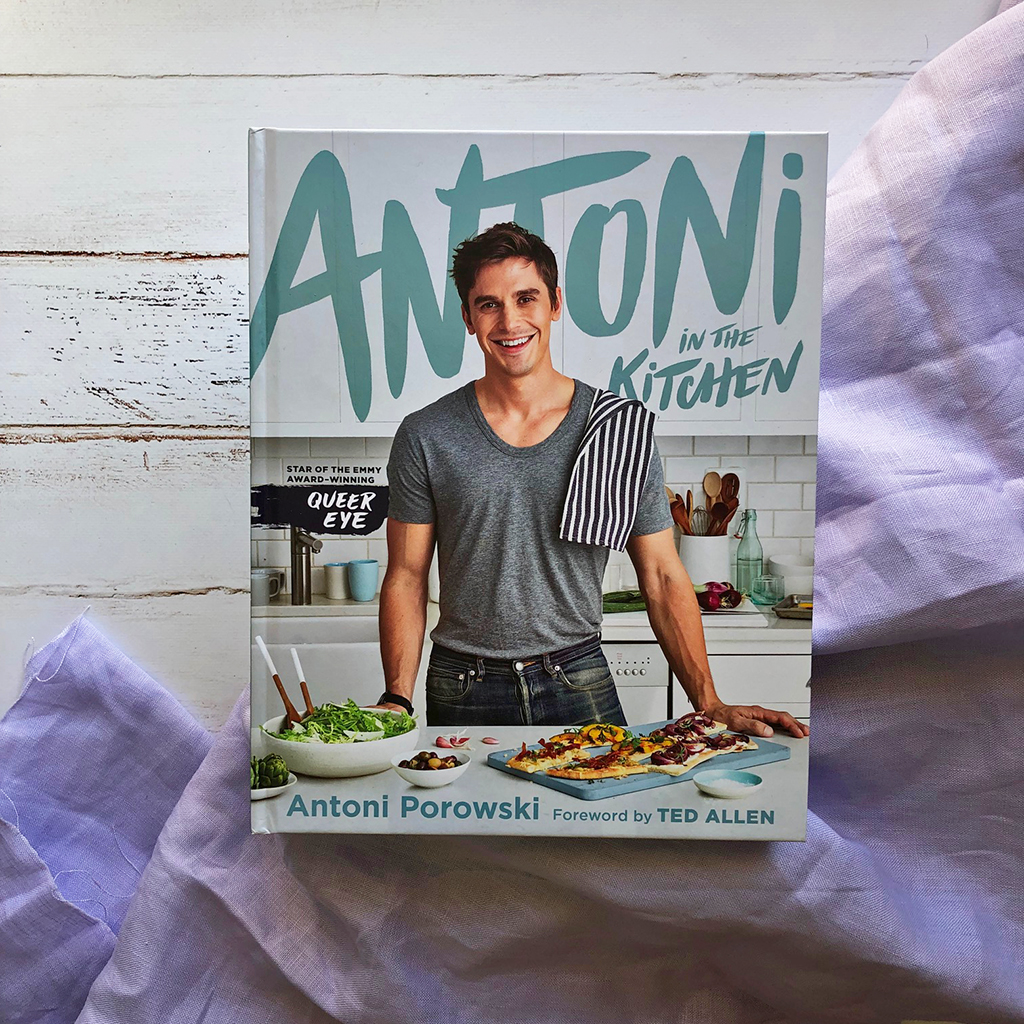 Queer Eye sensation and passionate cook Antoni Porowski is taking the world by storm. With a disarmingly fresh approach to food, Antoni inspires both newbies and knowledgeable cooks to get back into the kitchen.

Antoni’s gorgeous debut cookbook brings together his trademark inclusive and accessible attitude to food with one hundred of his all-time favourite recipes. With chapters including Weeknight Healthyish Meals, Apps and Snacks and Bakes, the book celebrates Antoni’s love for fresh, casual and healthy cooking and the occasional indulgent feast.

Antoni gets dinner on the table fast with Chicken Milanese with Baby Tomato Salad, makes visual stunners such as Roasted Carrots with Carrot-Top Pesto, playfully reboots Hi-Lo Poutine from his French-Canadian heritage and dazzles with Salty Lemon Squares for dessert.

As the food and wine expert of the ‘Fab Five’ style gurus on Netflix smash hit Queer Eye, Antoni burst onto our screens in 2018. A self-taught chef, Antoni’s degree in psychology helped him hone his underlying philosophy that food should tell a story because the heart and stomach are interconnected. On release, the show had a 100% rating on review website Rotten Tomatoes. In 2018, the show won three Emmy Awards and was nominated for four People’s Choice Awards.

Antoni in the Kitchen is a cookbook for newbies and amateur cooks — for people who want to dabble in the complex recipes, but only a little.

Whilst Antoni has worked in restaurants and as a private chef, Antoni is not a qualified or classically trained chef. The casting director of Queer Eye plucked him out of a gallery where he was working as a curator.

I do find it hilarious that Antoni has a cookbook, and I sense it must be a result of the responses he’s received from his appearances on Queer Eye. His cooking on the show is often minimal, easy things that sometimes aren’t really ‘cooking’. Sure, how can you possibly convey the complexities of cooking in such a short time frame? And to people who probably don’t know how to boil an egg? But Bobby redesigns entire houses…so…

Also, how much of this book is from Antoni himself? He gives a pretty strong acknowledgement to co-author Mindy Fox in the book. I find that odd for a cookbook. Did he show her recipes or meals and she transcribed how to make them?

“Was I enough of a food guy? Many of the contenders I’d been up against for the role of Queer Eye ‘food and wine expert’ had longtime careers as chefs, food-industry people and food personalities…I saw myself as an aspiring actor, my work in the food business as a means to an end.”

The recipes are relatively simple to make, and are split into 7 simple categories that any cook would be interested in using — Apps and Snacks, Green, Veg and Other Sides, Soups and Stews, Pasta and Rice, Weekend Healthyish, Animal and Bakes. Would be great to have some sort of cocktail/drinks menu, considering he also does touch on wine in the show.

The photos in the book are one of the highlights — not just the exquisite food photos but the high-quality, almost ‘lifestyle’ images of Antoni that fans can fawn over. Photos that make him appear like a regular person, but are incredibly glamorous photos of him out and about in New York City.

Because the recipes in this cookbook reflect Antoni’s food journey, elements of Antoni’s Polish heritage can be spotted as you make your way through the recipes. Scattered intermittently throughout the book are also little anecdotal memories or stories that Antoni reflects on, drawing a connection between his food and his childhood.

Some of the recipes he recalls from his travels or his high school years, and these little stories allow the reader to feel more connected to Antoni. Additionally, helpful tips and tricks are published in the book: his Top Ten Culinary Mantras, adding Pomegranate molasses to sweet and savoury dishes, and when peeling fresh ginger, use the tip of a small spoon to scrape away the skin.

“My middle sister, Aleksandra, first made a puree like this for me when I was a picky kid who refused to eat his veg. Roasting the squash caramelises it, and lime juice and peppery dried chilli perks things up.”

This book is not ideal for seasoned chefs who want complex recipes, with ingredients that spill over three pages. These recipes are easy, simple, quick, but also tasty. They’ll appeal to the kinds of people who are picked for Queer Eye — struggling in the kitchen. People who are beginner cooks and who want to improve their cooking skills will also find much to learn in this book. 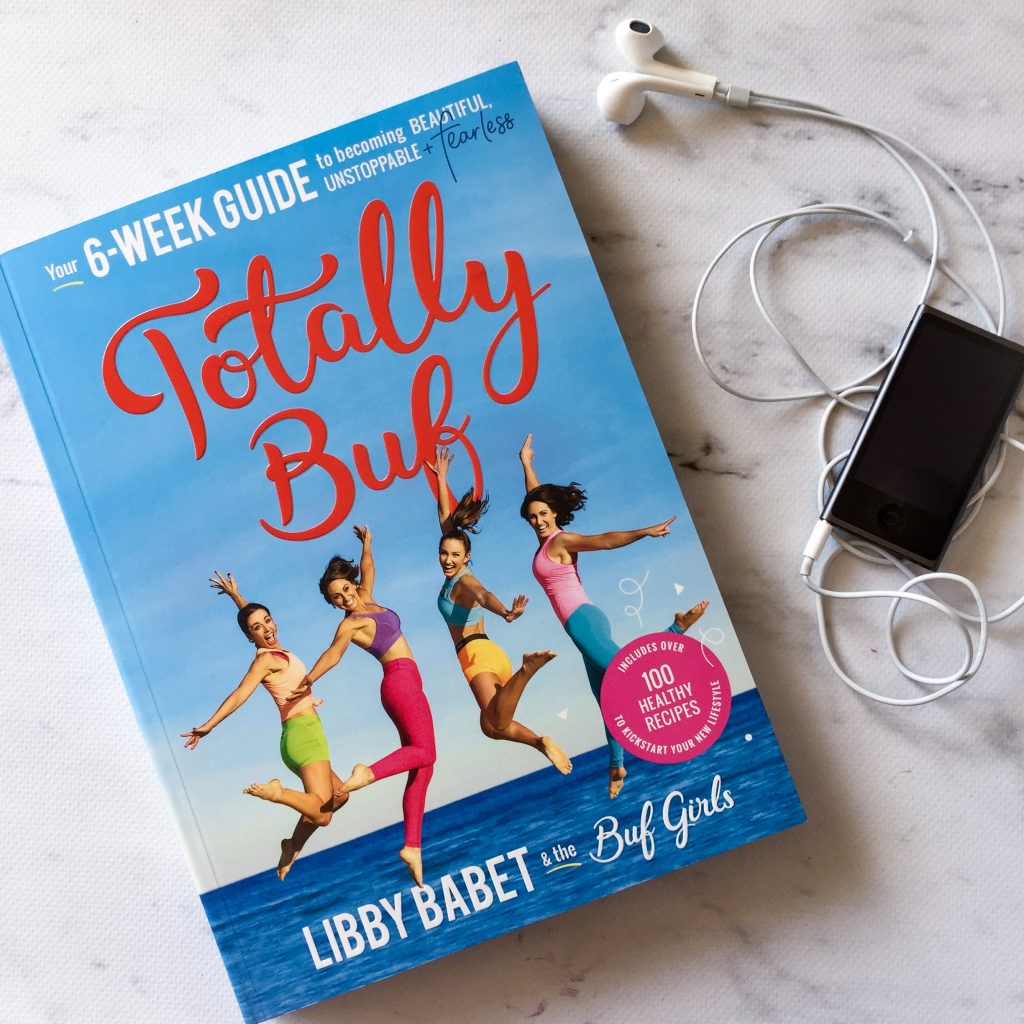 The BUF Girls are Australia’s revolutionary new team of fitness and nutrition gurus for a new generation of healthy-minded, empowered women.

Being a BUF Girl isn’t about competition, body image or comparison, it’s about friendship and community, healthy bodies and healthy minds, and inspiring, supporting and celebrating all women.

This 6-week plan (one focus habit each week) will completely transform your health and wellbeing, with core fitness, nutrition and mindset tips that every woman can implement in their day-to-day lives.

With over 100 recipes (including vegan and vegetarian options), easy exercise and nutrition tips, TOTALLY BUF will give you all you need to be a BUF Girl.

Today I’ve got another recipe extract for the blog. Totally BUF is a gorgeous guide to being healthy and happy, and the recipes in this book are not only super healthy and delicious, they’re also beautifully presented. There are so many bright, beautiful colours used – it makes the reader all the more eager to start cooking some of these delicious recipes!

Alongside these recipes, the book also features tons of health and fitness advice, as well as motivating & inspiring information and gorgeous photos of the authors.

Thanks to Hachette Australia, I’ve got an extract of the Sweet Potato Gnocchi for Jess Just Reads. 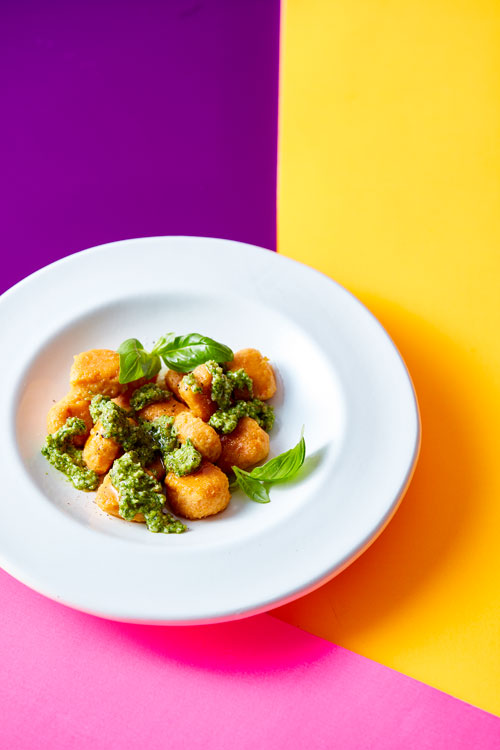 1.
Peel the sweet potato, chop into chunks and cook until soft. You can choose how you want to cook it: roasting and steaming both work well. Once cooked, mash the sweet potato until smooth. Transfer to a large mixing bowl and leave to cool for 15–20 minutes.

2.
Combine the cooled sweet potato mash with the egg yolk and Parmesan, then gradually sift in the flour until you get a non-sticky dough mixture. (You might find that you use less than 2 cups, which is totally fine!)

3.
Dust your kitchen bench with a little flour and transfer the dough to the bench. Knead for a few minutes, then divide the mixture into four equal portions and roll each portion into a sausage shape (you want it to be around 3 cm thick). Slice each sausage into 3 cm pieces.

4.
To cook your gnocchi, add to a pan of boiling water. When it floats to the top, it’s ready! Top with your favourite sauce, and vegetables on the side, season with black pepper and serve.

Totally BUF: Your 6 week guide to becoming BEAUTIFUL, UNSTOPPABLE and FEARLESS by Libby Babet and the BUF Girls ($39.99), published by Hachette Australia. 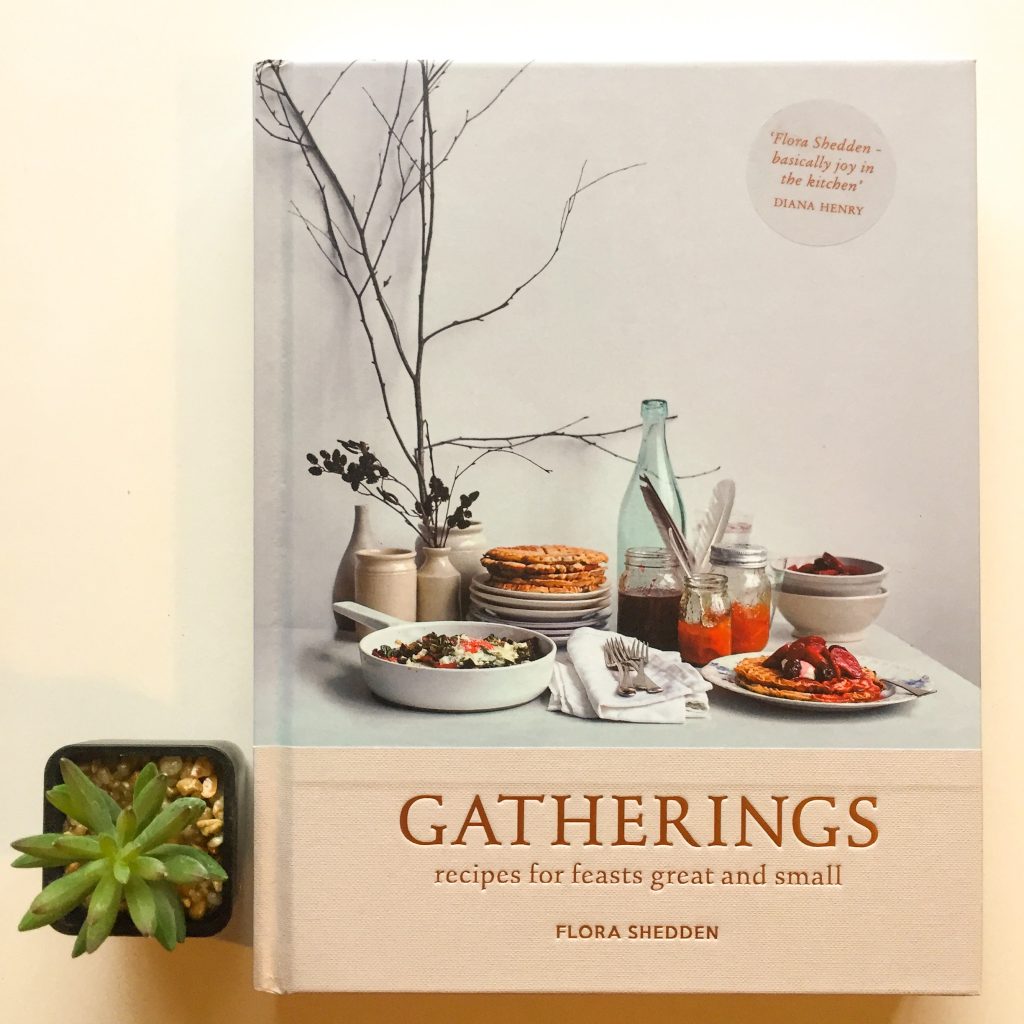 A gathering is an easy way of cooking and hosting. It means no pressure, no code of conduct, and everyone – cook included – can actually enjoy themselves.

This collection is a mixture of modern dishes, staple snacks, salads and sides, interesting bakes, and puddings perfect to end a feast with. Nothing overly fussy or complicated, just tasty, pretty plates of food.

Choose from the chapters led by occasion or pick and choose from dishes such as Sloe Gin Braised Venison, Cocoa Nib Brownies and Redcurrant Pavlovas to put on a spread. There are menu ideas to show you how.

Today I’ve got something rather different for all you readers — an extract from a beautiful cookbook by Flora Sheddon, GATHERINGS. I’m months late posting this (it was published in February 2017) but this cookbook really is gorgeous. It takes the effort out of entertaining with a collection of recipes to enjoy cooking and eating.

See below for an extract recipe from the book: Floral Empire Biscuits. Thank you to Hachette Publishers for supplying the extract (photo and recipe). 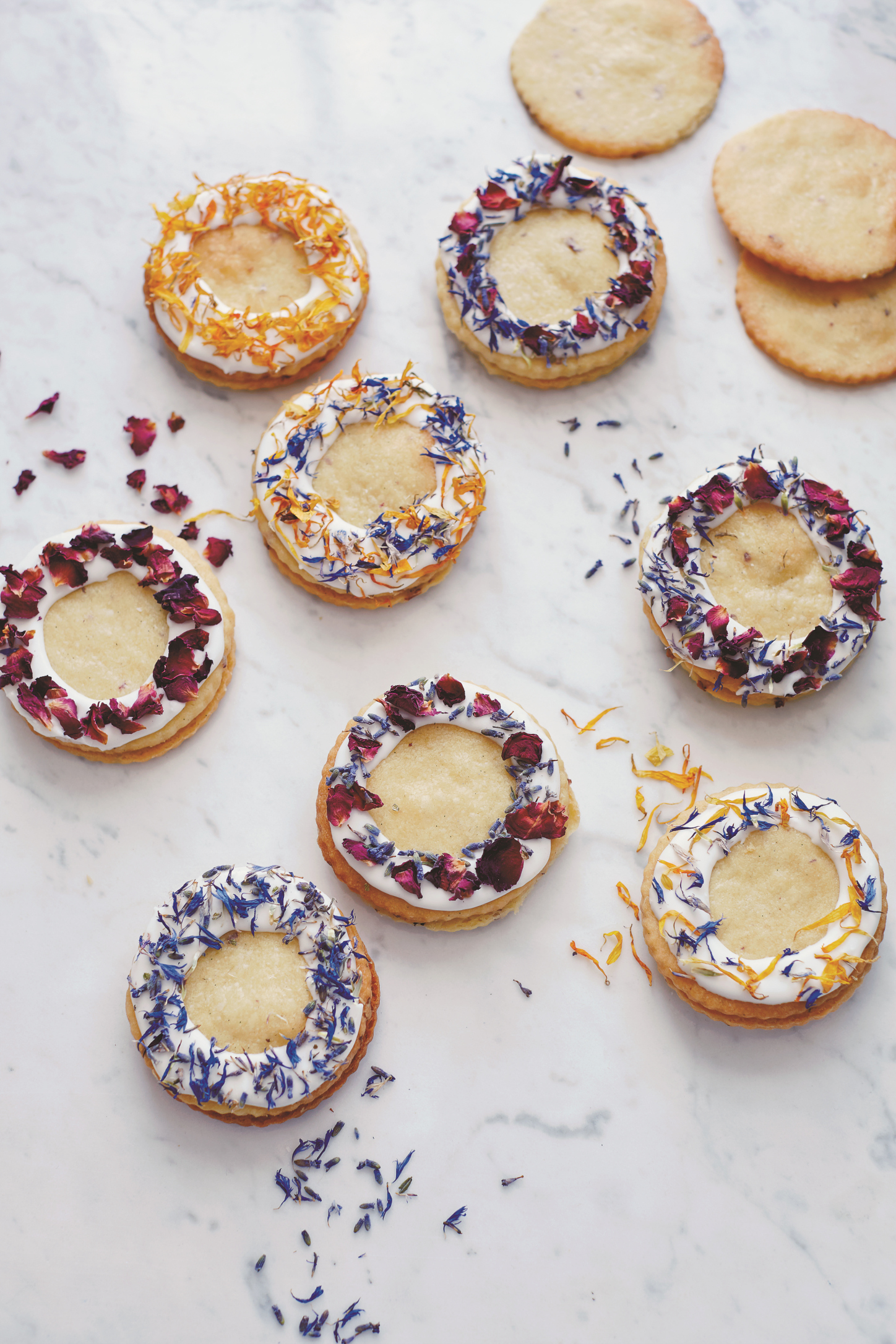 I don’t think the Empire biscuit is as popular anywhere else as it is in Scotland. They are sold in most wee bakeries – you would struggle to walk more than 500 yards in Glasgow without seeing one for sale.

As a kid I was only in it for the sweetie on the top (I have an uncle who adores Empire biscuits, so this was never an issue), but nowadays I love the whole thing.

This version omits the jelly tot (I can only apologize) in favour of a more floral and slightly prettier theme. It is very much a floral Flora creation.

I would highly recommend making the Strawberry and Elderflower Jam for this recipe, but you can, of course, use whichever berry jam takes your fancy.

Simply make sure it is a fairly thick one so that it won’t come oozing out the sides.

To make the biscuits, blitz the flour, butter, sugar, vanilla and dried flowers in a food processor until a dough forms. Alternatively, rub the butter into the other ingredients and knead by hand until you achieve a dough.

Roll out the dough on a lightly floured work surface until it has the thickness of a pound coin. Use a fluted round cookie cutter to cut out the biscuits, then reroll the scraps and repeat. You should get 24–30 biscuits, depending on your size of cutter. Transfer the shapes to the prepared baking sheet. Bake for 12–15 minutes or until just beginning to turn golden. Leave the biscuits to cool on the baking sheet for 5 minutes, then transfer to a wire rack and leave to cool completely. For the icing, mix the sugar with a splash of milk in a bowl until you have a thickish icing – it should be spreadable. Transfer to a piping bag fitted with a round nozzle.

To assemble the biscuits, pipe a circle of the icing on top of half the biscuits. While the icing is still wet, sprinkle with some of the petals. Dollop a teaspoon of jam on the underside of each of the remaining half of the biscuits, then sandwich together with the decorated halves on top.
Allow the icing to set fully. These biscuits are best eaten on the day of making, as the jam tends to soften them after 24 hours. You can, however, bake the biscuits up to 3 days in advance of serving and assemble them in the morning of the day they are required.

Gatherings by Flora Shedden is published by Hachette Australia in hardback at $39.99 and ebook $19.99.