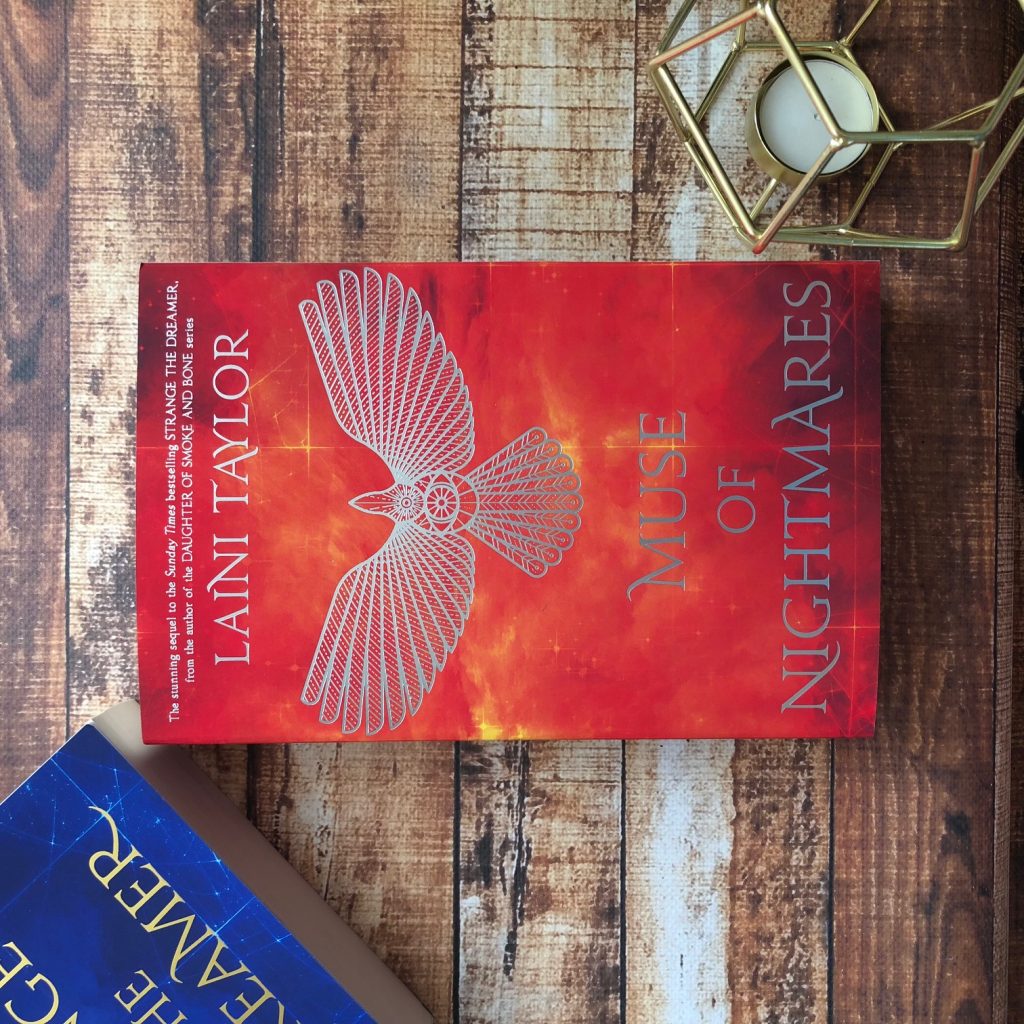 Muse of Nightmares by Laini Taylor is the second and final book in this fantasy duology. The events in this book take place almost immediately after the end of Strange the Dreamer.

It’s been over 18 months since I read, loved and reviewed Strange the Dreamer for this blog. I’ve been desperate to get my hands on this sequel, and it’s been one of my favourite reads of 2018.

At the end of Strange the Dreamer, former librarian Lazlo Strange is revealed as a godspawn, a bastard child. 17 year-old Sarai has died after falling from the citadel and becoming impaled below.

In Muse of Nightmares, the reader is thrust back into the magical world of Weep and the Mesarthim, where dreams become nightmares and the godspawn want vengeance. Minya has saved Sarai’s soul so that she can live on, but she’s controlled by Minya and can’t always act of her own free will. She is at Minya’s mercy.

“Sarai has lived and breathed nightmares since she was six years old. For four thousand nights she had explored the dreamscapes of Weep, witnessing the horrors and creating them. She was the Muse of Nightmares.”

Strange the Dreamer was really about Lazlo, but Muse of Nightmares is very much Sarai’s story. The blue-skinned goddess is front and centre in this book. And despite how the first book ended, she has a huge role in this sequel and her relationship with Lazlo strengthens and grows throughout this book.

We meet two new characters in Muse of Nightmares — sisters Kora and Nova. Both of them are intended to be sold by their father and married off, but they both harness very strong powers and are destined for much much more than that. We follow their journey throughout the book and as you can imagine, they cross paths with the other main characters in the story — Lazlo, Sarai and the other children.

The writing in the book is well-paced with concise sentence structure and the perfect build of tension. The story moves quite slowly but that’s not a bad thing. The reader can sense a big confrontation coming, but before we get there, we need to understand so much more about Kora and Nova and how the godspawn will seek vengeance on Eril-Fane and the city of Weep.

The character development is really strong in Muse of Nightmares. Minya holds a pivotal role in the plot, and we dive into her memories and find out more about her past and her trauma and how and why she’s transformed her army to benefit her own agenda. We come to understand her, and at times, sympathise for her.

“This was Minya’s dream. It if was keeping a secret, it was her secret, and her mind keeping it…Sarai thought that Minya must be hiding something with that blur. She needed to know what it was. She gathered her power around her. She was the Muse of Nightmares. Dreams did her bidding. They could not hide things from her.”

It’s wonderful to read a sequel that is just as good, if not better, than the original. I was invested in this book from the very first page, and this series has fast become one of my favourite fantasy series.

As Kora and Nova’s story develops and their paths cross with the other characters, tensions rise and the stakes become much higher and everything is brought to a very dramatic and satisfying conclusion.

In this sequel, love and hate, revenge and redemption, destruction and salvation all clash. It’s been worth the long wait for this book to arrive, and I highly recommend this duology to fantasy lovers.