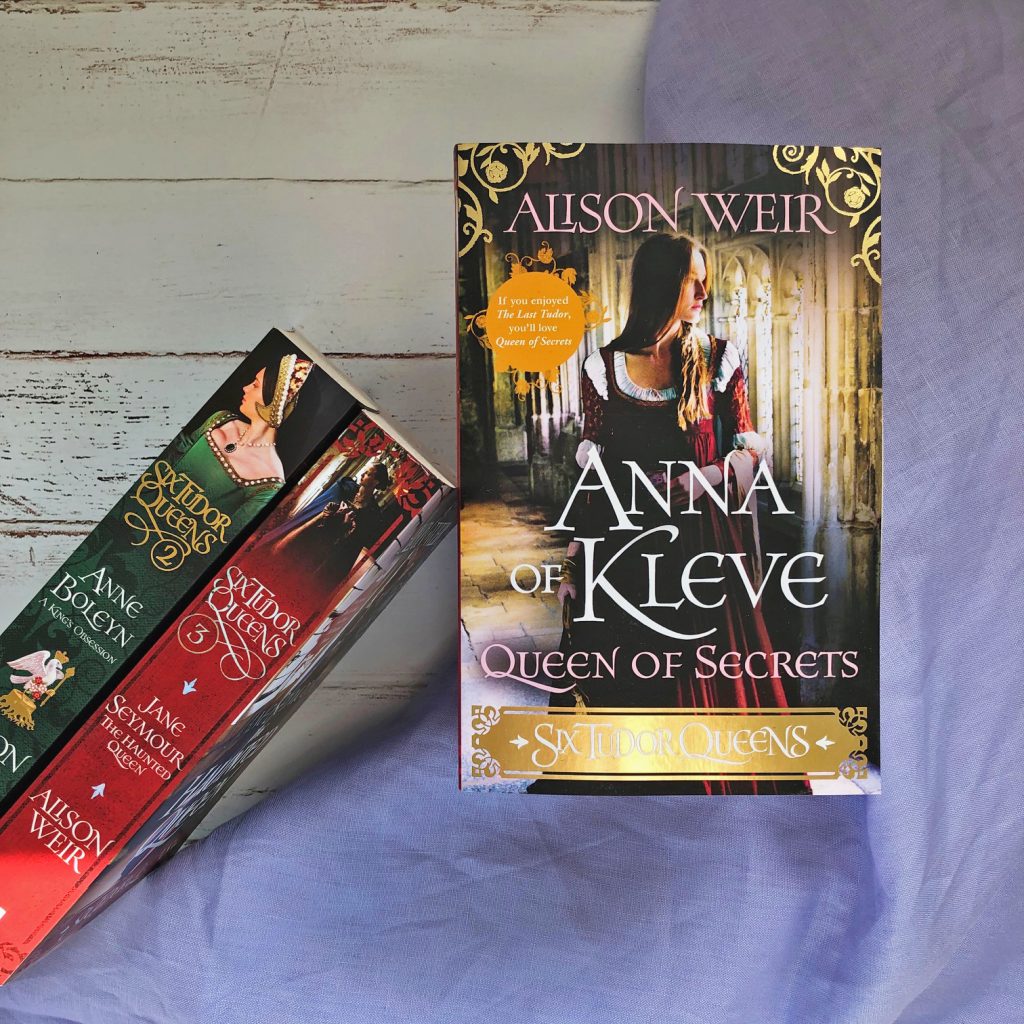 Alison Weir, historian and author of KATHERINE OF ARAGON: THE TRUE QUEEN, ANNE BOLEYN: A KING’S OBSESSION and JANE SEYMOUR: THE HAUNTED QUEEN, paints a spellbinding portrait of Anna of Kleve, Henry VIII’s fourth queen.
A GERMAN PRINCESS WITH A GUILTY SECRET.

The King is in love with Anna’s portrait, but she has none of the accomplishments he seeks in a new bride. She prays she will please Henry, for the balance of power in Europe rests on this marriage alliance. But Anna’s past is never far from her thoughts, and the rumours rife at court could be her downfall. Everyone knows the King won’t stand for a problem queen.

ANNA OF KLEVE
THE FOURTH OF HENRY’S QUEENS
HER STORY

Acclaimed, bestselling historian Alison Weir draws on new evidence to conjure a startling image of Anna as you’ve never seen her before. A charming, spirited woman, she was loved by all who knew her – and even, ultimately, by the King who rejected her.

History tells us she was never crowned.
But her story does not end there.

This is one of my favourite book series’ and every year, I look forward to the latest Alison Weir Tudor Queens novel. Anna of Kleve: Queen of Secrets, the fourth book in this series, was just as fabulous as the books that precede it.

Anna is probably one of the lesser known Queens, perhaps because she was the least scandalous. She travelled from Spain to England to marry the King, but he never fancied her and so the whole marriage ended after just six months together.

Alison illustrates Anna as kind, compassionate and sensible. She is naive and a little too trusting at times, but she is determined and she’s intelligent. When she is very young, she falls in love with her cousin Otho von Wylich and gives birth to a secret child. Otho doesn’t even know about it, and Anna stays away from home in secret to have the child. The boy is then adopted to a loving family.

When King Henry chooses Anna to be his next wife, Anna must work hard to keep her secret.

“Picking up her mirror, she gazed into the burnished silver and appraised her image. Yes, it was pleasing, but beautiful? No. She had a rosy complexion, and a heart-shaped face with a pretty mouth and finely arched brows, but her eyes were too heavy-lidded, her chin too pointed, and her nose too long, too broad at the tip. Yet she was tall and graceful, with a good, slender figure and delicate hands.”

These books read like they’re a fictional story, but they’re based on some truths. Each Queen is portrayed so vividly that you feel like you really understand them and their motives. Very little is known about Anna of Kleve, so there’s a lot of fiction to this book, but that’s what makes it so fabulous.

It’s interesting reading about Henry VIII as the books progress. He’s now 46 years old, he’s overweight, and the sores on his leg are infected and oozing pus, and they’re causing him a great deal of pain. He’s no longer the seductive King he once was! Anna and Henry’s marriage was never consummated and from the sound of it, that was a huge blessing for Anna. Not sure Henry was very desirable at this stage.

“This could not be the man in the portrait she had seen at Calais! He had been in his prime, attractive and smooth-featured. He bore barely any resemblance to the man standing before her now. Why had no one thought to prepare her for the reality? For the King looked far older than a man not yet fifty; his ace was stern, and bore the marks of temper and ill health. And he was huge!”

From reading the author’s note at the end, it’s clear that this book has fictionalised her tale and added more to her story than the other Queens before here. There’s no evidence that Anna had an illegitimate child, or that she was in love with her cousin. But given Anna was Queen for only six months, and she was — as we understand it — the most liked Queen after her divorce and the least scandalous one, I imagine her story wouldn’t be that interesting if there wasn’t embellishments.

I was actually wondering how Alison was going to write this book without making it very short and very boring. I’m glad she embellished — it makes everything much more entertaining! You can always read Alison’s author’s note at the end to find out what is fact and what is fiction — those author’s notes are always really interesting.

“Anna felt a sense of relief seeping through her veins. How humiliating for a man as powerful as the King to suffer impotence. Perhaps he had been dreading this marriage as much as she! And yet, he had been aroused — she had felt it. Was it the sight of her body that had unmanned him?”

I love this series, and this latest instalment. For anyone even remotely interested in Henry VIII’s wives, I recommend you start at the beginning with Katherine and make your way through Alison Weir’s books. They read like fiction, but they’re researched and they’re all fascinating reads.