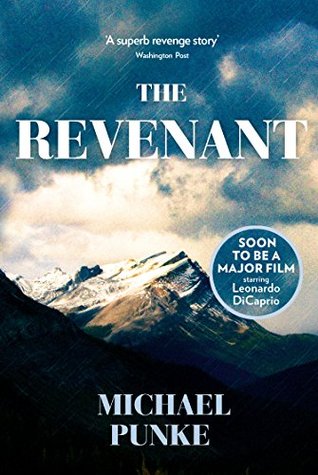 The trappers of the Rocky Mountain Fur Company live a brutal frontier life. Hugh Glass is one of the most respected men in the company, an experienced frontiersman and an expert tracker.

But when a scouting mission puts Glass face-to-face with a grizzly bear, he is viciously mauled and not expected to survive. Two men from the company are ordered to remain with him until his inevitable death. But, fearing an imminent attack, they abandon Glass, stripping him of his prized rifle and hatchet.

As Glass watches the men flee, he is driven to survive by one all-consuming desire: revenge. With shocking grit and determination, he sets out on a three-thousand-mile journey across the harsh American frontier, to seek revenge on the men who betrayed him.

This book is the ultimate story of vengeance. Hugh Glass is mauled by a bear and the two men he was travelling with rob him and leave him to die. And then Hugh Glass vows to survive so he can seek his revenge. In other words, this is a role that’s fantastic for Leonardo DiCaprio, who will play Hugh Glass in the move adaptation (out January 2016 – trailer at the bottom of this post).

The opening chapter is fantastic, and you’ll anticipate this just from the first sentence alone: “They were abandoning him”. The ominous tone of the first chapter immediately draws the reader in, as well as the detailed way that Michael Punke describes the bear attack and the subsequent events that lead to Hugh Glass being alone and vulnerable in open plains. Michael Punke gives detailed descriptions of setting and actions. Hugh Glass spends the first third of the book trying to survive on his own and create shelter, find food, and fight off predators etc. Punke uses descriptive sentences to tell us how Glass survives, and strays away from mentioning Glass’ feelings and emotions during this time.

The story switches between Hugh Glass and the two men that abandoned him. One of the men was a young boy who was influenced by their other companion, Fitzgerald. In the film adaptation, Thomas Hardy will play Fitzgerald, who is cold, ruthless, and has no remorse. The other men lie and say that Hugh Glass is dead, and Michael Punke has written their characters so that you feel nothing for them — you don’t hate them and you don’t sympathise for them. You just know, by the development of the story, that Hugh Glass will eventually catch up with them.

There are many near misses in the book when Hugh Glass is almost killed by Indians and is forced to watch his other companions (that he met along his journey) be murdered and mutilated. This helps to fasten the pace of the story and maintain the reader’s interest.

At times, the story felt a little slow. For the first third of the novel, Hugh Glass is all alone, trying to survive in the harsh winter, and after a while, the reader is desperate for his story to develop. The reader is desperate for some other characters, and for some interaction between the now scarred and injured Glass, and other men he meets on his way to finding Fitzgerald and the boy. But Michael manages to pick this up in the final 50 pages of the novel when Hugh Glass actually does find the two men.

I would recommend this book to people who love Western novels. This novel is based on true events, and it’s hard to believe that anyone could survive the horrific injuries that Hugh Glass sustains after the bear attacks him. The Revenant is set in the early 1800s, and is raw, rich, and rewarding for the reader.