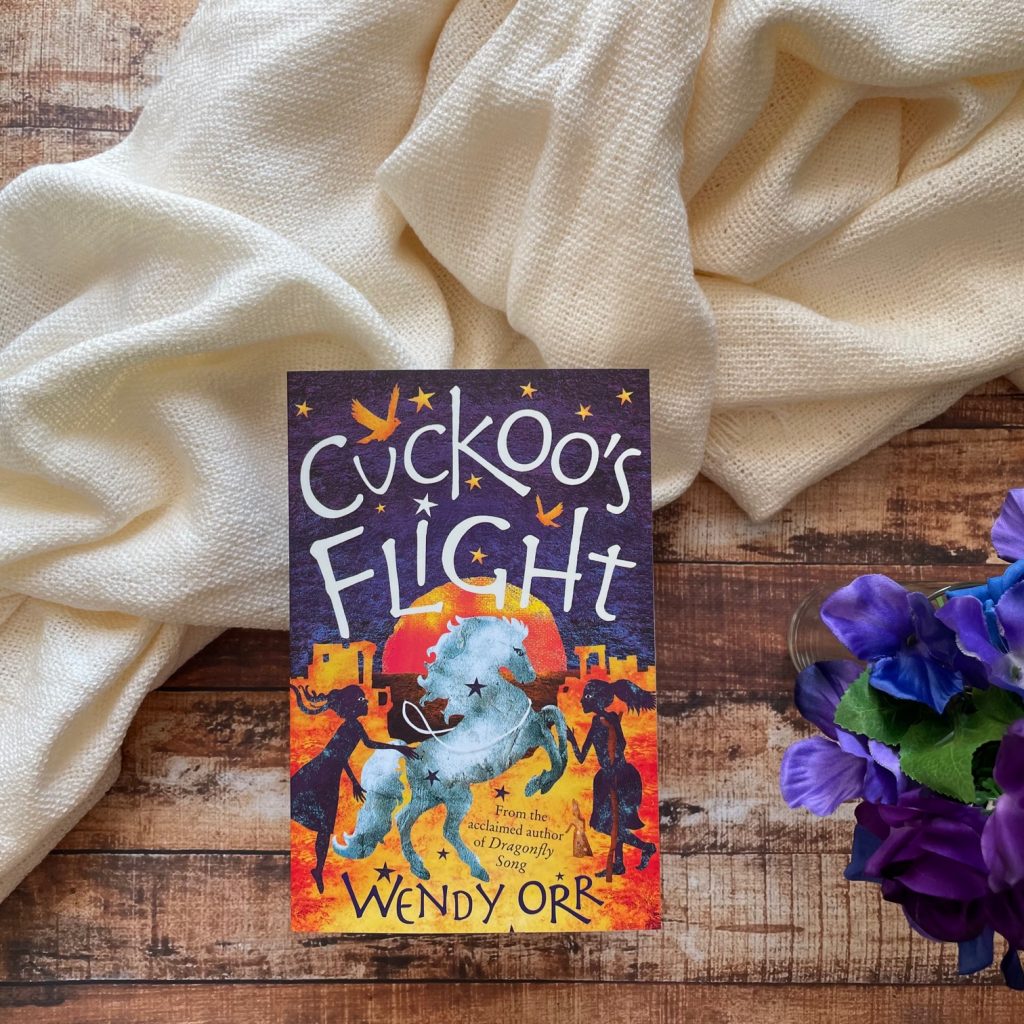 When Clio’s town in Bronze Age Crete is threatened by seafaring raiders, she faces the greatest sacrifice of all. Can Clio, her herd of horses and a new young friend find a way to change their destinies?

When a raiders’ ship appears off the coast, the goddess demands an unthinkable price to save the town – and Clio’s grandmother creates a sacred statue to save Clio’s life.

But Clio is torn between the demands of guarding the statue and caring for her beloved horses. Disabled in an accident, she must try to put aside her own grief at no longer being able to ride – and in the process, save a friend’s life and stop a war.

Cuckoo’s Flight is Wendy Orr’s third middle grade novel set in the Bronze-Age Mediterranean, following on from Dragonfly Song and Swallow’s Dance. Whilst this is the third novel set in this time period, and there is some overlap in characters and history, you don’t need to read the other two novels to be able to read Cuckoo’s Flight.

The setting is one of the strengths of this novel, as well as the seamless transition between prose and poetry that readers will recognise from Wendy’s other works.

Wendy captures the era with accuracy and thorough research. Immediately, you’re swept up in Clio’s saga. She’s tenacious, resilient and strong, brave and confident. She doesn’t conform to what the community expects of her, and looks for alternate solutions. She’s self-driven, but she’s also a great teacher of others. She doesn’t let her disability — a stiff, twisted leg from when she fell off a horse as a young girl — stop her.

“Clio can’t imagine life without her grandmother. She knows that only the gods live forever and that all other living creatures — birds, beasts and people, dragonflies and dolphins — will return to the Great Mother one day.”

Wendy’s Bronze Age trilogy are all female-centric, with young female characters as the protagonists. They are all disadvantaged in some way. Perhaps they’re physically disadvantaged, or they’re an outcast in society. Perhaps they’re poor. Wendy crafts her protagonists so that readers can watch them rise above what others expect of them. Young readers will feel reassured that bravery and courage will always save the day.

Whilst this may appear to be an adventure series, a rollercoaster of a journey for all the characters involved, there’s a lot of heart and depth to these novels. They’re multi-layered and offer insightful characterisation — all readers will find something to love within these books.

“The gully at the river’s bend
carved from the steep bank
washes silt to the water
trapping the pebbles from the creek above —
gravel and silt forming a ledge
across the river, nearly to the other shore.”

Admittedly this story takes a bit longer to engage with the characters than the previous two works. I felt like the opening started in the wrong place. We’re thrust into Clio’s life a little too chaotically, and it does take a few chapters for the reader to settle into the story. Additionally, the pacing in the novel is quite fast so we don’t have a lot of time to really sit with the characters. Cuckoo’s Flight is very much a plot-driven novel.

“On her wooden stage in the dim light of the courtyard, with the east mountain looming darker behind her, the Lady begins to sing. Slowly, slowly, she calls the sun up from behind the mountain into the pale sky. Blinding the audience, streaking the sky with pink and gold, the miracle of sunrise happens again.”

Imaginative and enticing historical fiction, Cuckoo’s Flight and its two predecessors will engage any young reader.