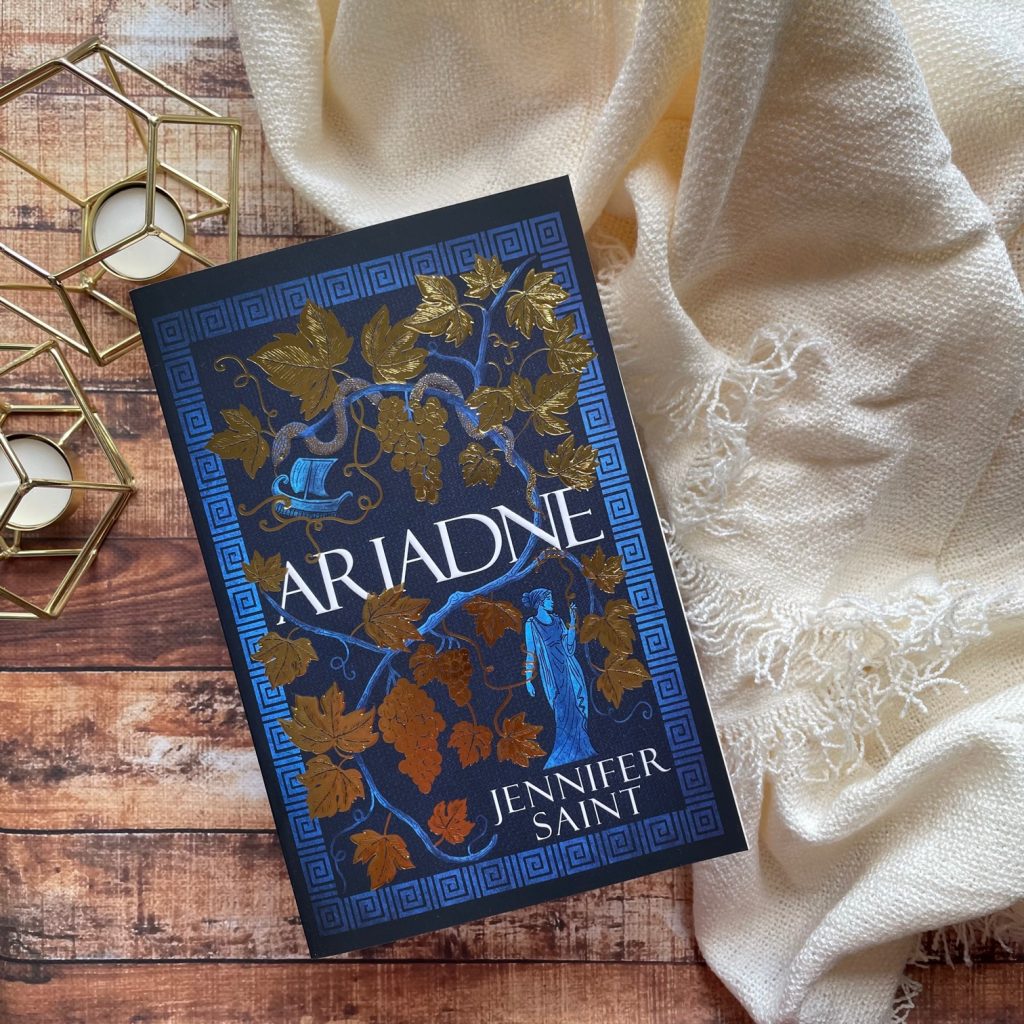 As Princesses of Crete and daughters of the fearsome King Minos, Ariadne and her sister Phaedra grow up hearing the hoofbeats and bellows of the Minotaur echo from the Labyrinth beneath the palace. The Minotaur – Minos’s greatest shame and Ariadne’s brother – demands blood every year.

When Theseus, Prince of Athens, arrives in Crete as a sacrifice to the beast, Ariadne falls in love with him. But helping Theseus kill the monster means betraying her family and country, and Ariadne knows only too well that in a world ruled by mercurial gods – drawing their attention can cost you everything.

In a world where women are nothing more than the pawns of powerful men, will Ariadne’s decision to betray Crete for Theseus ensure her happy ending? Or will she find herself sacrificed for her lover’s ambition?

ARIADNE gives a voice to the forgotten women of one of the most famous Greek myths, and speaks to their strength in the face of angry, petulant Gods. Beautifully written and completely immersive, this is an exceptional debut novel.

Infatuated and desperately in love with the handsome Theseus (Prince of Athens), the young and naive Ariadne betrays her father and passes along the secret to defeating her brother, the Minotaur. Afterwards, Theseus’ promise to whisk her away to Athens turns out to be a falsity, and Ariadne soon finds herself abandoned on the island of Naxos. Elsewhere, we follow Ariadne’s sister Phaedra, who also comes to experience Theseus’ deception and betrayal.

“Later, would I want to claim that I was possessed of a madness, that I didn’t know what I was doing? That I moved through my story as the Fates directed, that I bore no responsibility for it myself?”

Ariadne positions its lens on forgotten women of Ancient Greece. Some readers may recognise or be aware of Ariadne and her sister Phaedra, but most will not. Their stories are often wrapped up within the tales of heroic men — other tales of might. This time, Jennifer is shining the spotlight on the sisters.

Both sisters are fierce and determined, and grow into adulthood with confidence. Ariadne takes control of her story and learns of her own strength, refusing to accept what’s expected of her. When Theseus betrays her, she finds a life for herself that makes her far happier and full of purpose than his love ever would’ve given her.

Phaedra may be more reserved and timid, but she knows when to pick her battles. She takes refuge in the shadows, protecting herself and collecting information. She builds on her suspicions about Theseus. Over time, she grows into a headstrong character who is determined to pursue her true desires, rather than simply accept the life she has.

Side note: this book has a gorgeous, gold-foiled cover that shines on a bookshelf.

“What could I say that would ever make him listen? That would ever turn his head and yank his attention sharply away from his important preoccupations — the affairs of the court, the rule of the peasants, his cool calculations that whirred away in his brain, endlessly weighing up the options before him to find what would bring him the greatest value.”

Whilst this novel far outshines criticism, there are a few faults of note.

The novel has a beautiful slow build, and readers will appreciate the character development and plot progression — the whimsical, magical feel of the story and its contents. The ending, however, feels very rushed, particularly around the conclusion of Phaedra’s story. It felt brief and sudden, and I couldn’t help but feel a little cheated.

Additionally, and I have seen this noted in many reviews, but there is a lot of info-dumping in the novel. Mostly through dialogue. Great long historical tales that go for pages and don’t feel natural in discussion. It contributed to a rather stiff and silted dialogue at times, and I found myself skimming those parts, or skipping them altogether.

“Where would one find the courage to do such a thing? I wondered. To cast away a life of riches and power and anything he desired; to give his life in the very prime of his youth for his people. To go knowingly and willingly into the snaking coils of our dungeon as living meat for our monster.”

Lyrical and gorgeously written, Ariadne will please fans of historical and mythological fiction. The novel will leave a lasting impressing on its readers.