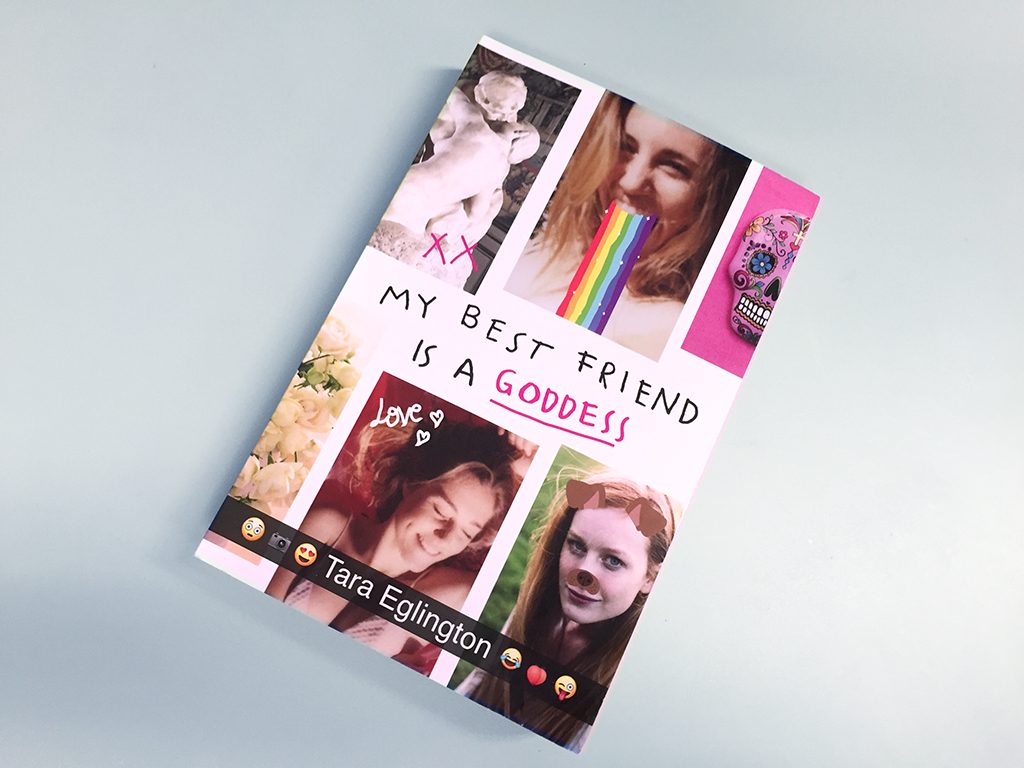 My Best Friend is a Goddess is the latest young adult novel by Australian author Tara Eglington, and I loved it. It’s a rather long novel for the young adult genre, but I devoured it over two days. The characters are realistic, three-dimensional and relatable. They also have flaws and insecurities, much like a lot of high school students in real life.

Emily and Adriana have been best friends since Year One, even when Adriana and her father moved away to Borneo for 18 months during Year Eight. When Adriana comes back home, she’s gorgeous – tall, skinny, pretty. Like a Victoria’s Secret model. And Adriana hasn’t just changed on the outside. She’s bold and confident, and she’s learnt to stick up for herself.

And although this is good in theory, Adriana begins to change from who she used to be. She’s quick to judge, and she’s brazen at times. Emily starts to see a different person, and since Emily has her own insecurities, the reader can understand why she suddenly feels unimportant and left out of Adriana’s new approach to life.

People stop Adriana in the street to tell her she should model. Boys throw themselves at her everywhere she goes. The popular girls at school, who made Adriana’s life hell once upon a time, are now following her on Instagram and sending her pics on snapchat. Adriana has suddenly joined the popular group at school, and Emily feels like she has no place.

Tara’s latest young adult novel is about what happens to a friendship when two girls change – and not just on the outside.

“I look in the mirror, ninety per cent because I want to end this embarrassing conversation and go get that hot chocolate, and ten per cent because of curiosity about Em’s total freak-out. I have to admit, it’s nice to not have the gappy teeth anymore, or the braces. I also love that my face is no longer half-obscured by big glasses. I hated seeing the world through black rims. My hair is longer and streaked from the sun. Besides that though, I don’t get what she’s freaking out at.”

In addition to all these strains on their rekindled friendship, there is a gorgeous new student at the school who both Emily and Adriana are crushing on. And this becomes the catalyst for a divide in the friendship – the cracks that were starting to appear in their once strong formation are well and truly deepening.
My Best Friend is a Goddess is told from both Emily and Adriana’s point of view – the chapters alternate between the girls and the reader gets to understand each of the characters and get to the know them. We begin to sympathise and understand both of them, even when they start to move away from each other and lose touch.

My Best Friend is a Goddess explores high school friendship, and no doubt female readers can relate to a number of the plot points in the novel. High school can be particularly hard to navigate, and that doesn’t take into account how difficult it can be to keep friendships stable. Girls often feel the need to be popular and be liked in school, and to join that very confident ‘popular’ group with their expensive clothes and their party invitations. The presence of boys at high school can result in competitiveness between girls, and that’s exactly what happens in this book.

There were a few things I disliked about the book. Some of the dialogue felt a little forced, and Theo didn’t always feel like a teenage boy. High school males can often be quite reserved and awkward around girls, and even though there are some boys who are a lot more confident, Theo felt a little too mature to be a high school student. He was gentlemanly and compassionate and caring, and he read like he was a lot older than he was supposed to be. Theo’s relations with Emily and Adriana were sweet, but not representative of real teenage relationships. I also felt that the ending was a little rushed. The plot was really well-developed and it moved at a good pace, but then it got to the climactic point in the story and Tara resolved the issues with a few journal entries that skipped over lengths of time – important lengths of time that I would’ve liked explored a little more.

Despite that, I really enjoyed reading this book and if you’re a fan of young adult fiction, I’d highly recommend it. It challenges a lot of stereotypes that you see in this genre, and Tara has diverted away from the cliché ending that I was worried was coming. This book is so relatable for high school students that I can’t recommend it highly enough for teenage girls to read. This book will make you realise that you aren’t alone, even if you feel like you are. This book will make you realise that even if that popular guy doesn’t like you, that doesn’t mean no guy will. And this book teaches readers to work hard and value their friends because life-long friendships are really difficult to find and even harder to maintain.