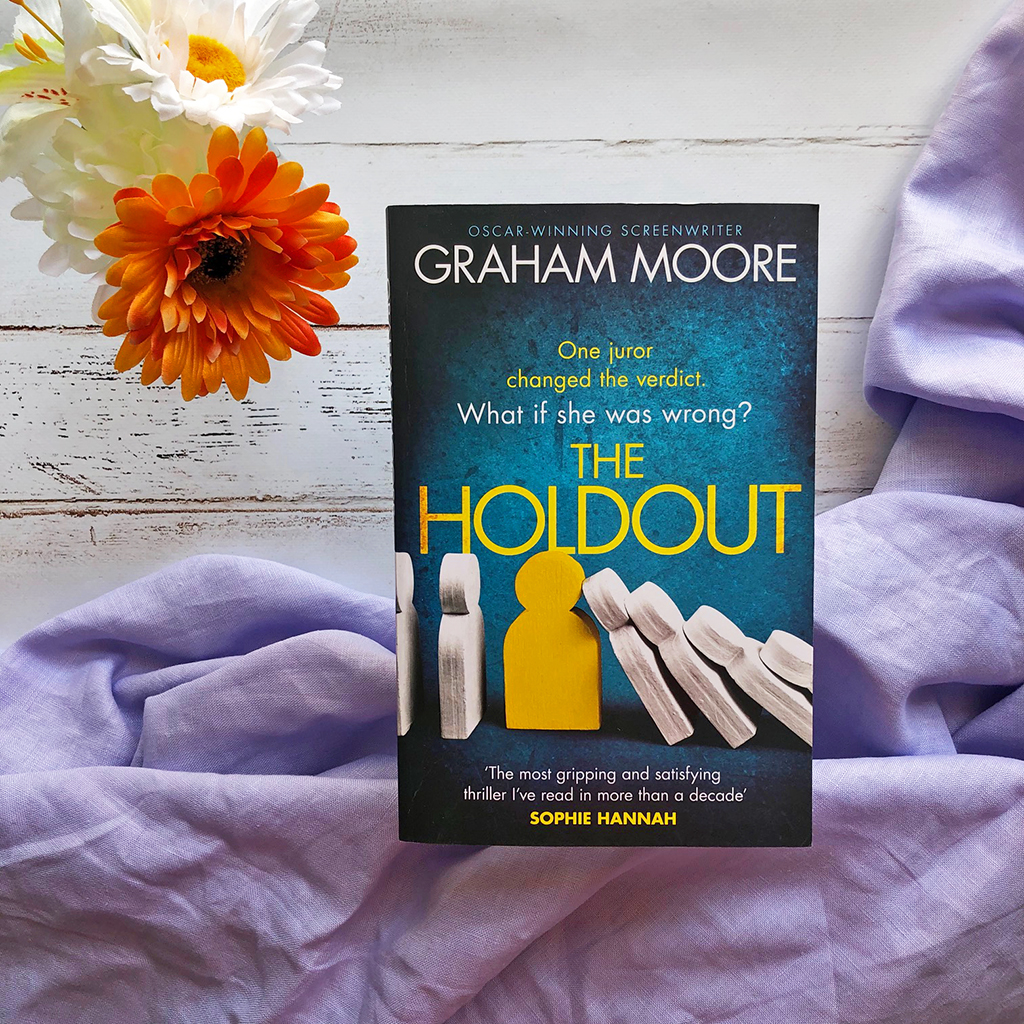 One juror changed the verdict. What if she was wrong? ‘Ten years ago we made a decision together…’

Fifteen-year-old Jessica Silver, heiress to a billion-dollar fortune, vanishes on her way home from school. Her teacher, Bobby Nock, is the prime suspect. It’s an open and shut case for the prosecution, and a quick conviction seems all but guaranteed.

Until Maya Seale, a young woman on the jury, persuades the rest of the jurors to vote not guilty: a controversial decision that will change all of their lives forever.

Ten years later, one of the jurors is found dead, and Maya is the prime suspect.

The real killer could be any of the other ten jurors. Is Maya being forced to pay the price for her decision all those years ago?

The Holdout by Graham Moore is a legal thriller that moves between two storylines and two different time periods — present day, and 2009.

Eleven years ago, Maya Seale convinced the rest of the people on her jury that the man accused of killing fifteen-year-old Jessica Silver — African-American high school teacher Bobby Nock — was actually innocent. When they let him go free, what resulted was ten years of targeted hate, disbelief and shock from the public.

In the present day storyline, one of the jurors — Rick — brings all of the jurors back together for a Netflix true crime television show. He says he has new evidence that will prove the man they thought was innocent actually did kill Jessica Silver. Maya starts to doubt the decisions she made in 2009.

“Nineteen years old at the time of the trial, Lila Rosales had been the youngest member of the jury. She had been in beauty school back then, and Maya had once marvelled at how much effort it must have taken to prepare her immaculately made-up face every morning. Now, Lila looked worn.”

Wrapped in legal investigations, The Holdout is gripping and keeps hold of its reader until the very end. It explores the U.S justice system and racism in America, building tension with each passing chapter.

Structurally, the book soars above its competition. The flashbacks are placed at opportune moments to ensure the pacing or the tension never wavers, and the plotting allows for an engaged and entertained reader. The Holdout will please all readers.

The chapters move between different characters, allowing readers to get a full glimpse at the past events that defined them all, and how their ‘not guilty’ verdict changed the course of each of their futures.

“She knew that he was looking for anything in her appearance — an unexplained bruise, a tear in her blouse — that could be of use later. There wasn’t much for him to work with. Maya was disappointingly presentable.”

Media scrutiny is a huge element to this book. After Maya and her fellow jurors help release Bobby Nock, they’re subjected to the wrath of the disbelieving public and media. Some of them struggle to find work, and even one decade later, Maya’s name is recognisable to strangers.

The characterisation for each of the core cast is multi-layered and complex. Maya, who is now a criminal defence lawyer, has moments of doubt over her decisions a decade earlier, but ultimately, she still feels confident that Bobby Nock is an innocent man and somebody else is responsible for the disappearance of Jessica Silver.

Each character is flawed, so when Rick ends up dead in Maya’s hotel room, all of them could’ve done it. Quite a few of the jury had things to gain from Rick’s death.

“Lined by tall bushes and lit only by infrequent street-lamps, the hidden staircase to the next hill provided decent cover. She could see a bigger, better-lit street up ahead, at the top. She wasn’t being followed. What roaming camera crew had found her car, they could stake it out for weeks.”

With sharp, unexpected twists and unforeseen secrets revealed throughout the book, The Holdout is unique enough to entertain even the most disinterested of audiences.

Recommended for readers of crime, thriller and mystery novels. The premise is unique and the characters three-dimensional — the crimes themselves will have you guessing until the final chapter.