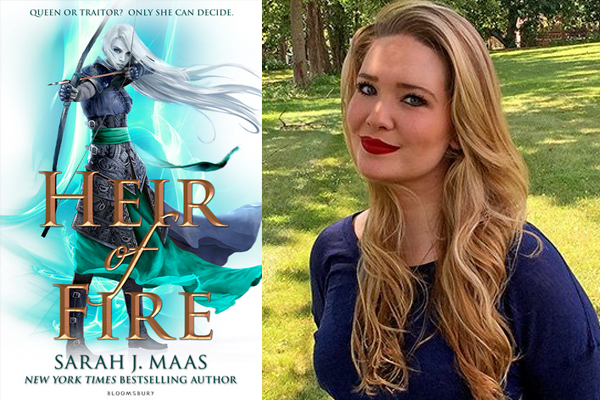 Heir of Fire is the third book in Sarah J. Maas’ Throne of Glass series, and this novel is just as fast-paced and fantastic as the first two. I devoured this book in two sittings and then I immediately went and bought the next book in the series because I was desperate to find out what happened.

The book starts where the previous novel, Crown of Midnight, finished. Celaena is lost and broken, but she has survived deadly contests and a shattering heartbreak. She must now travel to a new land to confront the darkest truth about her heritage and avenge the death of her dearest friend. At the same time, Chaol Westfall, who has sent Celaena away to protect her, has finally come to understand who Celaena is and what this means for their land. And now his job is to do all he can to help and protect her, even from afar and even if Celaena has no idea about Chaol’s sacrifices.

In Heir of Fire, brutal and monstrous forces are gathering on the horizon, and Celaena undergoes training with the mysterious Rowan Whitehorn to learn how to control her magic and understand who she is meant to be – Queen. Once she comes to understand her true destiny and once she can learn to control her magic, she will become Adarlan’s biggest threat – and his toughest enemy.

This is the first time in the series where I really felt like Celaena was starting to grow into her heritage. She becomes very powerful and she uses her intelligence to further her position in this new land and prove herself to Rowan, who is sceptical of her and is extremely unforgiving. Celaena is strong, brutal and resilient and she proves herself once more in this book. Sarah J. Maas has done a fantastic job of building the suspense whilst also uncovering information about Celaena’s past. We learn more about what happened to her parents when they died and how Celaena became the prisoner that she was when we met her in the first book, Throne of Glass.

Heir of Fire introduces fierce new characters and rebellions. I particularly loved Manon Blackbeak, who is an Ironteeth witch and the heir to the Blackbeak Witch Clan. She is a marvellous character who is cruel and ruthless, and yet cunning and resourceful. At times she is cold, heartless, scary, uncaring and dominating. But there are times in the story where we see a softer side to her. In this book, she is to choose a wyvern (a beast that she will ride into battle), and she chooses a smaller beast that has been cast aside by others. Manon is laughed at and doubted, but she rises above what those think of her and she uses her intelligence to soar above the competition. This is one of my favourite Manon quotes from the book:

I really loved Heir of Fire, and I recommend this series to anyone who is looking to discover something new to read. Sarah J. Maas is a great writer and I can’t wait to see where this series heads next.

After serving out a year of hard labor in the salt mines of Endovier for her crimes, 18-year-old assassin Celaena Sardothien is dragged before the Crown Prince. Prince Dorian offers her her freedom on one condition: she must act as his champion in a competition to find a new royal assassin.

Her opponents are men-thieves and assassins and warriors from across the empire, each sponsored by a member of the king’s council. If she beats her opponents in a series of eliminations, she’ll serve the kingdom for three years and then be granted her freedom. Celaena finds her training sessions with the captain of the guard, Westfall, challenging and exhilirating. But she’s bored stiff by court life. Things get a little more interesting when the prince starts to show interest in her… but it’s the gruff Captain Westfall who seems to understand her best.

Then one of the other contestants turns up dead… quickly followed by another. Can Celaena figure out who the killer is before she becomes a victim? As the young assassin investigates, her search leads her to discover a greater destiny than she could possibly have imagined.

This book is fantastic — an intriguing premise, three-dimensional characters and an unfolding plot that sucks you in and makes you desperate for the next book in the series.

Celaena is a wonderful main character. She’s confident, talented and in this high fantasy setting, can fend for her own. At times she’s a little up herself, but she is an assassin. She’d have to be confident in her own appearance and abilities to be an assassin. Celaena is witting, sarcastic, confident and very likeable. She says what she thinks and isn’t afraid of the consequences. She doesn’t need to lean on anyone for support and has the backbone to stand up for herself, even when she shouldn’t.

This book is high fantasy, but not at first. At the beginning, it almost seems to be a YA dystopian book, until one of the characters ends up dead, and then another and another. And soon, Celaena is discovering that there’s mythological beings beyond the castle walls that can kill her.

The plot develops and unfolds at a realistic and believable pace — nothing moves too quickly and nobody’s actions seem unjustified. The chemistry between Celaena and Dorian and also Celaena and Chaol helps push the story along. They form a love triangle, and by the end of the novel, it’s hard to tell who she will end up with. Prince Dorian is one of those characters who redeems himself throughout the novel — he seems to be a spoilt, womanising prince at the start, but as his personality is revealed, the reader starts to sympathise for him and they come to understand him. This love triangle has been written so well that it doesn’t seem to overpower the main storyline. The chemistry between Celaena and the two male characters is interspersed subtly into chapters that focus on the ‘bigger picture’.

Sarah J. Maas has created a brilliant high fantasy sequel that both YA and adult audiences could love.Throne of Glass is open-ended, and once I finished it, I was desperate to go out and buy the next book in the series, Crown of Midnight. No doubt I’ll be reviewing the entire series on this blog.