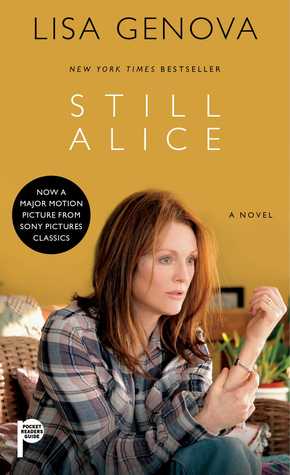 In Lisa Genova’s extraordinary New York Times bestselling novel, an accomplished professor diagnosed with Alzheimer’s disease learns that her worth is comprised of more than her ability to remember.

Alice Howland is proud of the life she worked so hard to build. At fifty years old she’s a cognitive psychology professor at Harvard and a world-renowned expert in linguistics with a successful husband and three grown children. When she becomes increasingly disoriented and forgetful, a tragic diagnosis changes her lifeand her relationship with her family and the world forever.

And yet another book comes along that I noticed because of a film adaptation. The cover (film tie in edition) is intriguing, and says enough about the nature and storyline of the book. The main character, Alice, develops early onset Alzheimer’s. The book is in third person, although it’s really told from Alice’s perspective. She realises there’s something wrong quite early on in the story – she forgets certain words in a lecture and forgets to meet people or attend a dinner. It’d be easy for her to brush this off as ‘getting older’ or ‘going through menopause’, but she pushes to find the answer to what’s happening to her, even though her husband refuses to believe it.

I have mixed opinions of her husband. You can tell he’s just as heartbroken with her diagnosis as she is, but he deals with it in what I’d say is the wrong way. He ignores it, and he pretends it’s not happening. He tries to move Alice to NY, even though that would be terrible for her Alzheimer’s. She’d be alone, and she’d be terrified and away from her children and future grandchildren. Throughout the book, the reader doubts his commitment to her – he comes across as selfish and conceited. But he does love her; he’s simply struggling to come to terms with her disease and how it’s affecting their family.

This book changes how you see Alzheimer’s. It can affect people as young as 40, and Alice is a 50 year old Harvard professor. She’s extremely intelligent, but her mind deteriorates. She can’t remember where she put her copy of Moby Dick, and then she finds it in the microwave. She keeps hearing the ‘beep beep’ of the telephone, only to realise it’s actually the microwave.

Her disease is horrible for her to come to terms with because she can’t do her job anymore, and then, as the disease gets worse, she sleeps all day and she can’t remember why she’s in the bathroom. She can’t remember where she is when she goes running, and she can’t even remember that she has children.
The ending to the novel is open-ended, but that’s what this disease is. It doesn’t end, and at the moment there’s no cure. This book highlights the tragic nature of Alzheimer’s, and how difficult it is not only for the person suffering from it but for their family as well.

Lisa Genova has done such a marvellous job at being subtle. You realise Alice’s pain without Alice telling you, or without her even realising it herself. She forgets things and she misses her lectures, and she never really realises, but you – as the reader – realise. And you feel for her. Warning: this novel might come with tears. Have tissues handy.