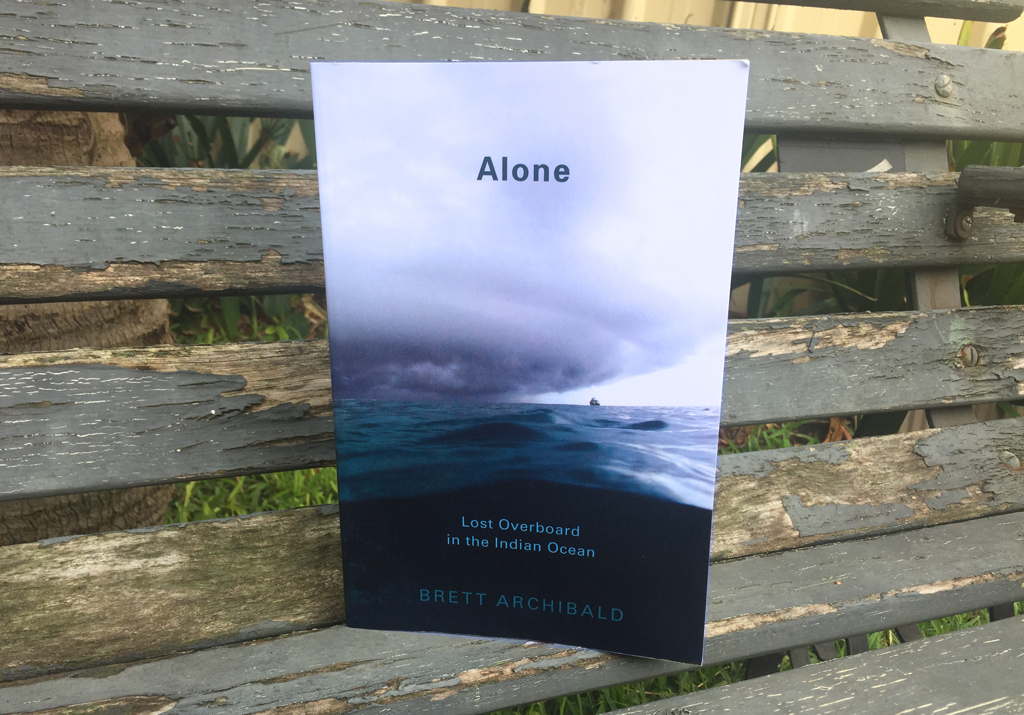 In April 2013, Brett Archibald – a South African man – fell overboard in a storm in remote Indonesian waters without anyone else realising. It was eight hours before his friends awoke to find him missing. And then a frantic search was underway. This book is a true story, but not written by Brett Archibald. As he admits to in the epilogue, he spent many mornings with a ghost writer revealed only as CB, who brought Brett’s story to life on paper.

Brett survived the 28.5 hour ordeal in the ocean, with no food and nothing to hold on to. He simply had to stay afloat and fight off the dangers that found him: sharks, jellyfish, rough sea and high waves.

I wasn’t aware of this story when I picked up the book. At the time, it caught worldwide attention, but I couldn’t recall the incident in my mind. But I was intrigued and very interested in reading Brett’s story. How did he manage to survive in the water that long?

“The boat begins to lose its shape in the blackness; the lights become increasingly dimmer, then they’re just a blur. I watch the boat go, a toy in the distance. It looks so vulnerable in the angry storm and yet it’s my retreating refuge.”

Alone alternates between Brett’s experiences in the water and his friends on the boat searching for him. It’s a clever way of adding more to the book, since I was curious as to how the ghost writer would manage to get 340 pages out of his story.

Brett’s story really is incredible. Even though he was a fit, healthy man, to stay alive in the water for that number of hours would be nearly impossible. He had nothing to hold on to and he had barely any water the entire time (only what drops he could catch in his mouth when it rained). He was stung by jellyfish, nudged by a shark, pecked by birds, and toppled by waves. And he couldn’t spot the boat at any time and had plenty of reasons to give in.

His journey was as much a mental one as a physical one. Brett often thought of his family back home and of his past decisions. The reader is thrust back into Brett’s earlier life many times throughout the book, allowing the reader to better understand him and who he is as a person. He is strong-willed and determined, and the reader sympathises with him. The reader feels sympathy towards his friends on the boat and his wife back home desperately praying for Brett to be found. There were many heroes among the rescue teams that found Brett.

“I wait, stunned, desperately treading water. My outstretched arms pull great circles in the swirling foam as I fight to take breaths between the waves. My soaked T-shirt, constricted across my chest, feels like it’s trying to suffocate me. I’m in the ocean, unwittingly abandoned.

Brett did have some luck on his side. The area of ocean that he was stranded in wasn’t commonly known to have many sharks, and he was close enough to land that – depending on the tides – could’ve drifted onto land at some point.

The writer does a great job of telling Brett’s story and weaving present and past intermittently. At times, though, the writing is jolted and jarred. Simple sentences and repetitive stylistic devices make the story drag and the reader becomes a little tired. Additionally, there are times in the story where Brett’s thoughts are repeated – his feelings towards his wife and his regret and guilt over past mistakes are looped repeatedly. Even though this is what he was thinking at the time, the story probably could’ve omitted the repetition for ease of reading. Alone probably could’ve been about 100 pages shorter, but it was still an interesting story and I wasn’t deterred from getting to the end.

For anyone who loves reading non-fiction, or inspirational stories of survival, then this is a book you’ll really enjoy. There is a lot to learn about surviving in the ocean for long periods of time, and this book does a great job of making the reader feel like they’re learning more than just Brett’s story – we learn a lot about the people in his life and those courageous friends and acquaintances who helped rescue him.