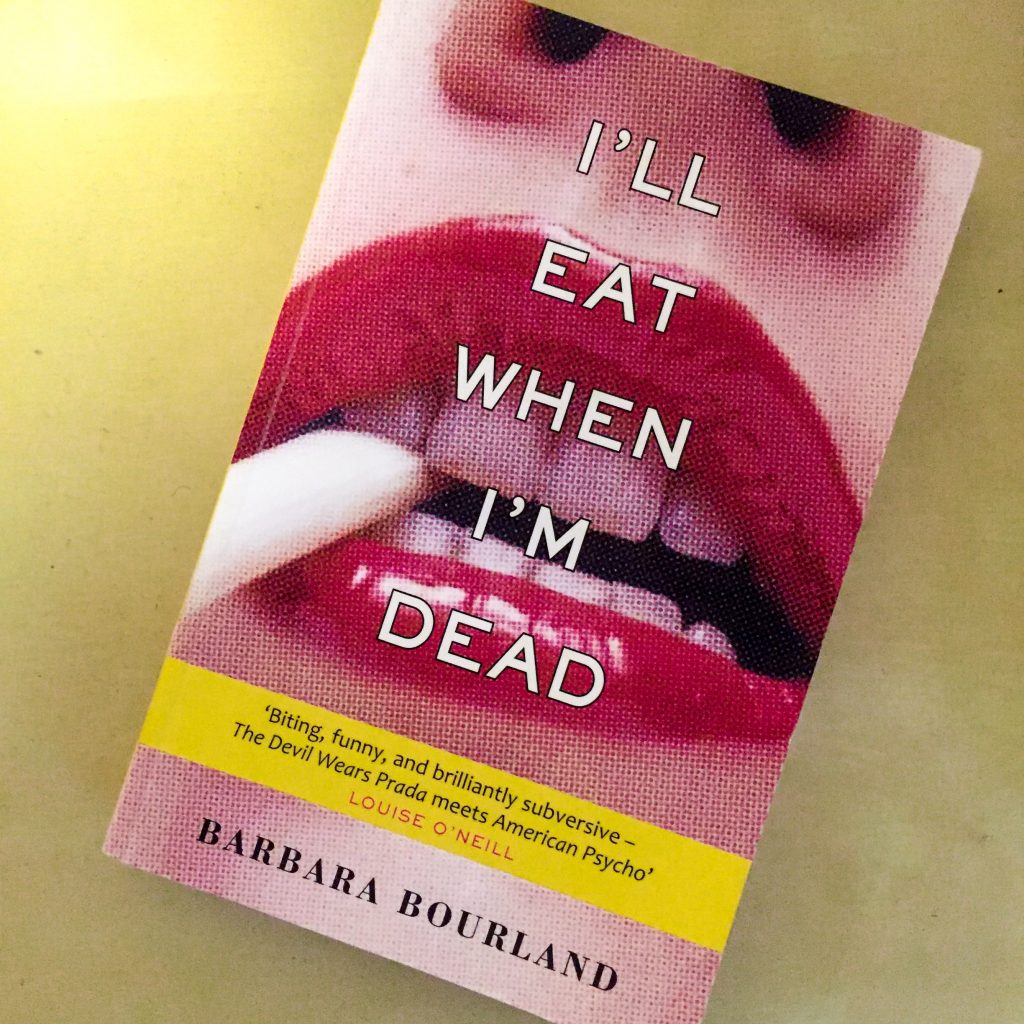 When stylish Hillary Whitney dies alone in a locked, windowless conference room at the offices of high-concept magazine RAGE Fashion Book, her death is initially ruled an unfortunate side effect of the unrelenting pressure to be thin.

But two months later, a cryptic note in her handwriting ends up in the office of the NYPD and the case is reopened, leading Det. Mark Hutton straight into the glamorous life of hardworking RAGE editor Catherine Ono, who insists on joining the investigation.

Surrounded by a supporting cast of party girls, Type A narcissists and half-dead socialites, Cat and her colleague Bess Bonner are determined to solve the case and achieve sartorial perfection. But their amateur detective work has disastrous results, and the two ingenues are caught in a web of drugs, sex, lies and moisturiser that changes their lives forever.

I’ll Eat When I’m Dead is The Devil Wears Prada meets Sex and the City meets an episode of Criminal Minds. With a murderous twist and mysterious clues abundant throughout the book, it’s hard not to get sucked into this story and these characters.

The book is really interesting for anyone who doesn’t work in the fashion industry (like me!). I’m sure there are lots of things about this book that are factually inaccurate but at the same time, we read it feeling like we’re gaining an insight into the glamorous world of elite fashion magazines. I imagine Calista Flockhart in the role of Catherine Ono — strong, determined, intelligent, but also gorgeous.

At 11:00am the editors of RAGE Fashion Book filed in and took their places around Margot’s office, each unfolding one of the custom camp stools that were stacked next to the door.
“We are losing our edge.”

I really love love loved this book — the murder mystery was intriguing enough to pull me in, but I stayed for the world that Barbara built. The glamour and the clothes and the characters were amazing and I absolutely devoured this book. Additionally, some parts of the novel are a rampant satire of the fashion industry. Detective Mark Hutton, an outsider, makes generalised comments about the RAGE work environment because of what he thinks it would be like, and he assumes Hillary Whitney died from anorexia when really there are clues to suggest that anorexia was not the cause of death.

“Every weekday morning, as the sun rose above Sixth Avenue, a peerless crop of women —frames poised, behaviour polished, networks connected, and bodies generally buffed to a high sheen — were herded by the cattle prod of their now ambition to on particular building.”

On some level, I think you have to have a particularly keen interest in fashion in order to enjoy this book as much as I did. I don’t work in the fashion industry, nor would I want to. I am also not a model. But there’s something about luxurious fashion magazines that I just love — the editorial layout, the women, the clothes and the feel of the whole thing. I become completely absorbed in that whole world. So for me, I loved reading I’ll Eat When I’m Dead because of my keen interest in where the book is set and all the glamorous women that drive the plot.

Cat is incredibly flawed but also incredibly beautiful (inside and out). She’s bold and brave but also intelligent and driven and passionate and as a reader I admired her.

“Cat’s makeup was indeed literally flawless, her face a perfect mask shellacked to require no photoshop. It was flawless every day now; Cooper sent hair and makeup artists any time she would be expected int eh office or at an event.”

Amongst other things, this book also highlights the reach of social media and how it is affecting print publications. RAGE isn’t doing as well because of their competitors, who happen to be run on an online platform by much younger people.

The murder of Hillary Whitney is the focal point of the novel, and we see this through the POV of Detective Mark Hutton. He’s cute and single, and instantly takes a liking to Catherine Ono. At the beginning, it’s clear that he’s out of his depth. He doesn’t understand the fashion world and he doesn’t understand the cryptic clues that seem to suggest that Hillary Whitney was murdered and didn’t die of her own accord.

“After helping Cat into her building, Hutton caught the train back to Manhattan…Her big brown eyes, both kind and sharp. He’d never met someone so…studied, who was also smart.”

Slowly, he learns to trust Catherine and let her help him solve the case because after all, she’s the one who is already inside that environment. She knows the comings and goings of RAGE and would be able to discover something ‘unusual’ far sooner than Mark could.

I’ll Eat When I’m Dead is about a murder, but it’s also about the fashion industry. It’s entertaining, fun, smart and sexy. I highly highly recommend it.

As Kirkus Reviews put it, death by beauty was never so much fun.

Thank you to the publisher for sending me this book in exchange for an honest review.