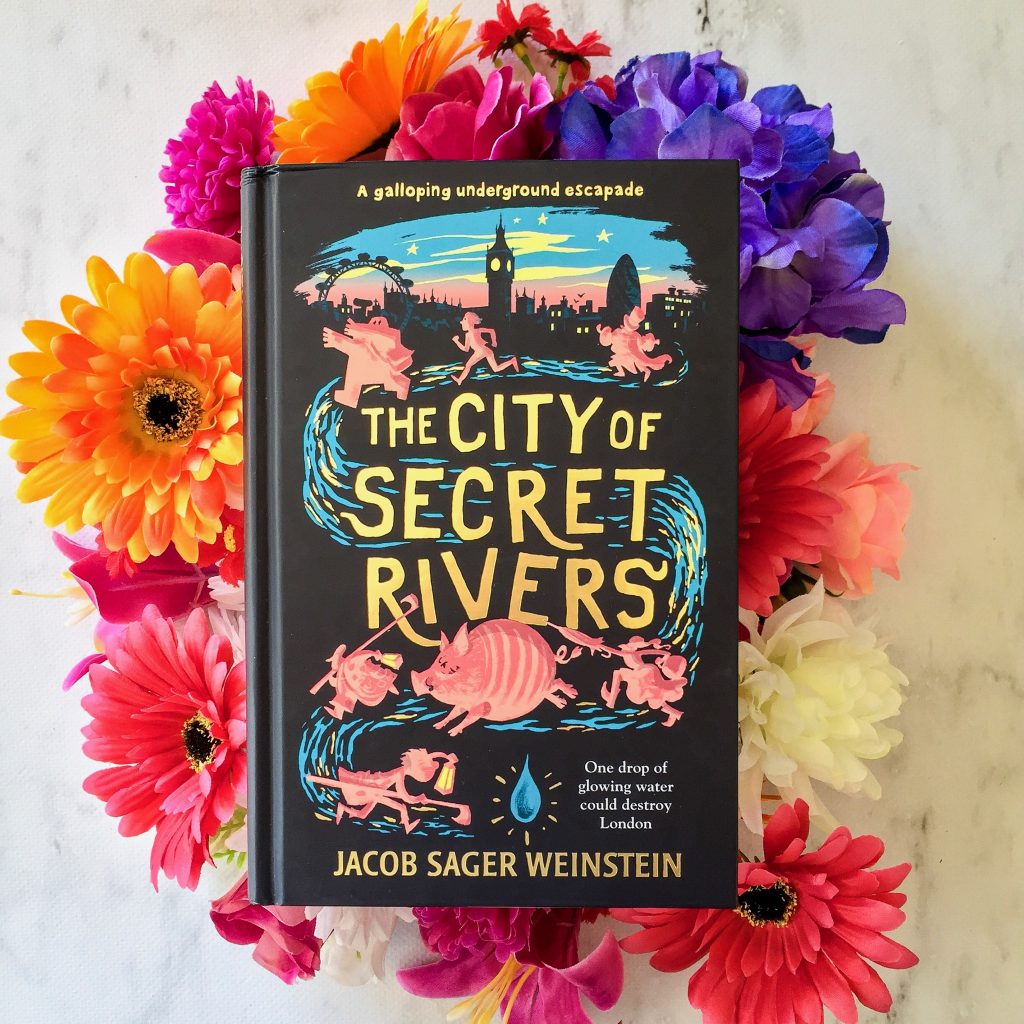 An exciting subterranean London adventure, the first in a middle-grade trilogy.

Hyacinth Hayward has recently arrived from America and is having difficulty adjusting to her new surroundings, especially being in the sole company of her eccentric mother. Everything feels strange. Very strange. And it gets stranger the day she accidentally unleashes the power of a secret river running through London. To prevent a second Great Fire, Hyacinth needs to retrieve a single, magically charged drop of water from somewhere in the city sewer system. Along the way she encounters an eclectic cast of characters – the shambling, monstrous Saltpetre Men who kidnap her mother, the Toshers who battle for control of magical artefacts and a giant pig with whom she has a tea party. The clock is ticking – will she figure out who to trust?

The City of Secret Rivers is fun to read, with mad cap adventures and a fast-paced invitation down into the depths of London’s underground rivers.

The author actually did a lot of research whilst writing this book, which he talks about in the Author’s Note. The book features a lot of illustrations throughout the pages, which I think kids would love.

“During the creepiest and most disgusting day of my entire life, I thought I had handled everything pretty calmly, all things considered. But now there were rats swarming over my body, and all I could do was shriek really intelligent things like ‘Aaaaaaaa’ or ‘GET OFF GET OFF GETOFFGETOFFGETOFF’
The rats didn’t listen.”

The protagonist is a sassy, fast-talking young girl who embarks on the crazy journey under London to save her mother.

This book is supposed to be for children aged 9-12 but I definitely feel like it wouldn’t be suitable for some kids who fall into that lower age bracket. Some of the things that happen in the book (one character tries to kill another by slitting their throat) seem a little too much for young children, and I thought those parts of the novel should’ve either been diluted or cut out completely. Additionally, I feel like children’s novels should contain character names that are easy to pronounce. I’m an adult and I have absolutely no idea how to pronounce Hyacinth or Oaroboarus. Surely kids might struggle as well?

I think children who are avid readers will love this book, because they’ll stick with it to find out what happens to Hyacinth’s mother. But for children who struggle with reading, I don’t think this is the book to give them.

“I had never really thought much about what kind of spiral staircase I prefer, but as we got higher and higher, I started thinking about it more and more. Some spiral staircases have walls on both sides. Those, I decided, are the right kind.”

I felt like this story was too chaotic — too disjointed and fast-paced. I understand some kids might find this exciting, but so much was happening that I couldn’t quite take the time to understand or appreciate the characters. Everything was moving so fast and there were so many things being thrown at the reader in each chapter, that I felt a little lost throughout the book and the characters weren’t really that memorable. I got the end of the book and most of the plot was lost on me, and I didn’t feel overly attached to any of the main characters.

I think Jacob Weinstein has done a good job of bringing together a unique storyline, I just wish he’d taken out some of the ‘twists’ and ‘adventures’ and filled the book with more characterisation and depth.