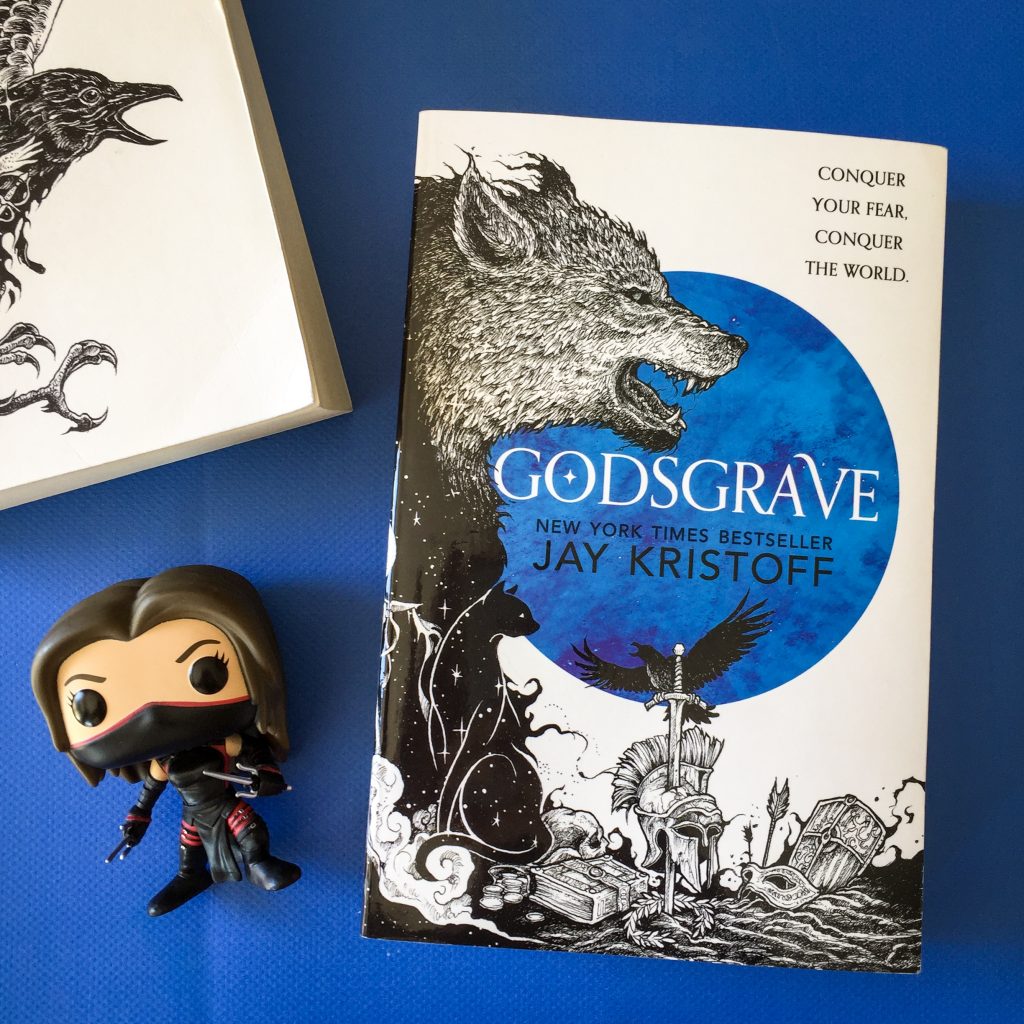 Godsgrave is the second book in the Nevernight Chronicles, an epic fantasy series about a young assassin and her desire for revenge. She deliberately sells her freedom so that she can compete in the gladiatorial games and kill the two men who were responsible for her father’s death — Scaevo and Duomo.

I’ve just realised that despite having read Nevernight (book one in the series), I haven’t yet reviewed it for this blog. SO after this I’ll be returning to where it all began so I can provide a review for the beginning of the Chronicles. If any of you haven’t yet started this series, don’t read my review of Godsgrave — too many spoilers! And believe me, this is not the kind of book you want spoiled. Jay Kristoff is the master of unexpected twists and turns and leaving the reader feeling like they had absolutely no idea what was coming. He leaves the reader in shock, awe, surprise, and at times devastation (he doesn’t shy away from killing beloved characters).

“Pig’s blood has a very peculiar taste. The blood of a man is best drunk warm, and leaves a hint of sodium and rust clinging to the teeth. Horse’s blood is less salty, with an odd bitterness almost like dark chocolate. But pig’s blood has an almost buttery quality, like oysters and oiled iron, slipping down your throat and leaving a greasy tang in its wake.”

The second book in a fantasy series usually falls victim to ‘second book syndrome’, where the plot is really just the characters plodding along and devising action and being mad about whatever revenge they need to get. Really, book two is just the characters getting from point A (the origin of the story in book one) to point B (the amazing showdown that occurs in book three).

However, Godsgrave is a marvellous sequel. It furthers the plot, which is what a sequel is supposed to do. We’re supposed to feel like there’s a mini story in each book of a series, and Jay Kristoff definitely delivered. All of the characters are three dimensional and you are really draw into each of their struggles. I wouldn’t be friends with some of them if I met them in real life, but I loved reading about them and I sympathised for them in the book.

“How did you come here?” she asked, looking at the track about them, the silhouette of Crow’s Nest in the distance. “This place?”
Bryn sniffed. “Bad harvest. Three years back. Village didn’t have the grain to pay our tithe to the Itreyan administratii. They locked our laird in irons, had him and his whole familia flogged in the stocks.”
“We didn’t like that,” Byern explained. “Me and Bryn were too young for our da to let us go, but anyone big enough to swing a sword march ed up to the magistrate’s door. Dragged him down to the stocks and gave him a flogging right back.”

Additionally, we come to understand more about Mia in Godsgrave. She is the orphaned daughter of an executed traitor. She wants revenge. Besides being an amazing swordsman (or swordswoman!), she’s ruthless, clever, intelligent and devious. At times she seems unfeeling, but she’s also inquisitive and trusting and funny. She develops a relationship with a female character (no spoilers as to who it is!) and we learn a different side to Mia. There’s more of Mia’s feelings and doubts written into this book. She starts to feel more relatable in Godsgrave compared to Nevernight. I finished the book feeling like I knew her better — her desires and motives. She struggles to embrace her darkin side and what it means to be darkin, especially after she meets another character in the book who is also darkin. I think that Mia’s darken side will be further developed in the next Nevernight Chronicles book.

What is my name?
“CROWCROWCROWCROW!”
Dark delight in her belly.
Warm blood on her hands.

Godsgrave is more brutal than Nevernight, upping the violence, fighting and death and describing it in more detail. The sex scenes in the book are also longer and described in more detail, and Jay writes these with sensitivity and understanding (for a man, he actually writes F/F sex scenes rather well). Once Mia is inside the gladiatorial collegium and fighting for her life amongst other warriors, she soon learns that what she thought was real might not be. Who she trusted might have betrayed her and she may need to realign her allegiances.

“Who’s Arkades?”
“The Red Lion, they called him,” Mia said.
“…Executus used to be a slave like us?” Matteo asked.
“Not like you, you worthless shit,” Butcher snarled. “He was fucking gladiatii.”
“Victor of the Venatus Magni ten years back.” Mia spoke softly, voice hushed with awe. “The Ultima was a free-for-all. Every gladiator who’d been signed up for the games was released onto the sand for that final match. One warrior sent out every minute until the killing was done. Must’ve been almost two hundred.”
“Two hundred and forty-three.” Butcher said.

I have to give a shout out to Jay for the ‘refresher’ at the beginning of the book. Normally, fantasy books just dive straight into the plot and it’s usually been at least a year since the last book and so I have no idea what’s happened. But there’s a few pages at the beginning of Godsgrave that list all of the characters and what happened to them in the first book. It was amazing. I didn’t have time to go back and reread Nevernight so I LOVED that I could read a recap in three pages. Thank you Jay!

A rather entertaining part of the novel is Mister Kindly. He’s a shadow who wears the shape of cat (although he is not really a cat at all) and he accompanies Mia on her journey. He lives by eating her terror. Some may think of this as a bad thing, but Mister Kindly allows Mia to be fearless. He takes away her fear and she is free to be her usual, badass self. As a result, she ventures head first into danger with no thought about her own safety. Luckily for her, she’s skilled enough to survive.

And of course, Jay Kristoff again provides hilarious footnotes throughout the book that not only provide backstory to the plot but also witty aside. In my opinion, they are optional. You don’t need to read them to understand the plot of the book but they are a fun, snarky aside to read throughout.

This book is an emotional rollercoaster. The stakes are higher and the pace moves faster and faster until you can’t put the book down and you’re desperate to get to the end. Just like in Nevernight, Mia has to go through trials and tests to come out as victor. But in Godsgrave, there’s more at risk. She needs to win. And win she will.

I recommend this to adult readers, because of the content. This is NOT a YA book. Most people would know this if they’ve read Nevernight, but I’ll repeat: this is not a YA book. It is a novel for adults. I also recommend this to lovers of fantasy. It’s an amazing series and I can’t wait to read the next book in 2018.