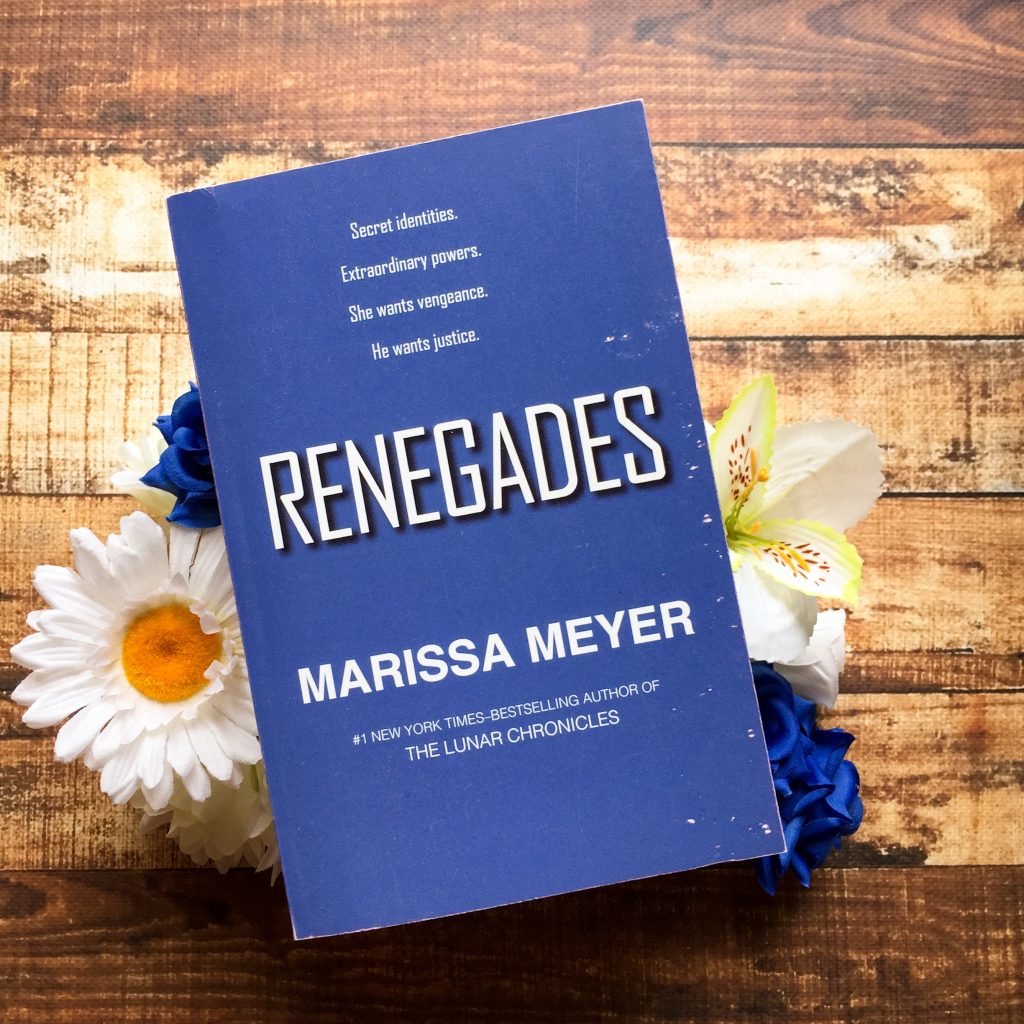 The Renegades are a syndicate of prodigies—humans with extraordinary abilities—who emerged from the ruins of a crumbled society and established peace and order where chaos reigned. As champions of justice, they remain a symbol of hope and courage to everyone…except the villains they once overthrew.

Nova has a reason to hate the Renegades, and she is on a mission for vengeance. As she gets closer to her target, she meets Adrian, a Renegade boy who believes in justice—and in Nova. But Nova’s allegiance is to a villain who has the power to end them both.

Renegades by Marissa Meyer is a young adult fantasy novel with a large cast of characters and a long array of special abilities.

Nova’s parents and infant sister are murdered when she is six years old. She is unharmed, but she blames the Renegades — superheroes who protect their city — because they were supposed to protect her family and they failed to save them in time.

Fast forward ten years later, and Nova is planning to infiltrate the Renegades and enact revenge on them for failing her family all those years ago.

“One cannot be brave who has no fear.”

Nova’s power is that she can induce sleep merely by touching someone. She’s also an insomniac, and is incredible at combat and defence. She’s confident, fit and self-assured, and she’s a fantastic protagonist who really drives the story forward and keeps the reader engaged.

“The Renegades cared about finding the best prodigies to make their organisation stronger, smarter, better. If she got in, all she would have to do was persuade them that she was worth keeping, and no one would care about her past or her connections. They wouldn’t think to dig any deeper until it was too late.”

The world building is really detailed and believable, and the combat scenes are described well enough to be easily followed, but not too much so that the reader feels like they’re reading a movie script. This book would definitely translate really well on the big screen, but it’s also a really fun book and Marissa Meyer has done a really great job of alternating the intimate third person point of view between Nova and Adrian (a Renegade).

Nova and Adrian are both hiding something from their teammates, and after a while the reader wonders how those kids are so foolish that they haven’t picked up on it yet. It’s so obvious that Nova isn’t on their side, and it’s so incredibly apparent that Adrian is actually Sentinel (his alter ego). At times, I actually cringed with how awkward their cover ups were.

“Nova turned her wrist from side to side, feeling the start of a grin. New tech, a new gadget. Finally, they were speaking her language. But then, a thought occurred to her that smothered that first twinge of excitement. Technology like that had to include a tracking device. Which meant, so long as she wore it, the Renegades would know just where to find her.”

When I think about this book, I realise that not a lot actually happened in it. There was only one ‘mission’ and it was for the characters to surveillance a library. Sure, things go wrong, but at the end of the day, this book is certainly more character driven and more ‘world building’ than it is actual plot. And considering that the book is almost 600 pages, I am really surprised by that.

Additionally, it was super difficult to keep up with all the different characters mentioned and their abilities. It took me a good 50 pages to grasp the world and who was good and who was bad, and how their stories correlated.

In saying that, I loved this book. I kept reading because I wanted to find out what happened, and despite the fact that there wasn’t much plot, I still really enjoyed the novel. My hypothesis is that book 2 is going to be much more action-packed than Renegades is, and and that’s okay. I’m happy to stick around if it means I’m set up for book 2.

I recommend this to comic book fans and people who love superhero movies. This has a very ‘superhero movie’ feel to it, with unique abilities and fun characters and a really great world.