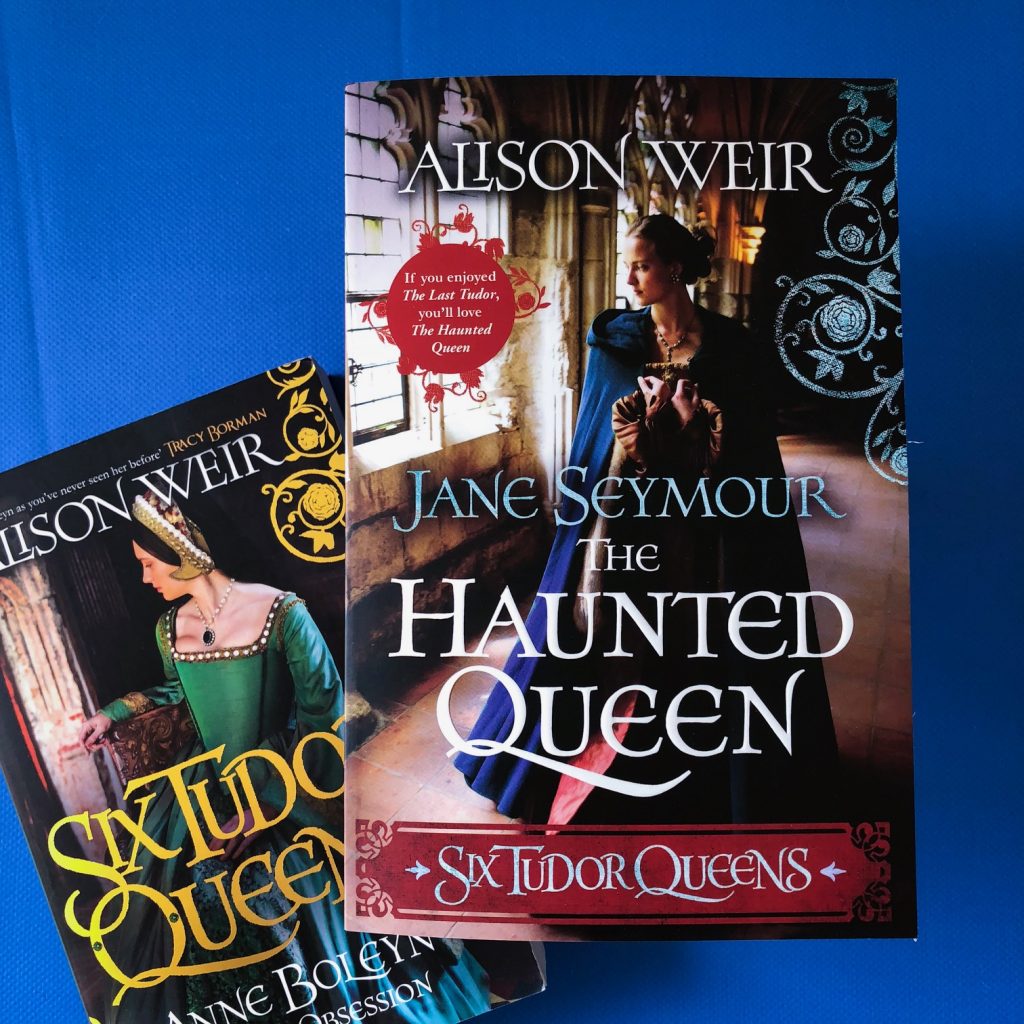 Eleven days after the death of Anne Boleyn, Jane is dressing for her wedding to the King.
She has witnessed at first hand how courtly play can quickly turn to danger and knows she must bear a son . . . or face ruin.

This new queen must therefore step out from the shadows cast by Katherine and Anne – in doing so, can she expose a gentler side to the brutal King?

JANE SEYMOUR
THE THIRD OF HENRY’S QUEENS
HER STORY

Acclaimed, bestselling historian Alison Weir draws on new research for her captivating novel, which paints a compelling portrait of Jane and casts fresh light on both traditional and modern perceptions of her. Jane was driven by the strength of her faith and a belief that she might do some good in a wicked world.

History tells us how she died.
This spellbinding novel explores the life she lived.

The Haunted Queen by Alison Weir is the third volume in her six-part series about the wives of Henry VIII. Each novel focuses solely on one of Henry’s wives and their short-lived, unfortunate reign. The first two novels are Katherine of Aragon: The True Queen, and Anne Boleyn: A King’s Obsession.

Jane Seymour held a brief reign over England; she died after giving birth to her son and Henry’s first male heir. But very few of us are taught about Jane’s life and who she really was. The Haunted Queen introduces us to Jane’s family and her quick path to being Queen. We learn her fears, doubts, concerns and her presence within the Court.

Alison brings to life a very compassionate, empathetic Jane Seymour. She’s devoted to her family and her values, originally desperate to be a nun.

After a brief time, she changes her mind and leaves home to be a maid of honour to Katherine of Aragon, who is the Queen at the time.

“Jane took her place with the other maids-of-honour, her heart racing. The previous evening, when she had learned what would be required of her this day, she had gone to the chaplain who usually shrove her, and blurted out, under the seal of the confessional, all her fears.”

Jane has a unique vantage point from this role. She witnesses Henry’s affair and Katherine’s demise. She grows very fond of Katherine, and is horrified by the controversial rise (and downfall) of Anne Boleyn.

If you’ve read the first two volumes in the series, then a lot of the events in this book will seem repetitive. It’s the same information, just told from a different perspective.

It’s actually really interesting going from Anne Boleyn’s volume (where you come to understand her determination and her drive) to Jane Seymour’s volume. You view Anne from an outsider’s perspective, and you find yourself quite repulsed by her behaviour and how she manipulated Henry VIII.

Despite knowing that Jane will eventually die, I enjoyed reading about her time with Henry. He seems overcome with happiness, love and joy for the entirety of their time together.

As a result, we sympathise for Jane and her young child and we are left wondering how events would’ve played out if she had’ve lived.

“After he had gone, Jane was in turmoil. Part of her felt horror at this affair of the Queen; another rejoiced at the deepening understanding between herself and Henry. It gave her hope that when the time came – if it came – she might be able to plead for mercy for Anne. Hate her she might, but she could not have her blood on her conscience.”

Like all novels exploring this period, it’s hard to determine fact from fiction, but Alison Weir researches her subjects meticulously and illustrates them in such a realistic, relatable manner. I’m so excited to read the rest of this series, and I recommend these books to anyone with interest in this era and these wives.