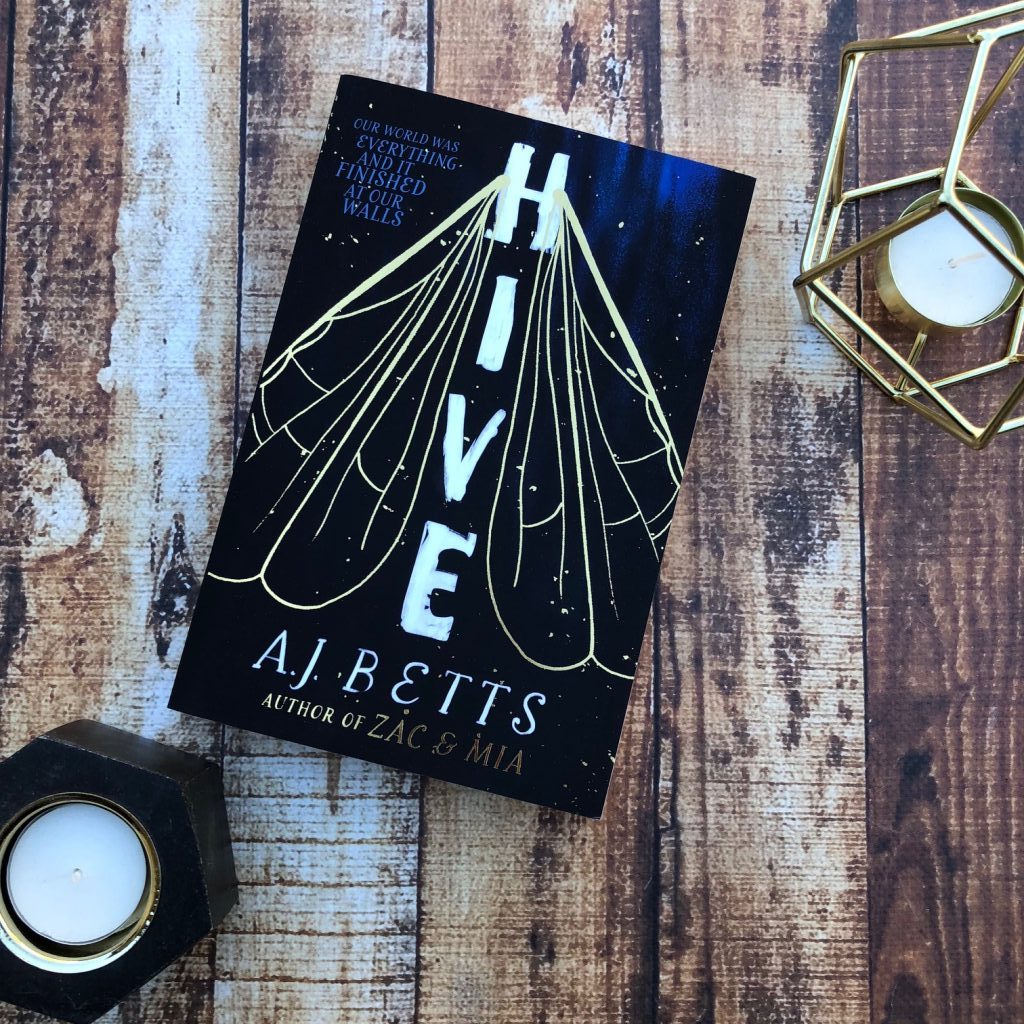 All I can tell you is what I remember, in the words that I have.

Hayley tends to her bees and follows the rules in the only world she has ever known.
Until she witnesses the impossible: a drip from the ceiling.

A drip? It doesn’t make sense.

Yet she hears it, catches it. Tastes it.

Curiosity is a hook.

What starts as a drip leads to a lie, a death, a boy, a beast, and too many awful questions.

Hive by AJ Betts is the first novel in a two-book dystopian series. The story takes place in a claustrophobic, confined setting — a small, strict community encased within walls.

Hayley is governed by the society she was born into. It’s all she’s known. Everyone has a purpose — a role — but Hayley starts to question hers when she discovers a drip from the ceiling.

It’s water. But that doesn’t make sense. What she’s discovered doesn’t align with what she’s been taught. That’s not where water is supposed to come from. Is it?

“With a thud, the buzzing stopped. It was Geoffrey who’d done it, his palm flat against the wall. He shouldn’t have killed the bee, but I didn’t care — there were plenty of others and, besides, it was further proof that I’d indeed come here chasing a rogue.”

Hive is a refreshing addition to dystopian fiction — a unique plot and premise, and a heavily character-driven story. The setting is eerie and creepy. The novel explores curiosity and intrigue, but also a young girl’s determination to be something other than what she’s been told she needs to be.

The book ends on a cliffhanger, unsurprisingly. I wonder if this story should’ve just been one book with two parts, rather than a two-book series. This is a pretty slim book with a slow plot, and if book two is the same then I think it would’ve served a better purpose to combine the stories.

I’m not that good at keeping up with sequels because there’s often quite a bit of time between books, so if it’s not a trilogy, and the two books are really small, why not combine?

“I checked the commons again, this time looking for other absences. On the stairs that skirted up around the commons stood members of the council, but fewer than there should have been. The judge wasn’t among them. Nor was her son.”

A.J Betts’ writing is detailed, descriptive but also really evocative. She has a real talent with words, and crafting effortless prose that just flows.

The novel does have dark elements, exploring a woman’s role to conceive children so that the society can keep growing. Hive reminded me of The Handmaid’s Tale in many ways.

The protagonist, Hayley, is inquisitive and wide-eyed. She’s innocent, but she’s also smart. She knows it’s not safe to express her curiosities to other people in the community. They won’t believe her. They’ll think she’s ‘mad’ and mentally unstable. So, she spends her time solo — searching and trying to confirm her suspicions about where she’s been living her whole life.

With poetic writing and an intriguing plot, Hive will appeal to all readers. It asks many questions about what it means to alive.