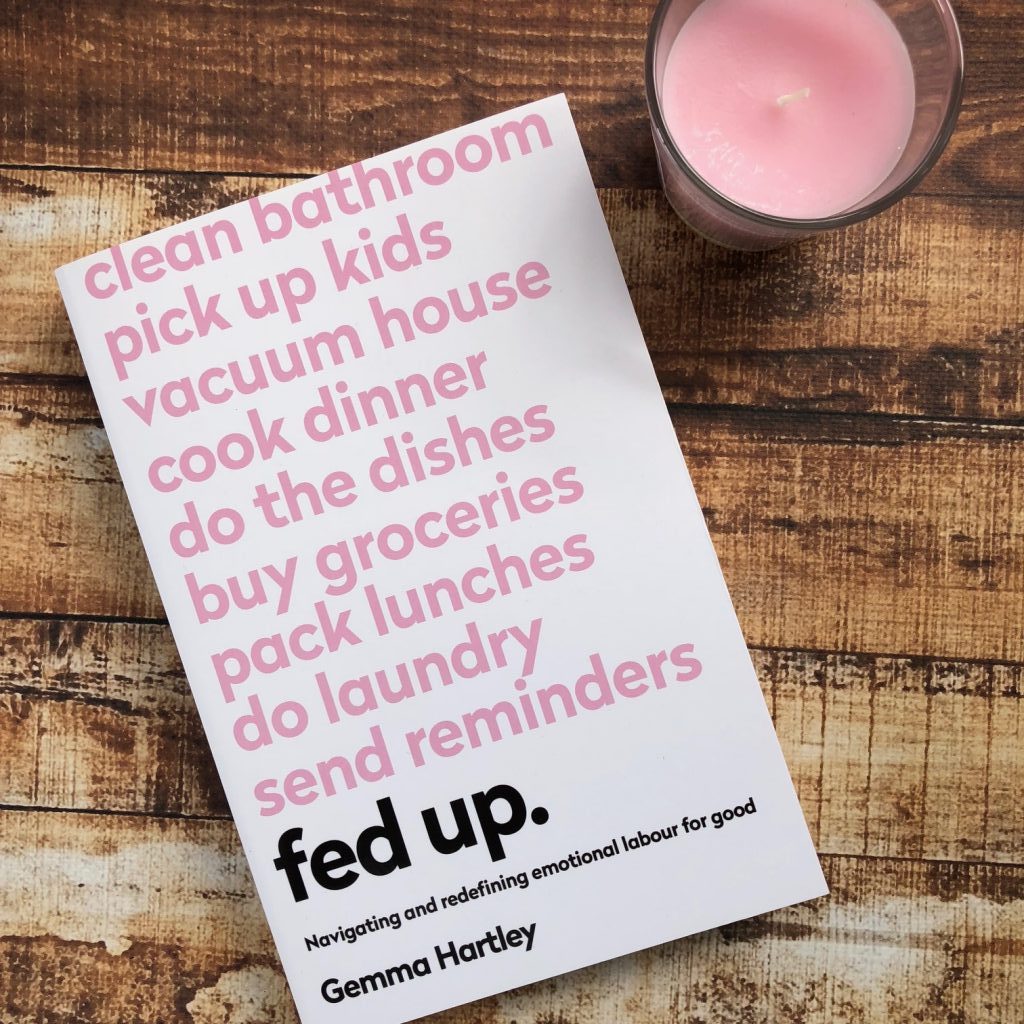 Gemma Hartley wrote an article in Harper’s Bazaar in September 2017 called ‘Women Aren’t Nags – We’re Just Fed Up’, which instantly went viral. The piece, and this book, is about ’emotional labour’, i.e. the unpaid, often unnoticed work, done by women, that goes into keeping everyone comfortable and happy.

FED UP tackles the hard-hitting issues surrounding emotional labour: the historical underpinnings and roots in feminism, the benefits and burdens of this kind of effort, and the specific contexts where emotional labour, otherwise known as the ‘mental load’, plays a major but undervalued role, including relationships, work, sex, parenting, politics and self-care.

Dubbed as the next feminist frontier, emotional labour couldn’t be more relevant to these times we’re living in. Fed Up is a must-read for those who want to harness the power of emotional labour and create a more connected, equal world.

Fed Up by Gemma Hartley is a feminist memoir and critical analysis around the concept of ‘emotional labour’. This is a truly fascinating read and I’m now going to thrust this book into the hands of every female friend.

Gemma explores the imbalance in relationships regarding ‘emotional’ tasks. This is usually things that people, or partners, don’t ‘see’. This may be remembering to buy a gift for a family member, remembering to book a doctors appointment or keeping a calendar of upcoming commitments for the whole family.

This kind of organisational activity is often performed by the woman in a relationship, whereas a man justifies ‘work’ as physical things that people can see, like mowing the lawn, walking the dog, fixing the car.

They often don’t understand the extra work that a woman performs to keep the house tidy, the kids behaving, or the friendships maintained. And then when the woman complains, she might find it hard to really explain what she means and then her partner is confused and perhaps frustrated.

I’ve certainly heard a lot of my female friends complain about their partner’s lack of help around the house or the family, and after reading this book I’ve realised it’s because they’re performing all the emotional labour and they feel unsupported by their partners.

Fed Up is engaging and exploratory, inviting discussion and deep reflection around gender imbalance in relationships and domestic responsibilities.

I was initially drawn to this book not because I share the same experiences as Gemma, but because I read — and loved — her Harpers Bazaar piece and thought this would be a well researched, well-written piece. And I wasn’t wrong.

Gemma has done so much research ahead of writing this book. She interviews many woman in relationships who lead different kinds of lives, and statistics are scattered throughout the chapters to help prove a point.

“The movies focus on the sweeping proposals and fairy-tale weddings, but what they don’t show is what ‘happily ever after’ actually looks like. We are presented with the beginning of a relationship, or else an act of emotional labour serves as a second chance, a promise for the future. The movies show us that the beginning of love requires an investment of emotional labour on the man’s behalf. Sometimes we get that in real life, albeit on a smaller scale. Sometimes we don’t.”

Gemma does indeed explore this in the novel, interviewing same sex couples and uncovering the balance of emotional labour in each relationship and analysing how that balance affects each person.

“Women’s experience with emotional labor makes them adept problem solvers. We are trained to always look at all of the different parts that are in motion and then carefully consider the choices that will put us, an those around us, in the most advantageous position.”

A few times in the book I felt like Gemma was repeating herself, but it was only occasionally done and it helped her reiterate a point she’d made earlier in the book.

I like that Gemma gives many examples from her own relationship and family and that of her friends and interviewees. This helps balance out the statistics and factual evidence in the book so as to not bog down the reader.

This is an eye-opening, fascinating read. Female readers — and any person who acknowledges that they’re performing most of the ‘emotional labour’ in their relationship — will love this book.