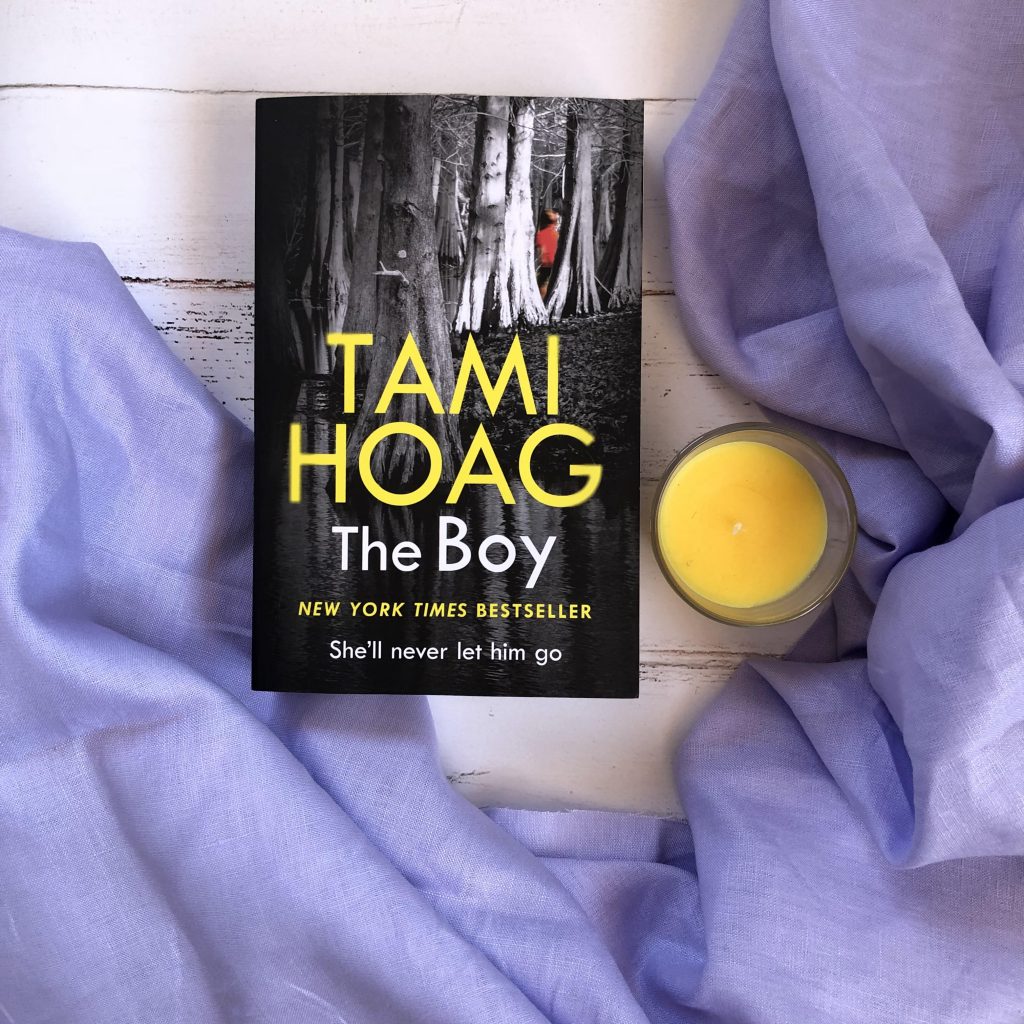 In the sleepy Lousiana town of Bayou Breaux, a mother runs to her neighbour – bloody and hysterical. The police arrive to find Genevieve Gauthier cradling her seven-year-old son in her arms as he bleeds to death.

Detective Nick Fourcade finds no evidence of a break-in. His partner Detective Annie Broussard is troubled by parts of Genevieve’s story that don’t make sense. Twenty four hours later teenager Nora Florette is reported missing. Local parents fear a maniac is preying on their children, and demand answers from the police.

Fourcade and Broussard discover something shocking about Genevieve’s past. She is both victim and the accused; a grieving mother and a woman with a deadly secret. Could she have something to do with the disappearance of teenager Nora Florette?

A unbearable loss or an unthinkable crime? Number One New York Times bestselling author Tami Hoag keeps you guessing in her most gripping thriller yet.

The Boy by Tami Hoag is a crime thriller set in a small town in the United States; the book follows the investigation of the brutal murder of a young boy, KJ, and the disappearance of the boy’s teenage babysitter, Nora.

The book is set in the Cajun country in Louisiana, and Tami encapsulates the setting perfectly. You can picture the small town easily, with the distinct class systems and the gossip and the hidden secrets behind closed doors.

The Boy works really well as a standalone novel, with only a few brief mentions to previous cases and enough information that you can follow along easily.

“The house looked even worse on television than it did in real life. People would watch this and think she lived in a dump — because she did. They would have no way of knowing it was only temporary, that as soon as Jeff was able to give her an office job and she had managed to scape together enough for a deposit and first month’s rent, she planned to move someplace better.”

The plot is twisted and full of mysteries, with fully fleshed characters and plenty of secrets. Nick is a very unpredictable man, with a lot of anger simmering beneath the surface. He’s snappy and unable to keep his opinion to himself.

His wife Annie is warm and comforting and is a much more approachable character. She helps calm her husband down, trying to make him see reason so that he doesn’t piss off the wrong person and get himself fired. Their dynamic works really well, and I thought they were both great protagonists.

I certainly didn’t see the ending coming, and all my guesses were wrong. I ploughed through this book so fast, completely enraptured by the mysteries of this small town.

The Boy switches between character POV, allowing the reader to find out different information about the victims. Slowly, information is revealed and you can start to form your own opinions about who killed KJ and where Nora has disappeared to.

Tensions builds throughout the whole novel, delivering the reader to a really intense finale. The ending is as satisfying as the lead up.

“As he rose, he reached out and gently touched her uninjured shoulder in a gesture of sympathy and reassurance. She seemed as slight as a bird. It was hard to imagine her fighting off an armed assailant, but people often found physical strength beyond imagining when faced with the choice of life or death.”

The book touches on many societal issues that people will recognise — bullying, suicide and class. Nora is from a poor family that have a very unconventional home life. Her single mother never really knows where Nora is, nor her other children. She cares about her children and she loves them, but isn’t able to always be there for them or support them in the way that they need. They’re left to their own devices a lot, and they’re really irresponsible. Nora’s brother Dean is a bully and really abusive, and a couple of Nora’s sisters are young single mothers who are also struggling.

Most of the people in the town judge them and shun them and refuse to let their children hang around the Florette family. A lot of people also judge KJ’s mum Genevieve because she’s a single mum and she’s poor and living in a rundown rental property.

“Still young enough to be momentarily intimidated by authority, the boy’s expression sobered as Annie walked up to him with her hands jammed on her hips. He was about the same size as her, she thought, and he was still more little boy than young man.”

In the first 100 pages or so, the dialogue between the detectives — in particular, Detective Nick Fourcade — was very cliche and over the top. It was antagonistic and actually made me cringe on many occasions. This seemed to mellow out as the book progressed, though.

Something else I disliked about the book was the unrealistic, overly sensitive inner monologue that both Nick and Annie shared. Sometimes their inner dialogue — in particular when they were thinking about how much they loved the son — read identical, like they were the same character. This was a point in the novel where I felt like the author’s voice, and her own feelings towards her family members and how she’d feel if anything happened to them, was coming through the page. The lovey-dovey thoughts of Annie and Nick actually made me cringe and roll my eyes, and it really jolted against the pacing of the book.

A fast-paced thriller novel with more than one mystery to solve, crime readers will be turning the pages desperate to find out the ending.