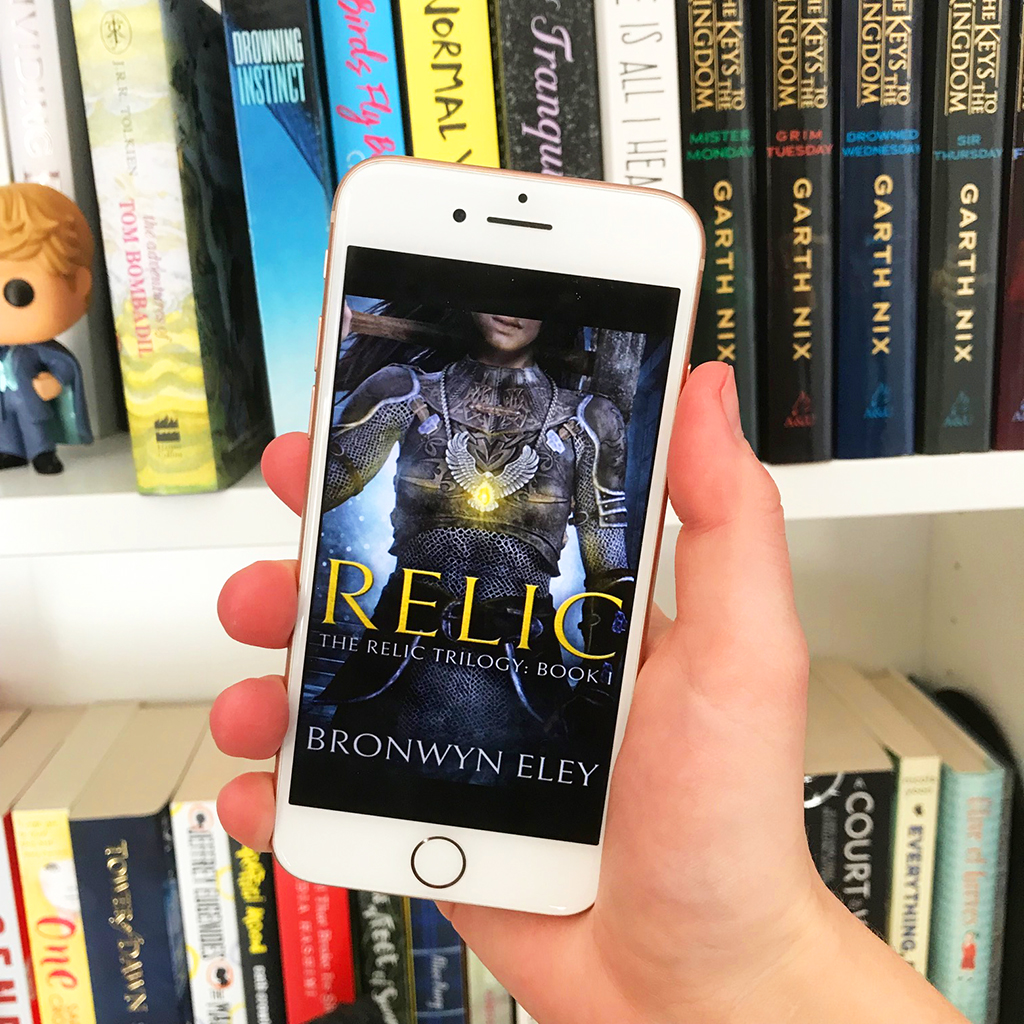 In the city of Edriast, there is no deadlier duty than to serve as the Shadow.

As the personal servant of the powerful Lord Rennard, the Shadow’s life is all but forfeit. Rennard possesses one of five rare and dangerous Relics – a jewel that protects his bloodline, but slowly poisons everyone else in its proximity. When the current Shadow succumbs to its magic, nineteen-year-old blacksmith Kaylan is summoned to take his place.
It’s an appointment that will kill her.

As the time Kaylan has left ebbs away, hope begins to fade… That is, until she discovers a plot to destroy all five bloodlines in possession of the Relics.

A rebel force plans to put an end to Rennard’s rule and Kaylan suddenly finds herself embroiled in a cause that might just be worth fighting for.  But no cause is without its costs…

As her life hangs in the balance and rebellion bears down on Edriast, Kaylan must decide where her loyalties lie – and how she’ll leave her mark on the world.

Relic by Bronwyn Eley is the first novel in the dark YA fantasy series, The Relic Trilogy. Set in the fictional city of Edriast, teenager Kaylan is selected as the new Shadow — a cursed role serving Lord Rennard, that guarantees imminent death.

Bronwyn’s debut novel is an enjoyable read. I enjoyed the premise, and the characters, and the pacing. At times, I felt the stakes weren’t that high but I still think fantasy readers will be entertained by this debut story. The relationship between Lord + Shadow is an interesting one, and certainly something that readers will be intrigued to find out more about.

“I flinched when Lirr’s hand rested on my lower back, firmly pressed against me as I tried to back away from his approach. I didn’t look at her, though, keeping my focus on Rennard. When he stopped, he was so close I could smell the heavy wine on his breath, so strong it was as if the fumes were pouring out of his skin.”

Friendships and alliances are a strong element in this book. Kaylan forms connections with a few other people whilst living as the Shadow, including Lord Rennard’s wife Jesper, and the delightful Markus.

Family is also a strong element in this book. Kaylan is really close with her family, particularly her siblings. It pains her to leave them behind when she is chosen as the new Shadow and she does her best to try and reconnect with them and check in on them after she’s left. It’s a heartwarming element to the story.

A few of the characters didn’t feel like they were fully fleshed out — Lord Rennard is an interesting character, although I didn’t feel like he was as three-dimensional as he could’ve been. I imagine we’ll come to know more about him and his motivations as we progress through the series. Additionally, Bellamy is a character we only hear about from other people. We don’t fully understand his intentions — good or bad — but I imagine this is setting things up for the sequel.

“Pride flourished in my chest briefly, suddenly replaced by a dark knot. In doing my job, I was helping Lord Rennard get one step closer to Bellamy. And what did I know about him? Nothing. Lord Rennard had put me in the middle of a dance without me knowing any of the steps.”

Kaylan is a relatable character that readers will sympathise for and empathise with. She’s a likeable character — a young girl who has been thrust into an unfortunate situation that she can’t do anything about. And it has a huge ripple effect on the rest of her family and friends.

At times, we’re dealing with an unreliable narrator and that’s always a welcome and enjoyable element in the fantasy genre. Over time, Kaylan’s mind falls victim to being Shadow and Kaylan can’t tell what’s real and what’s not. As a result, sometimes the reader is in the dark about the events in the book. This helps build the tension in the story,

“Better to come clean now, tell him why I wouldn’t be attending the celebration as a guest. Remove that look from his eyes. Quell any hopes of dancing under the stars with me. It couldn’t happen. And yet, I couldn’t stand the idea of those eyes turning cold and sorry.”

The world-building feels a little underdeveloped, and the plot points a little similar to many other fantasy novels. And the pacing is a bit slow in parts. But, the story kept my attention and the characters are interesting and I think YA readers will be entertained by this debut.

Rebellion is mentioned a lot in this book, but we don’t ever get to see any acts of rebellion. I look forward to the next book in the series, where the tension between Bellamy and Lord Rennard will no doubt reach boiling point.

Recommended for teenage readers and fans of fantasy novels. 12+ 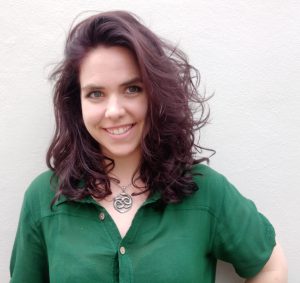 How do you juggle full-time work and writing?
Quite easily, honestly! I actually have three jobs (including my authoring) – my full-time work at Booktopia and I’m also a barista on Sundays at a cafe. Basically, I leave work and go to sport and then sit my butt down in front of the computer with some yummy snacks and beautiful instrumental music and just write! I always write after work and on the weekends, never in the morning before work. I don’t know how people do that – I like sleeping!

What skills from the military helped you write fantasy?
I’m not sure if my skills from the military helped write fantasy specifically but it helped writing in general. This is because I am a much harder worker now than I used to be. Being in the military got me to used long working days and that’s what writing with a full-time job is! It also showed me that I can do and be a lot more than I think. It made me believe in myself, so if I’m ever having a long day and finding it hard to write after work, I just remind myself of all the crazy and incredible and hard things I got through in the military. Then I think that sitting in front of a computer with some tasty snacks doesn’t sound too bad after all!

What element of novel writing do you think is your biggest strength?
Finishing the novel? Haha. Seriously, though, I am good at getting the words down on the page. Sometimes too many words! I’m definitely a waffler. I also like to think that I’m good at dialogue, that it comes across as natural.

What element of novel writing do you most struggle with?
Condensing my word count! As previously stated, I am a waffler and having to cut unnecessary words and scenes – or condensing them – is really challenging for me. Luckily, my wonderful editor is a total badass when it comes to this!

Working at Booktopia must give you an insight into another side of publishing that most people don’t see. What benefits do you think there are to writers knowing more about the publishing and/or bookselling process?
Great question! Working at Booktopia has been both a blessing and a curse in this regard. It’s great knowing the backend of the book publishing process: the realities of selling books, of becoming a bestseller, of what interests the booksellers, of how enormous the demand is – all incredibly helpful knowledge. On the other hand, it sometimes makes me wonder if there is even a point in me trying to make this work. So many books don’t even make a tiny splash, while others explode.

I do think it would benefit writers to understand how their books are processed – from the suppliers to the bookstores – and if they can help the process along. It’s also just really interesting! Seeing the trends and the people behind the books… it’s an interesting little world!

The fantasy genre is often filled with a lot of familiar tropes, storylines and characteristics. How do you craft your writing to either avoid or embrace these common elements?
I start by reading a lot of books in the fantasy genre in order to know these tropes and elements. I then decide which elements I don’t like – which is easy for me – and avoid them like the plague. On the other hand, if some moment or character in a book sticks with me, I make sure to investigate why it did so. I don’t want to force anything into one of my stories that doesn’t feel natural or right but if I can include/avoid these tropes then I will.

What can we expect from the next book in the series?
I’m going to avoid spoiling things from book one but I’m so glad you asked this question. I love book two, despite it still needing a lot of TLC. It’s all about stepping forth into the world and experiencing everything for the first time. Kaylan has a lot of challenges ahead of her and she is going to come to understand things she never thought she would.

There are a few new characters – two who I love to write so much and I really think readers are going to adore both of these people.