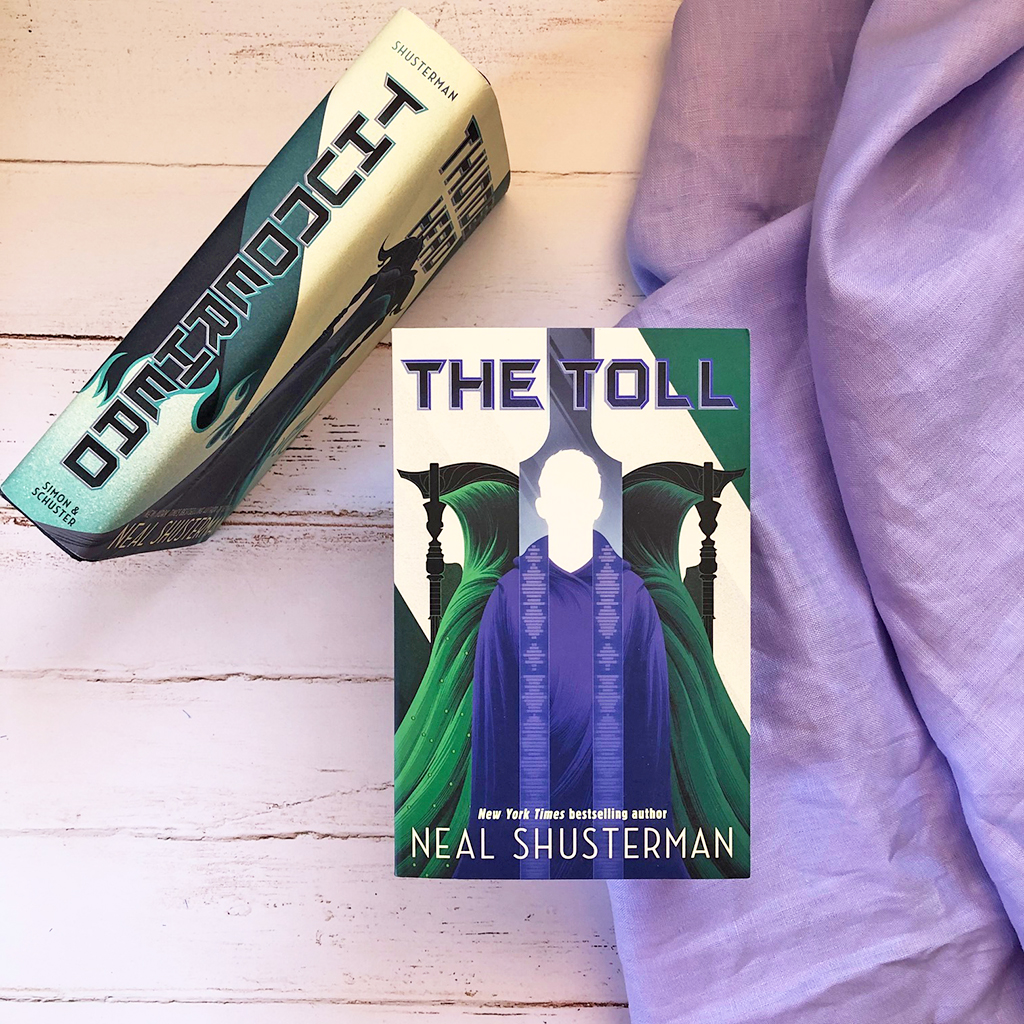 The explosive conclusion to the New York Times bestselling Arc of a Scythe series.

It’s been three years since Rowan and Citra disappeared; since Scythe Goddard came into power; since the Thunderhead closed itself off to everyone but Greyson Tolliver.

In this pulse-pounding finale to Neal Shusterman’s internationally bestselling trilogy, constitutions are tested and old friends are brought back from the dead.

The Toll is the third and final book in Neal Shusterman’s YA fantasy series Arc of a Scythe. Events pick up three years after book two — Thunderhead — left off, where Rowan and Citra disappeared.

Brief recap: scythes are in charge of controlling the human population by killing, and the population relies on the all-knowing A.I of the Thunderhead.

The Toll builds on everything that we’d learnt in the first two books, but brings different elements to the story. Scythe Goddard is the villain of the story, rising to power in The Toll and killing humans for his own personal gain. A religious sect also comes into power, manipulating people for their own needs.

Overall, The Toll is a satisfying conclusion to the series. It ties in all of the threads that were introduced in the first two book, providing readers with a sense of closure regarding our main characters, Greyson, Rowan and Citra.

There are three parallel storylines predominantly running throughout the book — focusing on Greyson, Rowan and Citra, and Faraday — but they meet up towards the end where the characters reunite for the conclusion. Each chapter switches POV between different characters, keeping the reader intrigued in each of their journeys and how their story will intersect with the others.

“Salvage was a painstakingly slow process. It took three months of digging through the submerged debris until they found that outer vault.”

Once again, the characters in the book are incredibly authentic and relatable, drawing the reader in and making us sympathise for them and their plight.

Other strengths of the novel include dialogue, particularly between Greyson and the AI, and the world building. Neal Shusterman captures an incredible system and organisation with this series, which feels really unique in the genre. Neal also captures a greater span of time in this book than in Scythe and Thunderhead, giving context to the world and its makeup and allowing the reader to understand more about the setting.

Special shout out goes to the revelation about the Luna colony and the Mars colony — what a fabulous twist!

“Loriana found that keeping busy was the best way to avoid panicking at their current situation, and, in a vacuum of leadership, most people were willing to take direction from her — something they probably never would have done in the comfort of the AI offices.”

There were parts of the book that were quite predictable, and there was also obvious signposting scattered throughout the novel. This might frustrate readers but ultimately, won’t deter them. Younger readers may not pick up on this, but adult readers probably will.

Additionally, the pacing was a little slow at times and could’ve been sped up. It’s a very long book, sitting at over 600 pages, and I do think it could’ve been trimmed a little.

Despite that, this is an enjoyable finale to the series and readers will be pleasantly surprised with where Neal has taken the story.