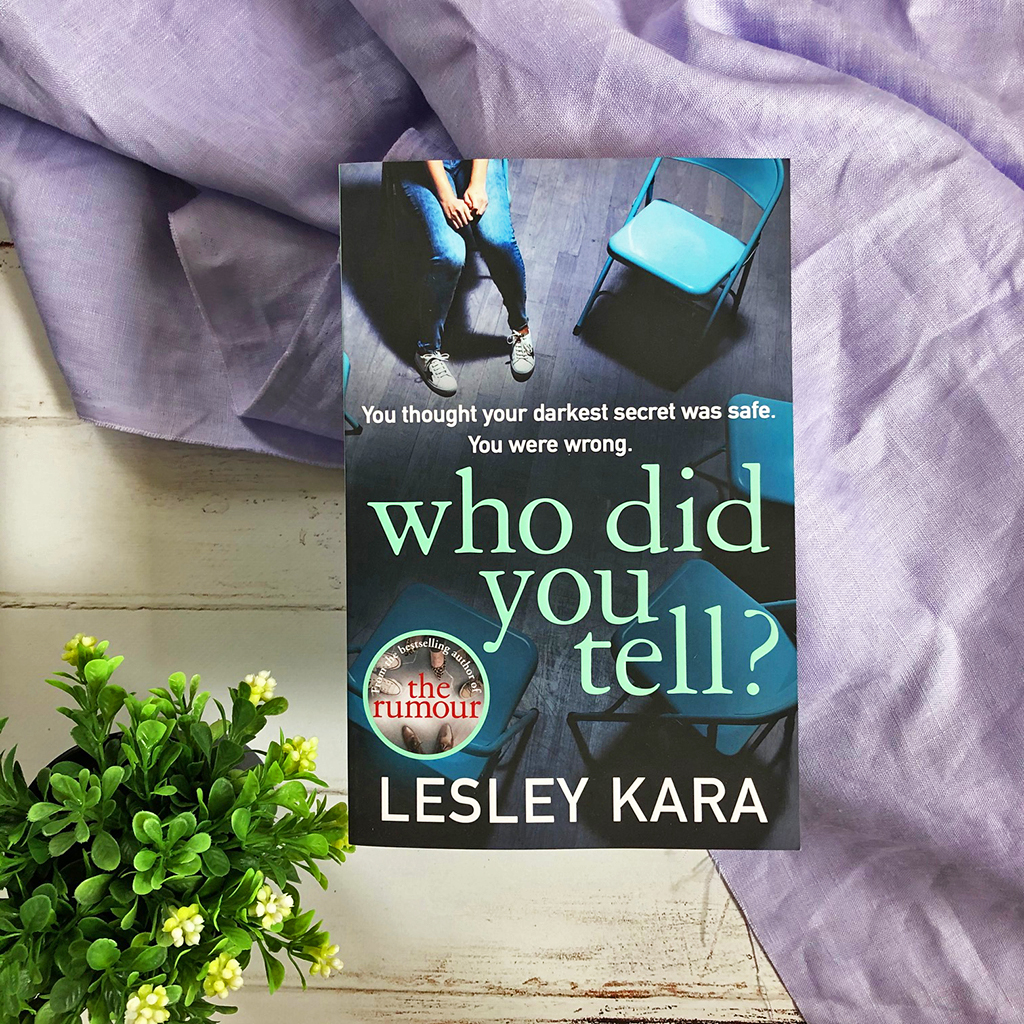 You thought your darkest secret was safe.
You were wrong.

It’s been 192 days, seven hours and fifteen minutes since her last drink. Now Astrid is trying to turn her life around.

Having reluctantly moved back in with her mother, in a quiet seaside town away from the temptations and painful memories of her life before, Astrid is focusing on her recovery. She’s going to meetings. Confessing her misdeeds. Making amends to those she’s wronged.

But someone knows exactly what Astrid is running from. And they won’t stop until she learns that some mistakes can’t be corrected.

Lesley Kara’s Who Did You Tell? is a gripping psychological thriller about recovering addict Astrid and her attempt to escape past mistakes by returning home to live with her mother. Someone who knows her biggest secret has followed her to the small, seaside town of Flinstead, and intends to make her pay for what she did.

There are two POVs throughout the novel. The main storyline is written in first person by thirty-two-year-old Astrid, who is doing her best to recover from her alcoholism and mend her broken relationship with her mother. After fleeing London, she starts attending AA meetings in Flinstead where she meets Rosie and Helen, two older women who are also recovering alcoholics. She forms a close friendship with Helen, and the two bond of their broken relationships.

The other storyline is an anonymous character whose POV appears sporadically in the novel. That person is tailing Astrid, incredibly angry at her for what she did when she was an addict. That person wants revenge.

“She won’t hear me go out, but still, I can’t take any chances. If she knows I’ve gone, she’ll be on the lookout when I come back. She won’t have me in the house if I’ve been drinking — she’s made that patently clear — and I’ve nowhere else to go. Not any more. No more sofas to crash out on. No more favours to call in.”

Astrid is remorseful and full of regrets, but she’s also hopeful that she can recover from her addiction and steer her life back on the right path. She’s sheepish and lacking in self confidence, and the reader can sense how worried she is about falling off the wagon. A lot of the tension in the novel comes from the possibility of Astrid drinking again, and how that will affect her relationship with her mother.

Over time, Lesley drip feeds us information about Astrid’s past and how she came to be living with her mother in Flinstead. It’s clear that Astrid had alienated everyone in her life and her mother is the last remaining contact she has. Astrid’s past was full of pain and hurt, and she destroyed a lot of relationships and friendships along the way.

“It’s time-consuming, intricate work, but if it was good enough for the Old Masters, then it’s good enough for me, and Richard has already said that I must take as long as I need. He’s not after a rushed job, and neither am I. This house is a labour of love for him. He cares about aesthetics.”

Who Did You Tell? explores themes of guilt and remorse, but also forgiveness, trust and redemption. Astrid wants to get her life back on track, and in Flinstead she starts to build a support network full of people who want her to succeed.

Once Astrid learns to trust others, she can let go of the walls around her and let those people in. She starts to tell the truth, admit her wrongs, and move forward with the right people by her side.

“I wish I hadn’t started this now. It’s all coming out. The wreckage of my life, spilling out in a great ugly heap. I know if I’m going to do this Twelve Step thing properly, then at some point I’m going to have to confess all this anyway, and the rest of it.”

Admittedly, I did find the novel a little predictable. I guessed pretty quickly who the anonymous character was, and I think too many hints were given to the reader. Additionally, at times I found Astrid quite unlikeable — a little too weak and timid?

Suspenseful and fast-paced, Who Did You Tell? will have you desperate to complete. Recommended for fans of crime, thriller and psychological dramas.