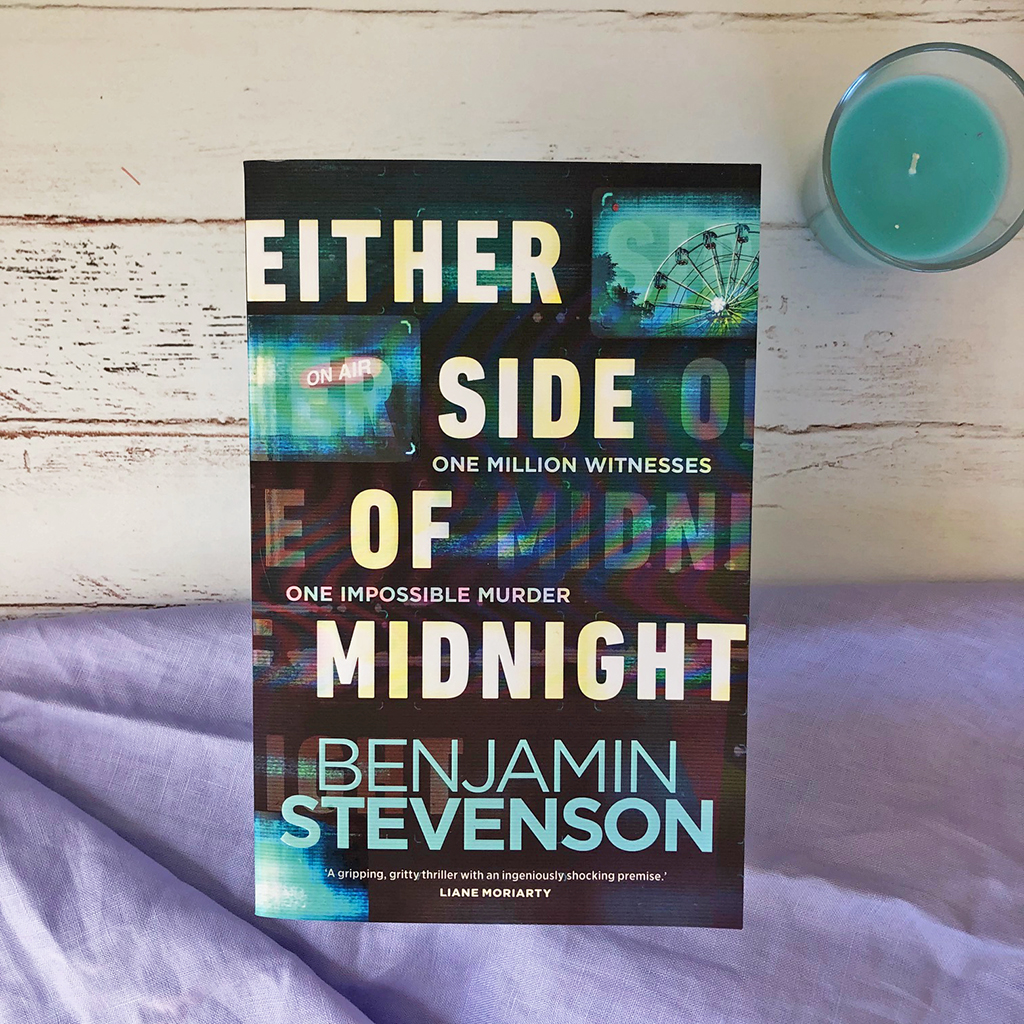 At 9.01 pm, TV presenter Sam Midford delivers the monologue for his popular current affairs show Midnight Tonight. He seems nervous and the crew are convinced he’s about to propose to his girlfriend live on air.

Instead, he pulls out a gun and shoots himself in the head.

Sam’s grief-stricken twin Harry is convinced his brother was murdered. But how can that be, when one million viewers witnessed Sam pull the trigger? Only Jack Quick, a disgraced television producer in the last days of a prison sentence, is desperate enough to take Harry’s money to investigate.

But as Jack starts digging, he finds a mystery more complex than he first assumed. And if he’s not careful, he’ll find out first-hand that there’s more than one way to kill someone . . .

Australian author Benjamin Stevenson publishes his second crime novel Either Side of Midnight, and it’s another page-turning, fast-paced, high-tension masterpiece. Either Side of Midnight wraps its claws around the reader, drawing them closer with each passing chapter. Readers will have no choice but the ride the rollercoaster of this novel.

Fans of Benjamin’s previous novel, Greenlight, will recognise disgraced TV documentarian Jack Quick as the protagonist. He’s been serving a prison sentence after the events in Greenlight, and when he’s released, he accepts the paid opportunity investigating news anchor Sam Midford’s suicide. Jack is thrust back into the world he’d left behind — another suspicious death, more deceitful suspects, and plenty more complex and complicated truths.

Either Side of Midnight explores the power of technology, and how easily words can influence others. Services aren’t yet equipped to handle criminal cases where technology is used as a weapon.

“Jack hadn’t been prepared enough to come back here. The whole building was triggering. The epileptic rotation of adverts. The rustle of the ground floor. Any of the bathrooms where, sometimes, at ten in the morning, Jack on his knees and a man snorting a line off the basin would lock eyes conspiratorially.”

Once again, we’re thrust back into Jack’s world, quickly remembering what made us like him so much the first time around. He’s flawed, but likeable. Relatable. He’s calculated and intelligent — quick to join the dots in the case. Dialogue is quick and blunt, Benjamin only using as many words as necessary to keep the pacing consistent, to keep the story moving forward.

Chapters end with revelations and unveilings, drawing the reader in and forcing them to keep reading. Benjamin is incredibly talented at dropping hints and clues without the reader feeling like they can guess the ending.

“Harry didn’t know if he slept. The night blurred past, timeless. Some moments he was counting the seconds, and others he seemed to zone out and when he zoned back… was the moon in a different spot? Time must have passed.”

Set in Sydney, an underlying theme is familial loyalty, and processing feelings of regret. Jack is still dealing with an accident from his childhood that left his brother in a permanent vegetive state and entirely reliant on care. Jack’s father has been forced to take on the burden of his son’s care while Jack has been in prison, and Jack feels deep regret.

There isn’t much I can fault with this novel. The cast of characters are three-dimensional and engrossing, the plot feels original and incredibly inviting, and Benjamin has incredible skill crafting scrumptious crime/thriller novels.

“It’s a cliche in film and television to present recent widows as brittle, frail. To have the make-up team use pale foundation, ghost-like, and smear dark circles under their eyes. Every time a widow opens a door in a film, they’ve just finished crying. The message being that, without their husband, they are barely keeping it together.”

Recommended for fans of crime and thriller. Readers don’t need to read Greenlight to understand or follow the events in this new novel — Either Side of Midnight functions as a standalone.