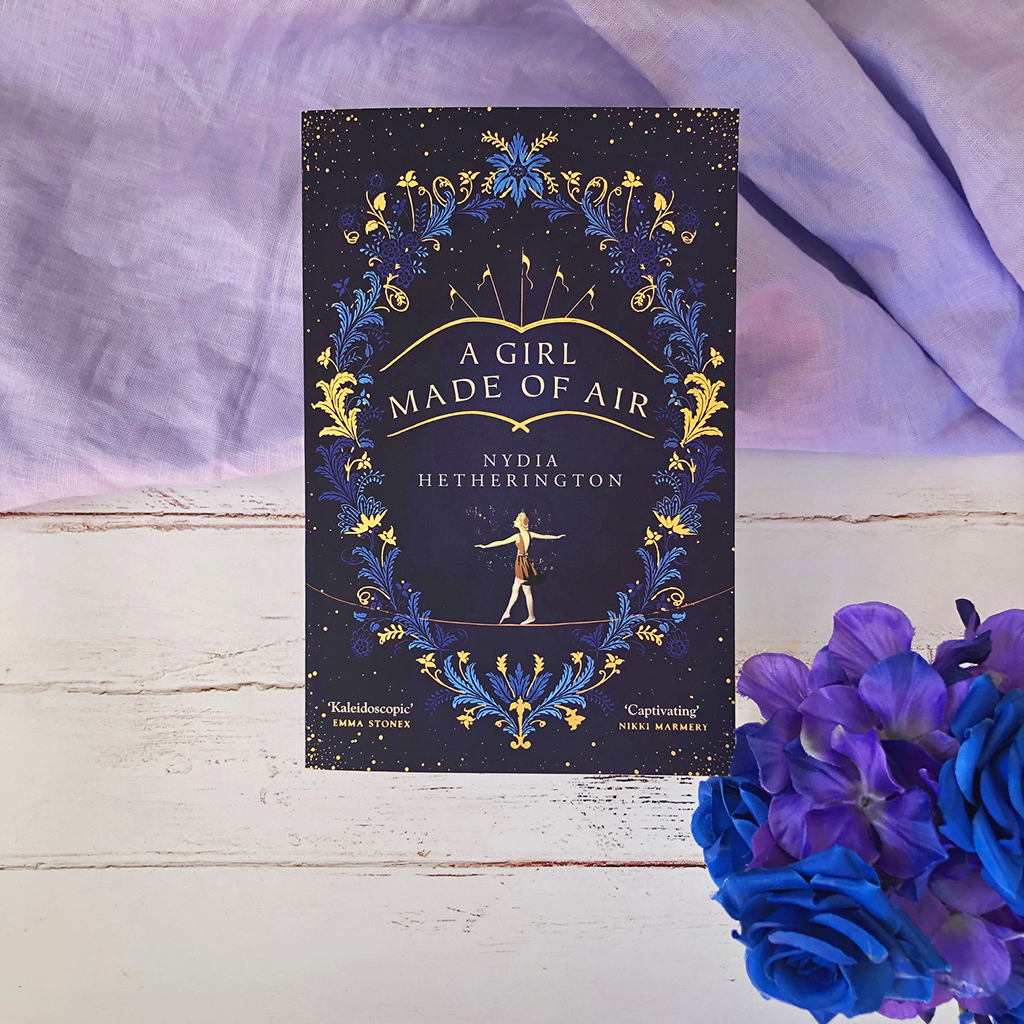 This is the story of The Greatest Funambulist Who Ever Lived…

Born into a post-war circus family, our nameless star was unwanted and forgotten, abandoned in the shadows of the big top. Until the bright light of Serendipity Wilson threw her into focus.

Now an adult, haunted by an incident in which a child was lost from the circus, our narrator, a tightrope artiste, weaves together her spellbinding tales of circus legends, earthy magic and folklore, all in the hope of finding the child… But will her story be enough to bring the pair together again?

Poetic, literary fiction that transcends generations, Nydia Hetherington’s A Girl Made of Air will captivate and entice readers.

Told from the perspective of a nameless narrator — she’s only ever nicknamed Mouse — A Girl Made of Air is primarily set within a circus. Our female narrator is born into a famous circus family. Her mother is a beautiful, revered and coveted performer, but is scarred from the birth of her child. After giving birth to the narrator, she is mentally unable to connect with her and does very little in her role as mother. The narrator’s only connection with a blood relative is her father, who is kind and communicative, but not overly forthcoming or parental in his nature.

The narrator bonds with a red-haired funambulist named Serendipity Wilson, and the two form a strong friendship. Serendipity’s training allows the narrator to achieve levels of success and fame that would not have been possible otherwise.

“I’ve grown tall like my mother, limbs stretched and long, but I’m ungainly. I don’t know how to manage my body, which, at now eleven years old (or thereabouts), has outgrown me. My walk is clumsy, off-kilter; my hands great shovels that swing hopelessly about, propelled seemingly without my instruction by over-long arms.”

The book follows an interesting structure. It opens in present day 1983, where the protagonist is well-known for her performative success. She’s in the midst of an interview with a journalist from The New York Times, talking about her career but also her connection with the mysterious Serendipity Wilson. After the interview is cut short, the protagonist then writes down the story of her life to date — emanating the feel of a memoir or a long-form letter, told chronologically. Interwoven throughout the novel are mythical tales that Serendipity herself passed along to our main character.

A chronological retelling felt like the most suitable structure for this book, because it allowed the present-day-protagonist to reflect on her past as she was telling her story. Interspersed throughout moments of memories, the protagonist will offer readers glimpses of insight. The ‘voice’ is mature and intelligent, and her reflection and hindsight allows for an engaging and attentive read.

“There are several blank pages after this. It’s odd that I should have left the pages blank. Maybe it was a statement, something about life being empty; the sort of thing young people do. This isn’t how I remember things. The events happened exactly as they’re written, yet I cannot find myself in the words.”

A Girl Made of Air features a strong cast of characters, sometimes so vibrant and lively they feel crafted as cartoons — Fausto the Ringmaster, Manu, Marina, Big Gen, and of course, the notorious Serendipity Wilson, who always feels a little out of reach and never fully understood (not a bad thing).

Serendipity is by far the most intriguing of the secondary characters. We only ever interact with her through the protagonist’s memories, so there are definitely holes in her personality, her backstory, and her feelings towards the man character that we never fully understand.

For a time, Serendipity is like a mother figure for our protagonist — attentive and maternal. But she’s also free and spritely, and galavants around on her own to live her own fantastical adventures. There’s definitely an obsession that forms, from our protagonist. She meddles in Serendipity’s life in ways that have ramifications many years after.

“I sat for a moment on a colourful lion, stroked its chipped nose. From there I could see over the encampment. The big top — a round, blue-and-white-striped leviathan with pointed tip, topped off with a jolly yellow flag that called to passers-by as it flapped in the breeze — dominated everything.”

Our protagonist may be flawed, but she’s also a child for most of the book so the reader empathises for her. She was raised in less-than-ideal circumstances, with a distanced and reclusive mother who never really loved her. You warm to the protagonist very early on, and you keep reading to find out how her tale progresses.