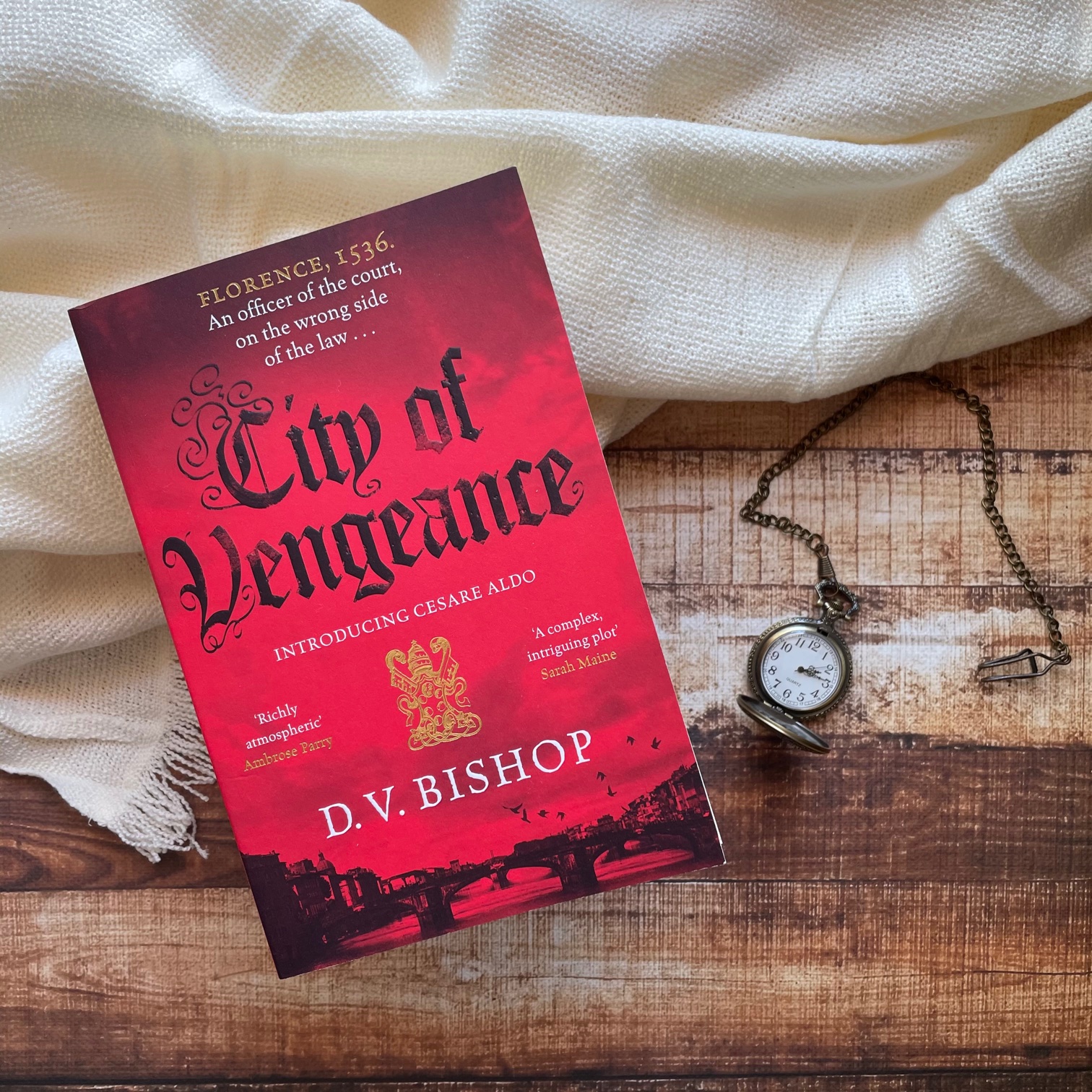 Florence. Winter, 1536. A prominent Jewish moneylender is murdered in his home, a death with wide implications in a city powered by immense wealth.

Cesare Aldo, a former soldier and now an officer of the Renaissance city’s most feared criminal court, is given four days to solve the murder: catch the killer before the feast of Epiphany – or suffer the consequences.

During his investigations Aldo uncovers a plot to overthrow the volatile ruler of Florence, Alessandro de’ Medici. If the Duke falls, it will endanger the whole city. But a rival officer of the court is determined to expose details about Aldo’s private life that could lead to his ruin. Can Aldo stop the conspiracy before anyone else dies, or will his own secrets destroy him first?

Debut historical thriller City of Vengeance by D.V Bishop takes us to Renaissance Florence, 1536. Cesare Aldo is tasked with solving two murders — moneylender Levi, who was stabbed to death in his home, and cross-dresser Corsini, who was bashed to death after dark. The novel also explores the unrest in Florence, and the traitorous plan to overthrow Alessandro de’ Medici by his own cousin. Whilst fiction, this book is inspired by true events, which are detailed in the Author’s Note at the end.

Readers needn’t love historical fiction to enjoy City of Vengeance — you must merely enjoy crime and thriller stories. At its core, this is a book about two murders, and a lead detective trying to uncover the truth. Whilst the setting may feel vastly different, this novel follows a similar format to most police procedural tales.

“It took Strocchi hours to find a true address for Corsini. The Otto’s records revealed several arrests of him in recent months: petty theft, pickpocketing and indecent acts. But the accused gave a different address each time, forcing Strocchi to eliminate them all.”

D.V Bishop does well to paint the setting. I’m somewhat familiar with the Medici reign and felt like the author captured the atmosphere of the time — societal behaviour and attitudes— rather well. It’s clear that years of research went into writing this book, a lot of source material and perhaps reference books as well.

City of Vengeance explores political intrigue, betrayal, familial obligation and keeping secrets. Each major character has been crafted uniquely, their personalities differing significantly. We have more than one villain, and plenty of red herrings along the way to throw us off the scent of the murderer/s. Aldo in particular is a well-developed character. He is in charge of uncovering secrets, but at the same time, he’s hiding some secrets of his own.

“Aldo went to the door. It stood ajar but there was no splintering to the wood, and no damage to the bolt. That suggested Levi had let his attacker in — a debtor, maybe, or a rival? Or had it been someone closer to home? Killings in Florence were not infrequent and were usually personal, fuelled by family, love, hate or greed.”

Despite the book only taking place over a few days, the pacing slows in the middle and suddenly the novel feels very long. Four hundred pages wasn’t necessary for the scope of this story, and I’ll admit I groaned a little when I found out this was the first book in a planned series. Please, make the sequel more succinct!

Admittedly, the other gripe I had with the story were the similarity in names. Perhaps unavoidable when writing a story based on true events, but we had Cesare, Corsini, Cosimo and Cerchi. It took me about one hundred pages to tell them apart whenever they appeared in a scene together — some names starting with another letter would’ve been welcome.

“Levi had been anxious on the road back from Bologna, but not defeated. If what Dante said was true, something must have happened after Levi’s return to Florence.”

Energetic and intense, with enough intrigue to keep you reading. Recommended for readers of fantasy and medieval history.