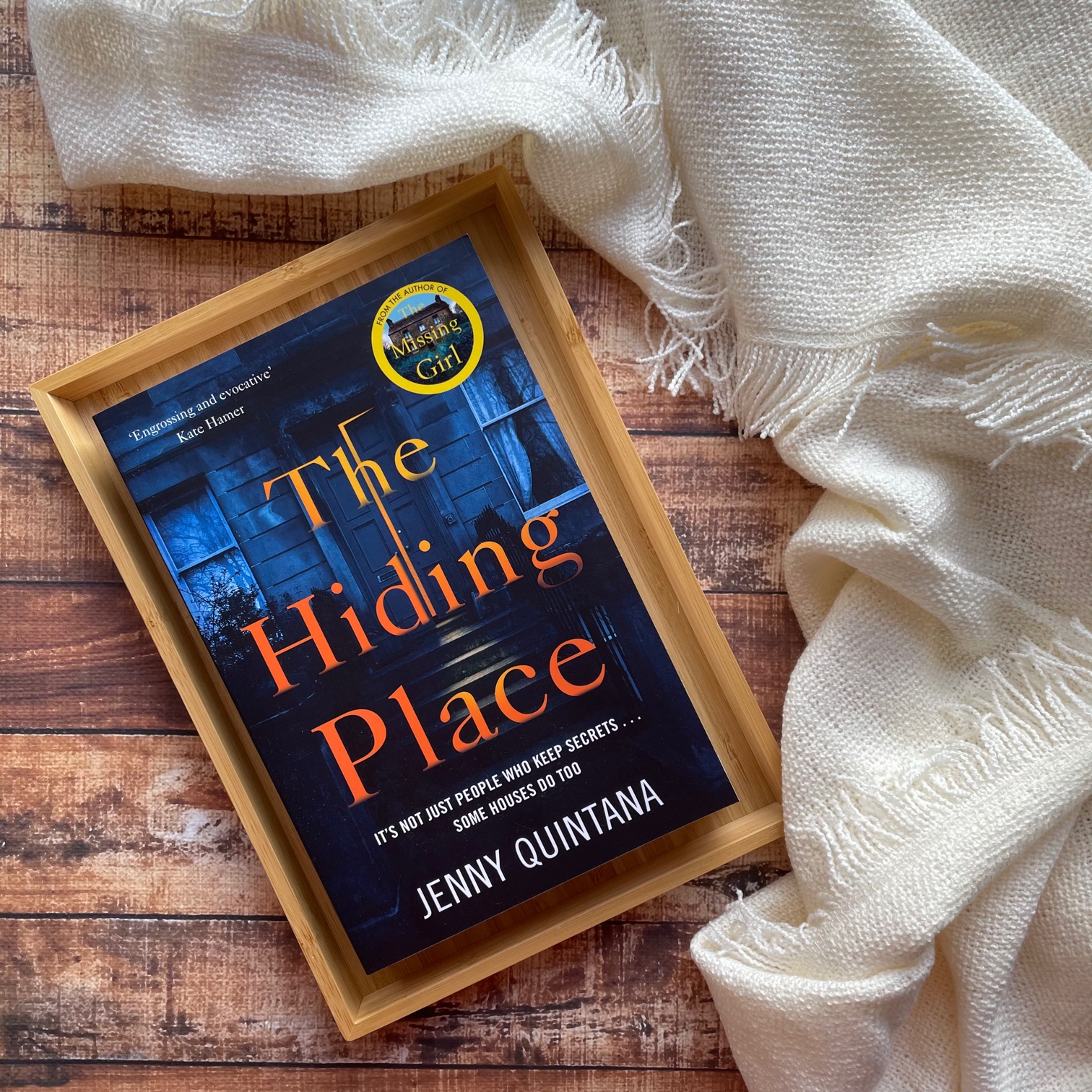 Some houses have their secrets. But so do some people . . .

Abandoned as a baby in the hallway of a shared house in London, Marina has never known her parents, and the circumstances of her birth still remain a mystery.

Now an adult, Marina has returned to the house where it all started, determined to find out who she really is. But the walls of this house hold more than memories, and Marina’s reappearance hasn’t gone unnoticed by the other tenants. Someone is watching Marina. Someone who knows the truth . . .

Jenny Quintana’s The Hiding Place is a crime thriller about an abandoned baby in a share house, and that child’s search for the truth about her parents.

The Hiding Place switches between three POVs — Connie in 1964, and Marina and Eva in 1991. Marina, who was abandoned as a baby, moves into the house she was discovered in to try and find out who her parents were. Eva, her new neighbour, is an emotionally unstable, anxious woman with long-buried traumatic memories. Slowly, we come to understand how these three stories correlate, and why Marina was abandoned.

“The sky hangs low and claustrophobic and Marina loosens her collar despite the chill. She has an odd, prickling feeling as if she’s being watched, but the houses are as silent as they were last night, their windows shuttered — and when she looks back at number 24, there is no shift in curtains, no one looking out.”

There’s quite a large cast of characters in this novel — a lot of people moving in and out of the storyline — and Jenny captures each character and role with enough unique personality that makes it easy for the reader to follow. There are plenty of rooms in the house, and therefore a lot of threads for Marina to follow in her quest for the truth.

Jenny always crafts a premise that will entice readers. The abandoned baby is not the only crime to be uncovered in this novel, and Jenny captures a claustrophobic, eerie setting very well. What secrets and memories does this house hold? In a way, the house feels like another character in the book, holding on to its own secrets and slowly releasing them when necessary.

One of the things I love most about Jenny’s books is how she concludes her chapters. There’s either something reflective about the ending, forcing you to feel the emotion she’s working to transmit, or it’s a cliffhanger that forces you to keep turning the page because you want to see how that thread continues.

“Was Connie in desperate straits? She wasn’t sure. And perhaps she could solve the problem herself. She had heard that moving heavy furniture might bring on a miscarriage, or flinging yourself down the stairs. There were poisons that would flush the baby clean away.”

Admittedly, Marina does feel like the weakest character of the three. Eva’s personality immediately draws you in — she’s mysterious and plagued by childhood memories. You immediately want to know more. And your heart breaks for Connie. She’s hopeful and ambitious, but incredibly naive. And she’s very much in love. Marina’s search for the truth comes across a bit stiff at times, the storyline blocking her personality from shining. She comes across unfeeling, unemotional, devoid of compassion. She’s determined and I admire that, but I found her characterisation to be lacking.

Additionally, the ending was a bit of a letdown. For such a slow burn of a novel, I was expecting big twists or surprises — neither happened. Whilst some people withheld the truth, the circumstances around Marina’s birth and abandonment weren’t quite as enticing as I’d hoped.

“At school, when she had managed to get there, she had been silent and serene, unemotional, a remarkable musical talent. The bullies hadn’t understood her so had left her alone. At music college, she had taken on a similar persona, staying in her room at halls and avoiding communal areas like the students’ union and bar.”

An engrossing tale of long-lost secrets, The Hiding Place is the perfect rainy day read. Recommended for fans of crime, thriller and mystery. Readers of women’s fiction will also enjoy this.