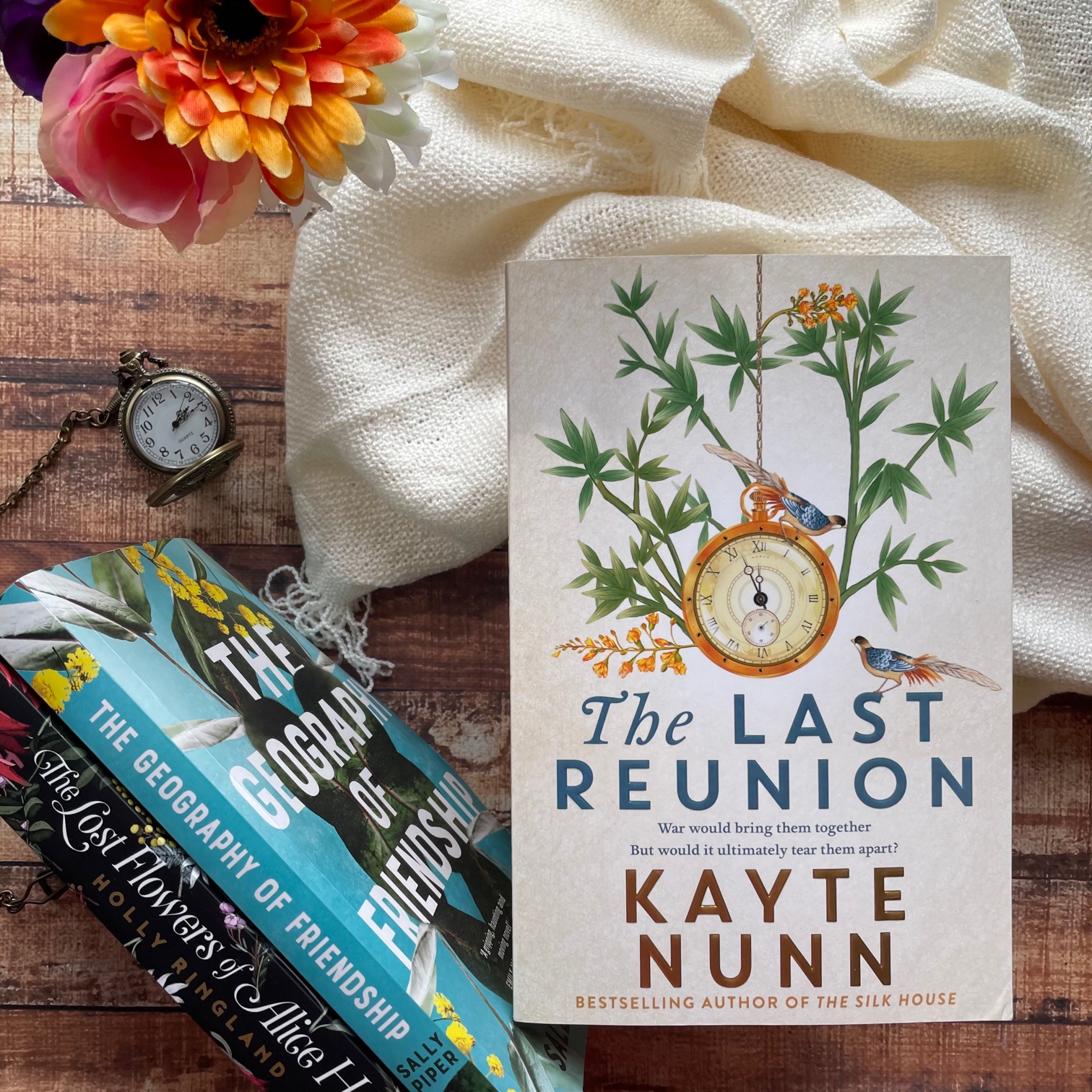 Burma, 1945. Bea, Plum, Bubbles, Joy and Lucy: in search of adventure, attached to the Fourteenth Army, fighting a forgotten war in the jungle. Assigned to run a mobile canteen, navigating treacherous roads and dodging hostile gunfire, they become embroiled in life-threatening battles of their own.

Oxford, 1976. A woman slips into a museum and steals several rare Japanese netsuke, including the famed fox-girl. Despite the offer of a considerable reward, these tiny, exquisitely detailed carvings are never seen again.

London and Galway, 1999. On the eve of the new millennium, Olivia, assistant to an art dealer, meets Beatrix, an elderly widow who wishes to sell her late husband’s collection of Japanese art. Olivia travels with Beatrix to a New Year’s Eve party, deep in the Irish countryside, where friendships will be tested as secrets kept for more than fifty years are spilled.

Inspired by the heroic servicewomen who served in the ‘forgotten war’ in Burma, Kayte Nunn’s The Last Reunion alternates between dual timelines and centres around a valuable netsuke from WWII that is stolen from a museum. In 1999, it resurfaces, along with the story of how it came to be in that museum, and its origins.

Whilst the novel opens with the theft in 1976, we never return to that storyline. It merely sets up the mystery of the novel, and draws the reader in.

Written in third person, The Last Reunion switches between 1945 and 1999. In 1945, we mainly follow the determined Bea as she signs up as volunteer for a mobile canteen with a group of other women. In 1999, young art dealer Olivia tracks down an elderly Bea in an effort to find out what happened to the famous — but missing — fox-girl netsuke.

“Bea turned away, her hand to her face. Death was all around them — she wasn’t so naive as to think otherwise — but to see it up close, and one so pointless, was somehow more shocking than reading the lists of soldiers who died in battle every day.”

Alongside many other elements, The Last Reunion explores female friendship, family and sacrifice, and how in the toughest of times, we find ourselves drawn to those who may be very different from us.

The Last Reunion feels like a fresh addition to the historical fiction genre.I’ve read many novels set during WWII and this was an aspect to the battle that I hadn’t heard or read about. This new perspective will appeal to seasoned historical fiction readers like myself.

Another strength lies in Kayte’s detailed descriptions of setting, characters and objects – particularly the netsukes. Each character feels unique, their voice distinct. Additionally, you felt like you were experiencing the war alongside these women, particularly with such vivid descriptions of weather — the rain, the floods, the heat. The writing is so visceral, scenes lift from the page.

“Olivia hesitated; it seemed like such an odd request, to accompany an old woman to a reunion, but she would love to visit Ireland; it had always seemed to her to be such an appealing country; the accents alone were utterly beguiling.”

Admittedly, there were elements to the ending that felt a little rushed, as if the motivations or thoughts behind certain actions happened too suddenly to feel authentic. For example, when Plum comes to her senses about her husband, and also when a career opportunity conveniently lands in Olivia’s lap.

“Bea was familiar with the sight of her father’s service revolver, had watched him clean and oil it, but though he had explained its workings to Archie when he was still a boy, Bea had never been allowed anywhere near it. Guns, the unspoken message had been, were for men and boys, not the business of women and girls.”

A story of friendship and family, but also loss and betrayal, The Last Reunion is recommended for readers of historical fiction, war stories, and family sagas. Readership skews female.