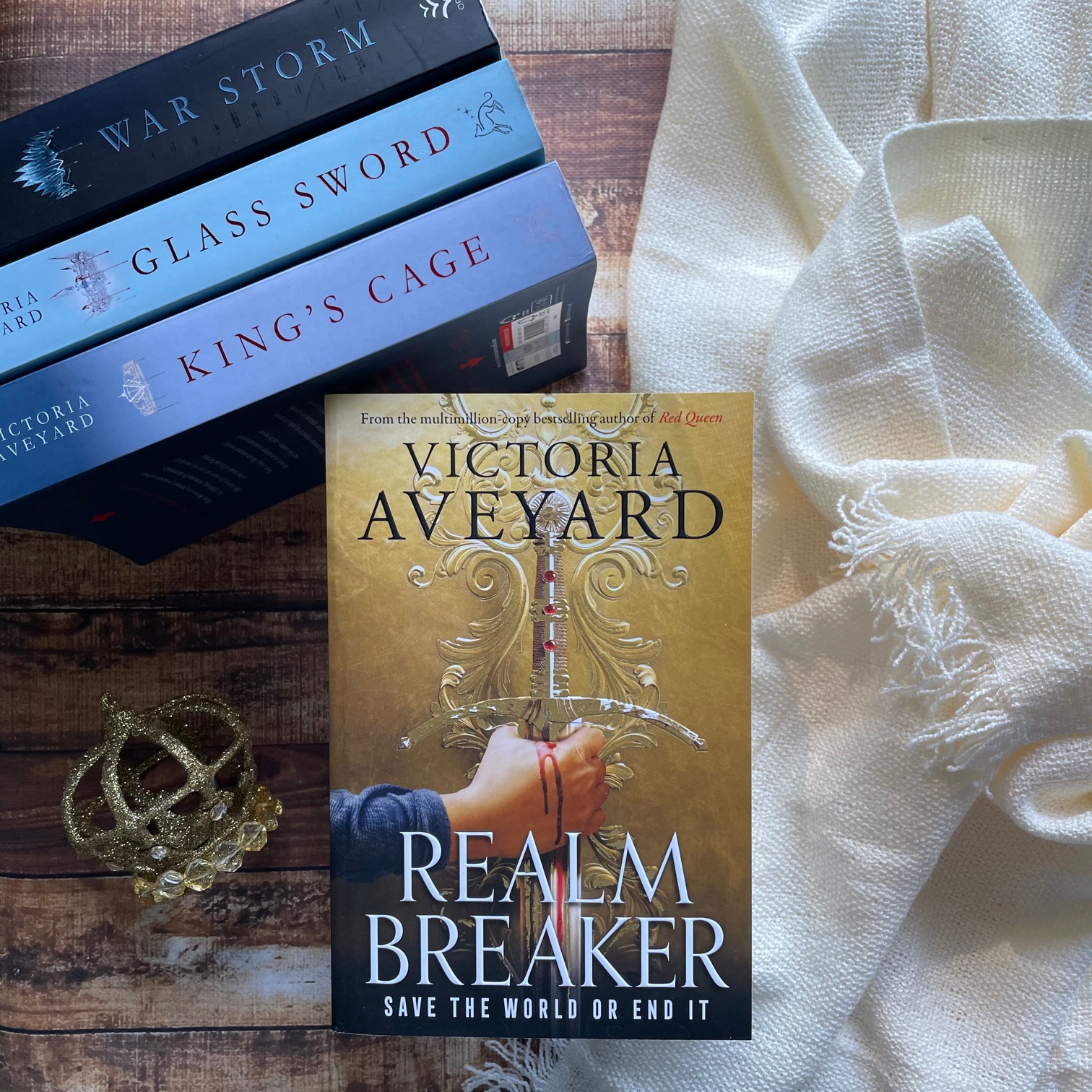 A strange darkness is growing in the Ward. Even Corayne an-Amarat can feel it, tucked away in her small town at the edge of the sea.

Fate knocks on her door, in the form of a mythical immortal and a lethal assassin, who tell Corayne that she is the last of an ancient lineage – with the power to save the world from destruction.

Because a man who would burn kingdoms to the ground is raising an army unlike any seen before, bent on uprooting the foundations of the world. With poison in his heart and a stolen sword in his hand, he’ll break the realm itself to claim it. And only Corayne can stop him.

Alongside an unlikely group of reluctant allies, Corayne finds herself on a desperate journey to complete an impossible task, with untold magic singing in her blood and the fate of the world on her shoulders.

Victoria Aveyard’s Realm Breaker is the first novel in a new fantasy series that follows a madcap group of misfits as they band together to save their realm. Realm Breaker is full of heart and heroics, with moments of humour peppered throughout.

Switching POV between multiple characters, the story predominantly follows Corayne an-Amarat, a pirate’s daughter and the secret child of the ancient Spindleblood lineage. She’s young and sheltered, but wise, and she desperately craves adventure and purpose. When she learns the identity of her father, she is thrust into an urgent and dangerous quest to save her home — Allward.

“Garion’s eyes trailed from her face to the dagger, weighing them both. She read his body keenly. He was lean as she remembered. The sword at his hip was thin, a light blade of good steel. He was not a brawler like some they’d trained with.”

Victoria is skilled at weaving together fast-paced adventures, filled to the brim with urgency and tension. The world-building in this series is immense, and it’s evident how much thought and planning has gone into crafting this tale. Victoria’s strength lies in the cast of characters she’s erected, from a ruthless and witty assassin and a noble and proud Elder, to a mysterious but powerful sorceress and an underestimated but courageous and humble young squire.

Realm Breaker positions women at the centre of this tale, emphasising their strength and tenacity — their determination. Sorasa was probably my favourite character. She always manages to scrape through an altercation, and is incredibly skilled in combat. She also adds a layer of humour to the story, which feels necessary and welcome in high fantasy.

“The other travelers weren’t of much interest to her, not while the ship raced toward the open sea. But Sorasa watched them intently, weighing each person on board as she would a prize pig. Corayne glanced at the assassin occasionally, trying to glean anything, always coming up short.”

Admittedly, there are a few flashbacks in the story where we already know what happens — the scene just provides a different viewpoint — and they felt odd and unnecessary. The book is over 550 pages and I think those flashbacks could’ve been trimmed or the information used a bit more strategically so it didn’t feel repetitive.

Whilst characters and quests felt a bit similar within the realm of the fantasy genre, Victoria’s strength lies in her characterisation and her description. The story is complex but engaging, keeping a reader entertained. Characters feel three-dimensional, with hidden agendas and motivations, and motives that conflict with those around them, allowing for a dynamic pace and progression of story.

“Another smiling refusal could be the difference between life and death, for all she loved and knew. Though he had no skill in magic, she saw Domacridhan again, his face torn and bleeding, his eyes filled with the horrors he had witnessed in the foothills.”

Recommended for readers of high fantasy. Readership feels inclusive of young audiences as well as established readers. Fans of Victoria’s Red Queen series will be pleased. 14+