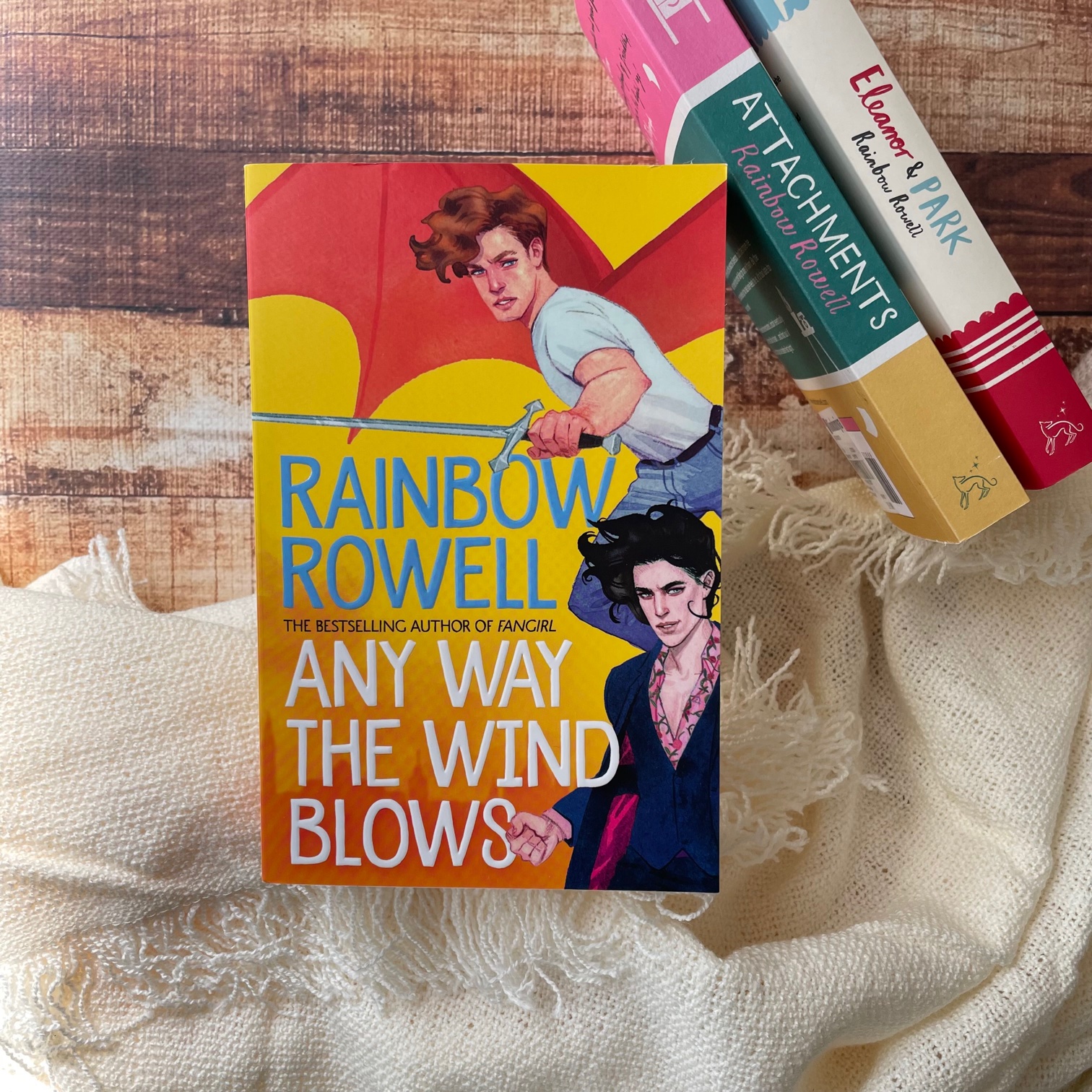 In Any Way the Wind Blows, Simon and Baz and Penelope and Agatha have to decide how to move forward.

For Simon, that means deciding whether he still wants to be part of the World of Mages — and if he doesn’t, what does that mean for his relationship with Baz? Meanwhile Baz is bouncing between two family crises and not finding any time to talk to anyone about his newfound vampire knowledge. Penelope would love to help, but she’s smuggled a cursed American Normal into London, and now she isn’t sure what to do with him. And Agatha? Well, Agatha Wellbelove has had enough.

Any Way the Wind Blows takes the gang back to England, back to Watford, and back to their families for their longest and most emotionally wrenching adventure yet. This book is a finale. It tells secrets and answers questions and lays ghosts to rest.

The third and final book in this young adult trilogy, Rainbow Rowell’s Any Way the Wind Blows brings Simon and Baz’s story to a close. It provides closure for Simon’s origin story, as well as the other characters we’ve met along the way.

Strengths include humour and wit, and the existence of magic in the story and how it develops over the course of the novel. Interpersonal relationships and emotional intelligence is also another strength, as characters start to cross paths again and are forced to confront deep-rooted insecurities.

“I thought maybe Snow didn’t want to share a bed with me because he was afraid I’d bite him in my sleep. But apparently that’s fine! Bloodletting is fine – intimacy is the real taboo!”

This final book in the series will please fans of the series who have been holding out for some Simon and Baz romance. But to be perfectly honest, this book has a pretty non-existent plot. It feels like it’s been written purely to serve the fans, and it wasn’t necessarily written because it needed to be. Hardly anything happens, and the novel is mainly driven by dialogue. The mystery comes in quite late in the novel and is solved rather fast. The ‘villain’ in the book doesn’t hold enough presence in the novel, and is not intimidating enough for his role.

The best part of the book is the moments of humour peppered throughout the chapter, but they’re few and far in between. And the novel moves between so many different characters, it gives a bit of whiplash. I feel like those who have read the first two books will be interested in seeing how it ends, and the writing is certainly accessible enough to make reading this quite easy, but overall, this is quite a disappointing conclusion. The plot was so limited it actually felt like book 2 in a trilogy.

“It wasn’t quite like that. I didn’t chicken out. It was more like I got overwhelmed. I couldn’t stop thinking about what Baz had said and how I needed to talk to him. Immediately, it felt like some window was closing. It was probably already closed, and I’d need to break it open.”

Also, if my memory serves me correctly, Simon was quite anxious and shy about his feelings for Baz in previous books. And in this book, he’s gone from 0-100?

“The good thing about my aunt’s terrible flat is that I can do some light hunting without even leaving the building. I just have to dispose of the empty rodents when I’m done.”

For readers who are up to date with the trilogy, it’s nice to see how the story ends. But this is not the explosive finale that I anticipated. Readership skews female, 14+