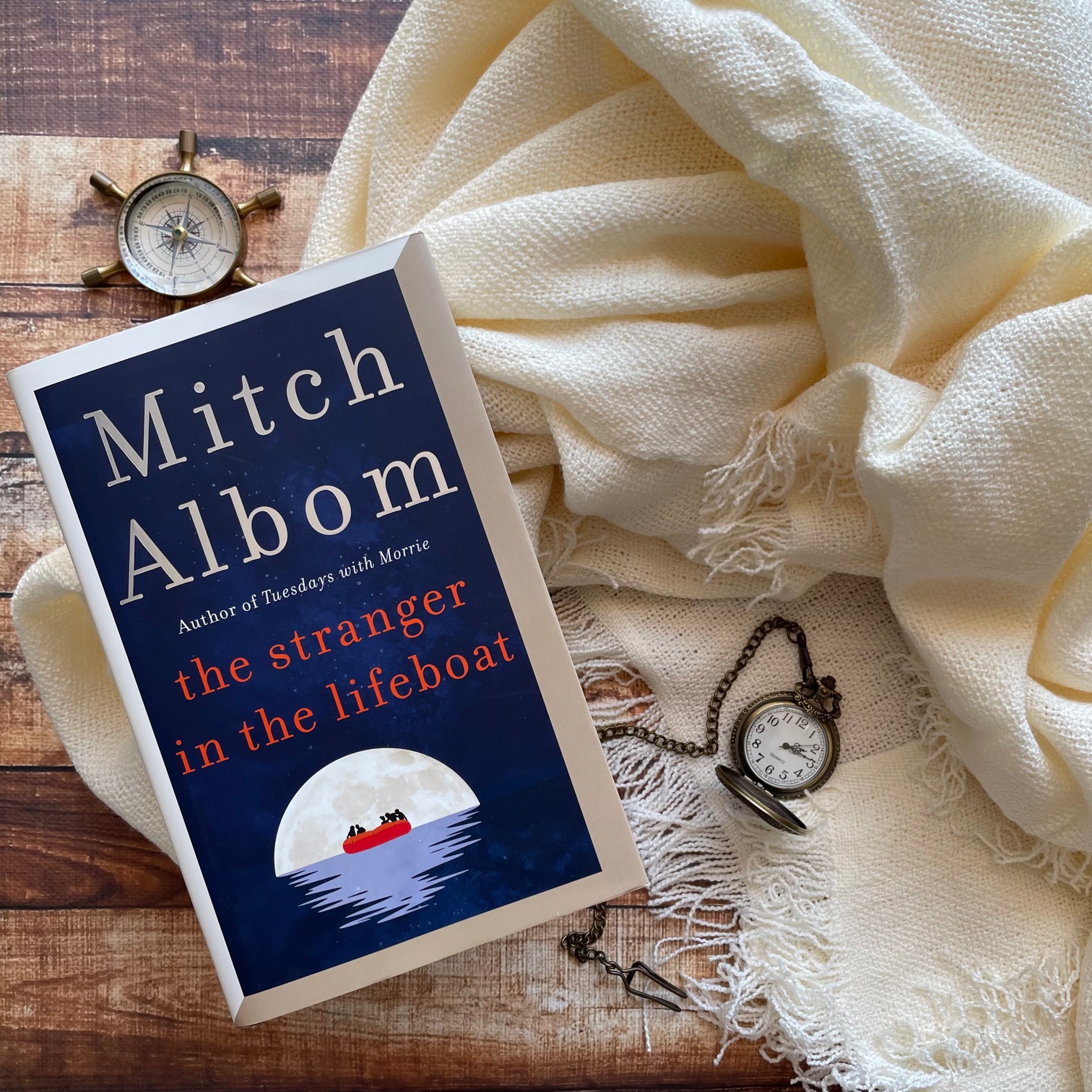 Adrift in a raft after a terrible shipwreck, ten strangers struggle to survive while they wait for rescue.

After three days, short on water, food and hope, they spot a man floating in the waves. They pull him on board – and the survivor claims he can save them.

But should they put their trust in him? Will any of them see home again? And why did the ship really sink?

Atmospheric and imaginative, Mitch Albom’s The Stranger in the Lifeboat is quite a compact novel – at just over 250 pages in a gorgeous hardback, ten shipwreck survivors try to last in a lifeboat in the middle of the ocean. Days turns to weeks, and soon their supplies are running low. When they pull in a stranger floating in the ocean, he claims to be God – the group are more worried about sharing their rations than they are about understanding where he’s come from.

The story moves back and forth between past and present. In the past, the ten survivors are on the water trying their best to last. One of them, a man named Benji, narrates this perspective and writes his experiences in a notebook. In the present, someone discovers an empty lifeboat along a secluded beach and inside is a notebook detailing what happened on that lifeboat. As the novel progresses, we come to understand what happened to the survivors and how that lifeboat ended up on the beach – empty.

“I grabbed the safety rope along its side. Whoever had been waving that flashlight was gone. I can only imagine he or she was thrown off by those waves. I tried to look for a body in the water, but another wave began curling into form, so I gripped the rope with both hands, and instantly I was tossed again.”

Mitch’s writing is poignant and the premise is enough to entice and engage until the final pages. The story and the characters’ survival is surprisingly detailed, and I found Benji’s narration inviting and compelling. You’re drawn into their secrets, and the overarching mystery around how the luxury ship sunk is a plot device designed to keep you turning pages until the very end.

Whilst not all survivors in the lifeboat are memorable, they’re not meant to be. Naturally, not everyone is going to survive until rescue, so Mitch keeps the focus centred on pivotal characters – Benji, Lambert, God, and a silent young girl called Alice.

The other pivotal storyline is that of Chief Inspector Jarty LeFleur, who is determined to find out what happened to the survivors when an empty lifeboat washes up on a deserted beach. He is still grieving the tragic death of his daughter, and the resulting estrangement from his devastated wife. Studying the lifeboat and the notebook he finds inside allows him to come to terms with what happened to his family.

“The proper protocol was to replace the bag immediately and call in higher authorities. Pass it up. Step out of the way. LeFleur knew this. But he also knew the moment he called his bosses, he would be excluded from the process.”

Admittedly, interwoven throughout the story are news reports that felt incredibly jarring. News reporters would reflect on some of the victims of the sunken ship by detailing their life to date, and I found it didn’t add anything to the overall story – to be honest, I skipped these parts entirely. Additionally, these sections interrupted the narrative flow and the pacing, taking us out of the lifeboat and somewhere else entirely – I was always interested in the survivors more than the media element of the book.

Another area of the book I couldn’t quite get behind was the dialogue and language from the character claiming to be the ‘Lord’. At times, what he said felt caricature and stereotypical, and it detracted from the otherwise-engaging scenes.

“We made vain attempts at catching fish – from trying to club them to trying to grab them over raft sides – but without a hook, there is not much chance.”

Recommended for readers of short fiction and short stories – literary readers may also find something to love in these pages. Readership skews 30+