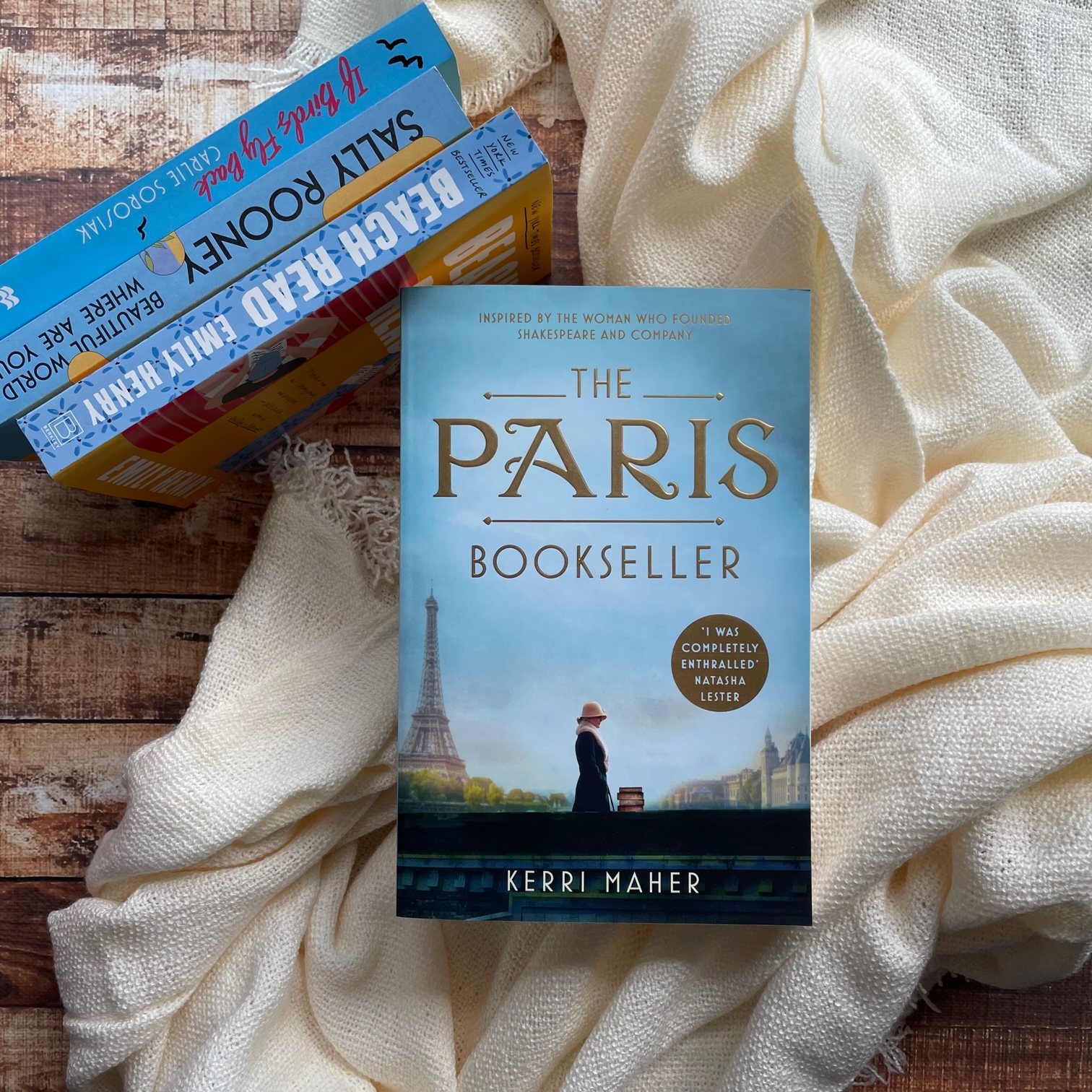 Young, bookish Sylvia Beach knows there is no greater city in the world than Paris. But when she opens an English-language bookshop on the bohemian Left Bank, Sylvia can’t yet know she is making history.

Many leading writers of the day, from Ernest Hemingway to Gertrude Stein, consider Shakespeare and Company a second home. Here some of the most profound literary friendships blossom – and none more so than between James Joyce and Sylvia herself.

When Joyce’s controversial novel Ulysses is banned, Sylvia determines to publish it through Shakespeare and Company. But the success and notoriety of publishing the most infamous book of the century comes at deep personal cost as Sylvia risks ruin, reputation and her heart in the name of the life-changing power of books…

Effortlessly capturing the atmosphere and world of 1920s Paris, Kerri Maher’s The Paris Bookseller is set during a pivotal time for Western literature, following bookseller Sylvia Beach as she endeavours to publish James Joyce’s controversial novel Ulysses, which had been banned in the United States. This is a fictional take on the events that transpired from 1919 through to 1936.

Written in third person, Sylvia Beach is crafted with depth and layering. The real Sylvia Beach has long been considered a pioneer and champion in the world of literature not just because of her bookshop Shakespeare and Company, but her involvement in assisting James Joyce on his plight to publishing his now infamous novel Ulysses. I suspect many readers who pick up this book will be largely unaware of who Sylvia was and how involved she was in bringing Joyce’s novel to life.

“Whether his characters were sitting in an outhouse or discussing Hamlet, Joyce spared no detail, leveling the vulgar with the sublime. Here was a book that brooked no compromises, and was unwavering in its clear-eyed portrayal of Stephen’s and Leopold’s minds and bodies.”

The book follows two plotlines. The first is Sylvia’s relationship with fellow bookseller Adrienne Monnier, and the second is her determination to publish James Joyce’s banned novel Ulysses, which presents itself a wealth of complications and hurdles, even after it’s completed.

Sylvia’s relationship Adrienne is probably the least enticing element of the book, and that’s purely because there wasn’t any drama in that storyline and so it felt a little dull. They were both incredibly supportive of each other, and those around them were supportive of their same-sex relationship. Nothing was really at stake between them, so I never felt overly invested in their relationship.

Sylvia’s friendship with James Joyce was the most engaging in the novel — her selflessness and his encompassing talent. He comes across unsure, anxious and at times, obsessive over his writing. And Sylvia remains loyal to him, even when she doesn’t need to be. Even when she must make sacrifices — largely financial — to continue working with him. Over time, Sylvia starts to realise Joyce’s true nature as his ego inflates and his success grows.

“She wasn’t sure how Adrienne did it, but no matter how late she’d been up, she was always in her store by nine, awake and smiling. Sylvia sometimes didn’t drift in until eleven, at which time Adrienne would her tongue at her, then give her some task to complete.”

The Paris Bookseller is very much about the emotional journey for Sylvia Beach and isn’t intended to focus too heavily on the journey of those around her. Whilst I would’ve loved a bit more of an exploration into James Joyce’s character, I understand that’s not what the author intended.

Admittedly, sometimes it did feel a little like a convergence of genres — part historical fiction, part women’s fiction. This was about bringing to life the time period and the setting, but also the bookshop and its journey, the significance of some of the literature we come across. But it was also so heavily rooted in Sylvia’s relationship with herself, her family, her career, her own insecurities, and her relationship with Adrienne. At times it just felt a little like the book wasn’t entirely sure where it wanted to sit within genre.

“Sylvia was touched by this scene of domestic tenderness, and all her questions about the hitherto seemingly mismatched man and wife were suddenly and forcefully answered.”