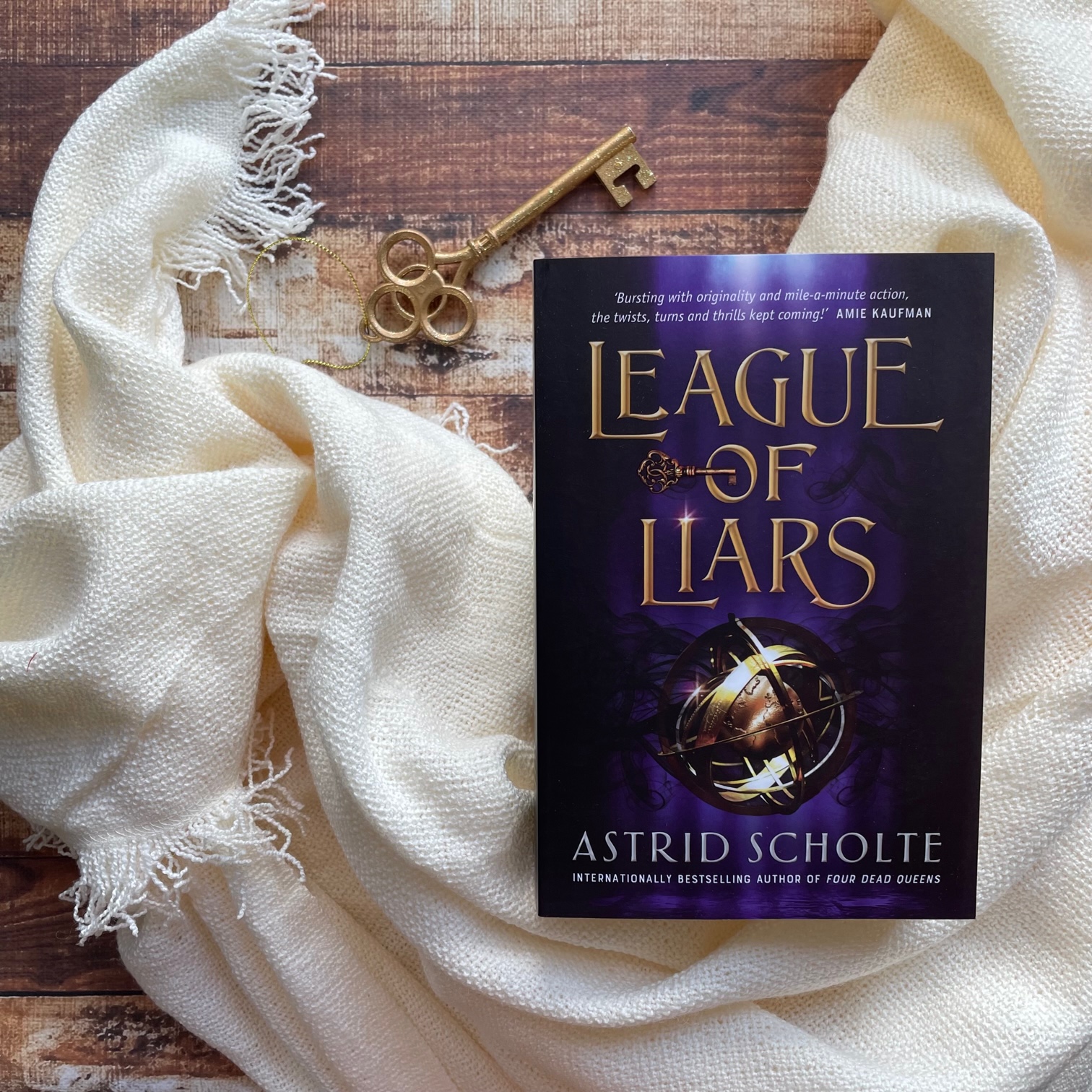 Ever since his mother was killed in a freak edem-based crime, seventeen-year-old Cayder Broduck has had one goal: to have illegal users of extradimensional magic brought to justice. Cayder dreams of becoming a prosecutor and, when he secretly accepts an apprenticeship under the city’s best public defender, he plans to learn every legal trick he can to one day dismantle defence arguments. Then he’ll finally be able to make sure justice is served.

But when he meets all three criminals he is to defend, he finds they are teenagers, like him, and their stories are … complicated, like his. As their cases unfold, Cayder must race to separate the truth from the lies and uncover what really happened the night his mother died

From the bestselling author of Four Dead Queens comes a heart-pounding mystery rife with secrets and danger, where nothing is as it seems…

Astrid Scholte’s third novel League of Liars is fantasy YA fiction, a thriller that races against the clock as we work to save four teenagers imprisoned for murder and the illegal use of magic.

The author’s strengths lie in crafting clever, addictive plots. She navigates multiple characters with unique backstories and voices, so the reader doesn’t get confused between chapters. I find her world-building to be intriguing and expansive, and the stakes consistently high. Characters struggle with secrets and loyalties, but over the course of the novel they come together to overcome the oppressing force.

“I didn’t want to cross the threshold; I hated the feeling of being lost within my own home. Homes were supposed to be full of love and laughter, not empty hallways and closed doors. My mother’s presence lingered within the walls…”

League of Liars is the first novel is a prospected trilogy, and this first foray into the series leaves enough left unsaid that readers will crave more. A lot of this book takes place in the one setting — prison — so I’m looking forward to travelling beyond this in the second book and discovering more about this world Astrid has crafted. I also look forward to finding out more about the magic system, because it wasn’t overly described in this book and I’m certain there’s more to come.

It’s always interesting to centre a YA fantasy around a group of morally ambiguous criminals, and when you embed a prison break into that story it’s clear you’ve got a story that young readers will love. Pacing is consistent and fast, with stakes only growing higher during each chapter.

League of Liars will please reluctant teenage readers, but also seasoned YA fantasy readers looking for the next tale to devour.

“A spark of fury burned within me. She knew the risks of going to Ferrington. She knew she was breaking the law. Now we would both pay the consequences. I felt like something had struck me in the back and lodged within my ribs.”

At times, I found the writing in need of tightening. There was a lot of telling rather than showing — emotions are described a lot, rather than letting actions and dialogue convey the character’s emotion.

I also felt that Cayder’s dialogue was a little over-dramatic and over-the-top during heightened moments, particularly revelations or moments or surprise or betrayal. Conversations where he’s trying to extract information out of someone else descended into desperate shouting and it made him feel one-dimensional. Stronger characterisation is awarded to Jey and Leta.

“Out on the horizon, a black streak cleaved the sky in two. Like a static bolt of lightning, but where light should be, darkness reigned. Known as the veil, it was the source of edem and many kids’ nightmares. A fissure between our world and another, allowing time-altering magic to seep through.”

Recommended for fans of young adult fantasy fiction; League of Liars reminds me of Shadow and Bone and Six of Crows, which should give an indication of audience. Readership skews female, 12+