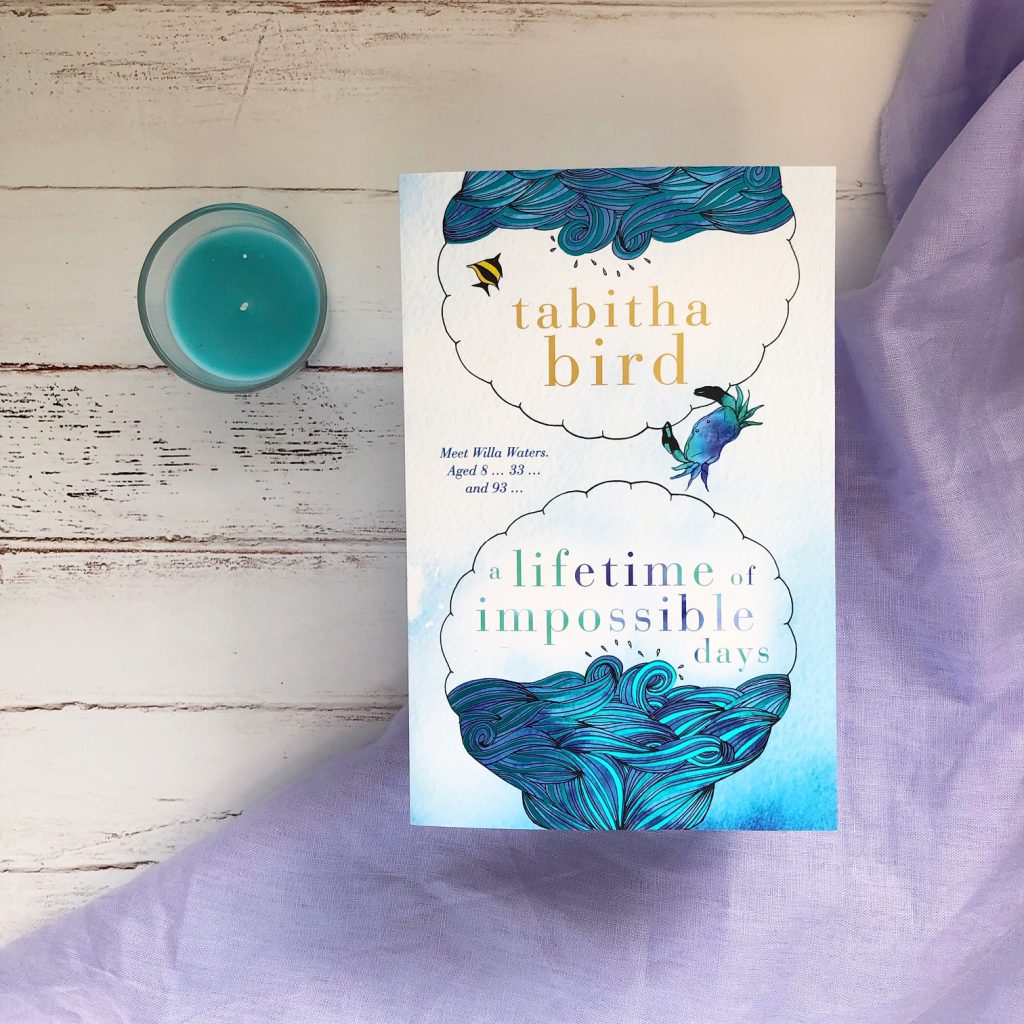 On one impossible day in 1965, eight-year-old Willa receives a mysterious box containing a jar of water and the instruction: ‘One ocean: plant in the backyard.’ So she does – and somehow creates an extraordinary time slip that allows her to visit her future selves.

On one impossible day in 1990, Willa is 33 and a mother-of-two when her childhood self magically appears in her backyard. But she’s also a woman haunted by memories of her dark past – and is on the brink of a decision that will have tragic repercussions . . .

On one impossible day in 2050, Willa is a silver-haired, gumboot-loving 93-year-old whose memory is fading fast. Yet she knows there’s something she has to remember, a warning she must give her past selves about a terrible event in 1990. If only she could recall what it was.

Can the three Willas come together, to heal their past and save their future, before it’s too late?

A Lifetime of Impossible Days by Tabitha Bird is a novel about family, loss, love and grief — it’s about the decisions we regret, and the ones we are yet to make. The book is an exploration of the human experience and how — no matter how hard it is — its important to face your fears and your regrets in order to overcome them, so that you can learn to forgive yourself.

The book is written in first person, but it moves between three different time periods — we meet the same woman, Willa, when she is 8, 33 and 93. At 8 years old, Willa is energetic and playful and kind. But her and her sister Lottie are subjected to abuse from their violent father. Their mother, who is desperate for guidance, is not able to leave her husband. And so Willa and Lottie live with a monster, with no foreseeable way out.

This particular storyline is really heartbreaking. Willa’s father brings so much tension to the story — he’s manipulative and cruel, and he causes such heartbreak in the family. Willa’s mother is trying hard just to survive, that she’s not in a position to be able to protect her children.

“With my eyes closed, I listen to the house. No sounds from Mummy and Daddy. After their fight last night, we won’t be going to school today. Mummy will stay in bed and when the school rings she’ll say we are sick.”
WILLA, 8

At 33 years old, Willa is feeling lost. She’s struggling mentally. She’s tried to help her sister so many times in the past, but Lottie has gone too far down a dangerous and self-destructive past, and Willa doesn’t think there’s anything she can do to help anymore.

Willa has two kids she’s looking after, and whilst her husband Sam is supportive and understanding and helpful, Willa feels like she’s drifting away. Over the course of the novel, we witness as this particular Willa struggles more and more and her mental health deteriorates as a result of her unacknowledged trauma.

“As I lie on the green tiles of my childhood bathroom, I am sore with the return of memories and thoughts of my sister. Lottie is a place men have visited, feasted on her starving need for them, and left. She is in my veins; we are one and the same place.”
WILLA, 33

At 93 years old, Willa’s memory is a little hazy. She requires a lot of help from others, and she’s estranged from her son. And she can’t remember why no one will talk about her other son. What happened to him? Is there some way she can fix this before it’s too late?

Willa’s childhood was a traumatic one, and her ability to time travel helped her cope with what had happened in her life, but only for a short time. Even at 93, Willa must learn to acknowledge her trauma and her grief and confront it. She may just be able to change the course of her life if she can connect with what happened to her as a child.

“Something has woken me. I don’t know if I nodded off for a little snooze, but Katie isn’t here and I’m guessing she has already left for the evening. Who can know if you drop off for a little nap when you are at that stage of life where you regurgitate events and everyone simply wants you to get to the point?”
WILLA, 93

The characterisation in the book is really strong — each Willa feels incredibly authentic. The voices are different, the actions and the motivations are different, and the dialogue accurately reflects the age of that particular Willa. I think Tabitha did a fantastic job of writing the same character at three different stages in her life.

A Lifetime of Impossible Days is best described as magical realism, because the three Willas have the ability to step into a different time in their lives. They can visit each other. Their backyard forms some sort of portal that allows them to escape their own timeline and enter either the past or the present.

At times the story felt a bit confusing because the nature of the time travel was a little convoluted, and there were definitely a few moments where I felt disorientated with where the story was going. I do also think the book lost a bit of momentum in the middle, but then it picked up again in the final third.

Despite the size of the book, I found myself heavily invested in the characters and the storyline. I felt compelled to finish the novel and I found the ending incredibly satisfying. Recommend for fans of literary fiction, and especially those that love a little bit of magic in their stories.