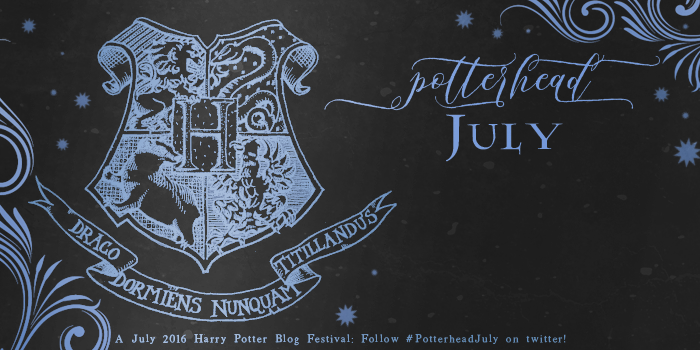 This month I’m participating in Potterhead July, run by Aentee at Read at Midnight. All month long, book blogs (about 85 of them!) are posting about Harry Potter! The bloggers have chosen what they’d like to talk about, and for my blog post, I’ve chosen to write about what it’s like to re-read Harry Potter as an adult when you spent so much of your childhood loving the books.

Some part of me wishes that I could read Harry Potter for the first time again, where the characters were unknown and the plot a surprise and the endings all shocking and suspenseful. Harry Potter is one of the greatest children’s book series that I’ve ever come across – J.K Rowling created a world of magic that every child wanted to be a part of, filled with wonderful characters and friendships and heroism.

I recently re-read Harry Potter again. I’ve re-read it many times since I was a child, and with each re-read I discover things that I didn’t know before. There’ll be a sneaky line between dialogue that hints at a twist later in the book – a sneaky line I had missed all those times before that I’d read the book. Or perhaps there’ll be a particularly hilarious conversation between two characters full of innuendos that I hadn’t understood as a child. And as a child, there would’ve been many ‘big picture’ issues about the Ministry of Magic and the betrayal from certain characters that I just wouldn’t have understood, but I now do.

Re-reading Harry Potter as an adult can be very rewarding. The first few books are quite short and don’t take long to read, and you come to understand more about the world and the characters. However, what you miss is that childhood love for the world and that desperation to keep reading to find out about more spells, characters, secret passageways and potions. The entire series is complete and re-reading it is not going to stop that.

J.K Rowling could easily begin a new series in this world – James and Lily Potter’s story, or perhaps the story of Harry’s son at Hogwarts. I have no doubt J.K Rowling could come up with a villain just as scary and brilliant as Voldemort. But maybe we don’t need another series. J.K did such a marvellous job of making sure that every question was answered at some point in the series. Things that happened in the second book made sense in the sixth, even though we didn’t even pick up on anything being wrong (I didn’t think twice about Riddle’s diary until it was revealed to have been a Horcrux all along later in the series).

Maybe Harry Potter is meant to be one of those series where you spend your adult life participating in multiple re-reads. But if we had magic like the characters in the book, wouldn’t it be just fantastic if we could travel back and read it for the first time all over again?